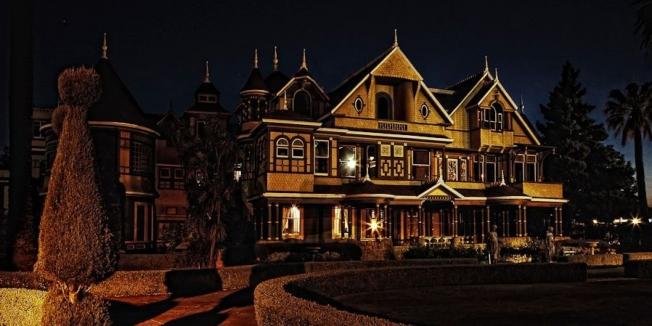 A spooky true story that would make a great horror movie!

There is a mansion in San Jose, California unlike any other. Steeped in mystery, the once 8 room house, over 38 years, was transformed into a sprawling mansion that meanders across 6 acres, with 160 rooms, 10,000 windows, 2,000 doors, 47 stair ways, 13 bathrooms and 6 kitchens. From the outside you could mistake this house for a dream luxury home but take a closer look and you will see its creators past holds a terrifying secret and its bizarre interior layout, makes the history of this house a very intriguing story indeed. Stair ways that lead to ceilings, doors that open to brick walls and endless mysterious designs like hidden passageways in the walls, leave many unanswered questions about its history.

Born in 1840, Sarah Lockwood Pardee enjoyed a privileged upbringing, attending private schools with the highest standard of education; she spoke four languages and was a stunning pianist.

During the year of 1862 she married Lieutenant Governor of Connecticut and manufacturer of the famous Winchester repeating rifle, William Wirt Winchester. Leading a happy marriage, they gave birth to a beautiful baby daughter named Annie, but in 1866 tragedy struck when she died suddenly from the then mysterious childhood disease marasmus.

Mrs Winchester was said to have struggled to come to terms with her daughter’s death and suffered for many years as a consequence. When tragedy struck her life again some fifteen years later when her husband also died prematurely from tuberculosis, she was unable to cope and spiralled into a dark world of depression, seeking help from a spiritualist.

She paid many visits to see a Medium who told her that her family and fortune were being haunted by spirits of the American Indians and Civil War soldiers who were killed by the guns her husband had created. She was led to believe the deaths of her beloved daughter and husband were of a direct consequence of this and the next victim in line would be her if she did not take precautionary measures.

She was told to move west and please the good and bad spirits by building a great house for them. As long as building would never cease, she would be in no danger. It was said that by building this endless house that she would be safe from the spirits and be given eternal life.

Shortly after, she left Connecticut to stay with her niece in Menlo Park, California. While on the hunt for her new home she stumbled across the perfect property. In 1884 she purchased an unfinished farmhouse on a huge plot of land near San Jose and set about her task.

Construction of The House

She set to work right away, hiring carpenters to work shifts 24 hours a day 7 days a week. With a $2,000,0000 inheritance and a $1000 a day income, money was never an issue and the work would continue endlessly across the next 38 years. Firmly believing in the spirits that haunted her, she began to implement perplex designs within her home to confuse the bad spirits and fit lavish interiors within certain rooms to welcome the good. Miles of maze like hallways are made all the more fascinating by secret passageways in the walls with hidden doors. There is a staircase which has forty four steps over seven flights but only climbs 9 feet high, with each step being only two inches tall and a door that leads to the outside of the house from the first floor! Throughout the house many staircases lead to ceilings and strange arrangements like windows in floors give the building an eerie feel.

Every morning she would meet with John Hanson her foreman to discuss new changes and plan new rooms and sections of the house. Some rooms were modelled many times over and an estimated 500-600 rooms were built in total, yet only 160 remain. Some think this is the reason for blocked passageways and others say it was a deliberate plan to confuse the spirits. Many rooms were built and ordered to be destroyed but once she was satisfied that a room was complete, the task of fitting it with the most luxury of furnishings was set about. Imported Tiffany glass windows, gold plated chandeliers, Swiss moulded bathtubs, silver and bronze inlaid doors and endless other luxuries completed these rooms.

Parquet floors spread throughout the entire house made up of beautiful rosewood, mahogany, oak, teak, maple and white ash mosaics. One man worked tirelessly on these floors for thirty-three years in total, nothing but ripping up, building and installing floors throughout his entire time of working there!

Perhaps the most luxurious room of the house was the elegant Grand Ballroom, which cost around $9000 at a time when an entire house could be built for just $1000. Two beautiful leaded stained glass windows stood centre, each inscribed with a Shakespeare quote and the interior was made up of the best that money could buy. This room was sealed off after the earthquake of 1906 which left the house severely damaged and in need of repair. Mrs Winchester saw the earthquake as a sign from the spirits that she had spent too much money building the front section of the house, so once the damage was repaired, she immediately had this section of the house sealed off, the Grand Ballroom included.

She reportedly wore a dark veil to cover her face wherever she went and rumours of her firing staff that caught a glimpse of her face were rife. She never slept in the same room two nights in a row through fear of the spirits and ran a ritual every night of weaving through the hidden passageways and staircases before settling for the night, in order to confuse the angry spirits. She also visited the Séance Room once a night as described in the 1928 addition of American Weekly, six years after her death.

“When Mrs. Winchester set out for her Séance Room, it might well have discouraged the ghost of the Indian or even of a bloodhound, to follow her. After traversing an interminable labyrinth of rooms and hallways, suddenly she would push a button, a panel would fly back and she would step quickly from one apartment into another, and unless the pursuing ghost was watchful and quick, he would lose her. Then she opened a window in that apartment and climbed out, not into the open air, but onto the top of a flight of steps that took her down one story only to meet another flight that brought her right back up to the same level again, all inside the house. This was supposed to be very discomforting to evil spirits who are said to be naturally suspicious of traps.”

The building work that took place at the Winchester Mystery Mansion never ceased in nearly 38 years. By the turn of the century the original 8 room house had become a seven story mansion set on 161 acres of beautiful farmland, full of stunning gardens and orchards of plum, apricot and walnut trees.

Throughout her later life she had suffered very painful arthritis and she passed away from heart failure in her sleep on the 5th of September 1922. In her will she left generous cash sums to her favourite employees and family members, and a substantial sum to the Winchester Clinic of the General Hospital Society of Connecticut, intended for the care and treatment of tuberculosis patients. The personal property including all of the luxury furnishings within was left to her niece Mrs. Marian Merriman Marriott who auctioned it all for a grand sum.

She never kept a journal or had a documented interview, but her story remains as one of great intrigue. Through her grief stricken state and the belief in her medium, this curious house was created and to this day is open to the public to view and to be used for special events.

Guides must warn tourists not to wander from the group as some have been known to be lost for hours in the maze of corridors and baffling layout. They flock from all over the globe to witness this bizarre home in which Mrs Sarah Winchester spent her years lovingly creating her masterpiece and marvel over unanswered questions of the mysteries that lie beneath its walls.