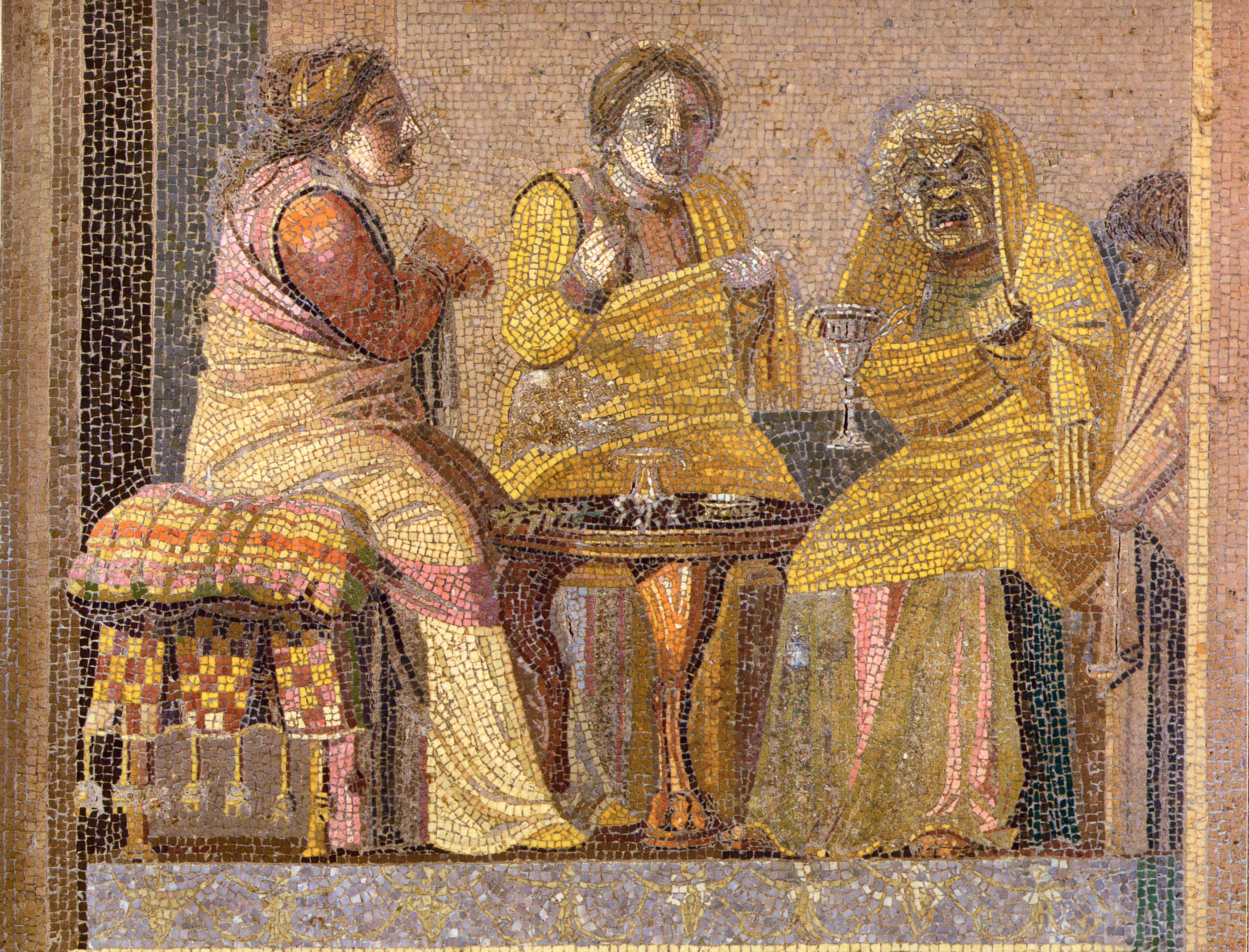 They might not have been Catherine the Great, but they were more than just expansion of their husband.

In Ancient Rome, men ruled the world. Everything resolved around men: they were the most dominant figures in politics, literature, academic work, mathematics, science, and everything else .Women were not allowed direct role in politics. To make matters even more interesting, only male writers have shed some light on women in Ancient Rome. And they wrote only about women that were part of the political elite.

As a result, we see few if any women with real power in Roman history. However, there were some women that deserve a spot in history. They might not have been Catherine the Great, but they were more than just expansion of their husband. Let’s take a look at some of them.

We start with the mother of Julius Caesar, who lived from 120 to 54 BC. She became a widow when young Julius was just a child, so she was forced to raise him herself. She had help from her two sisters, one of which was the grandmother of Augustus (another Roman emperor). Aurelia was part of the high society in Rome. Her family was influential, a highborn patrician one.

Aurelia also helped Caesar raise his daughter Julia. Her biggest success was helping Caesar survive for long years on the throne. Young Julius was about to be executed at the age of 18 by the dictator Sulla. But Aurelia intervened, saving her son’s life.

She is described as “Ideal Roman matron” by some of the historians, notably Tacitus. Aurelia also received high praise from Plutarch, who says she was “respectable and strict woman”.

She was the last queen of Rome. Not many women ruled Rome, but Tullia was one of them. She is remembered by historians as a “symbol of parricide”, the worst crime in Ancient Rome. She was a daughter of Servius Tullius, the sixth king of Rome.

Her father arranged her marriage with Lucius Tarquinius, and she took advantage of her husband’s aspirations. Tullia conspired with her husband to overthrow and murder her father, making her husband the ruler of Rome. Her husband ruled for some time, but when the Roman monarchy was ended by Lucius Junius Brutus, she was exiled from Rome along with her husband and family. Tullia was also given a special role in history “the murder of her own father”.

When a character is based on your story, you know you’ve been influential person. Lucillia is known as the woman who married her father’s co-ruler at the young age of 14. His name was Lucius Verus, and after his death, she remarried. Her second husband was Marcus Aurelius, and she traveled with him during the Danube military campaign.

After the death of Aurelius, Commodus became an emperor. She was one of the plotters to have him killed because of his disturbing actions. She was the mastermind behind the assassination plot, along with her daughter, nephew and two cousins. She was to become an empress, but the scheme failed. As her nephew shouted and tried to stab Commodus, his guards reacted and saved the emperor. Lucilla was banished from her hometown Capri. Speaking of the character based on her story, the character appears in the Hollywood hit movie “Gladiator”.

She lived in the sixth century BC, and she became a Roman virtue personified. There have been many painters, writers and artists trying to capture her character. She is subject of Rembrandt’s painting called Lucretia, as well as a poem by Shakespeare, called “The Rape of Lucretia”. A wife of a nobleman, Lucretia was beautiful and virtuous. The son of the King at the time raped her, and because of that she extracted an oath of vengeance from her husband and father. The vengeance was against the family of the King, but she stabbed herself to death.

Roman literature tried to understand for centuries why the victim killed herself. At the time, rape was portrayed by Roman notions as dishonor for the husband and the family, not for the woman.

She was an influential orator, and her speech before the Second Triumvirate was one to remember. She gave the speech in 42 BC, and at the time Rome was at war with Cassius and Brutus. Caesar’s assassins killed the rich people, confiscated their property to get more money, and in the end decided to impose a tax on wealthy women in the Roman Empire.

At the time, women had no say in politics, so they were furious for the tax. Hortensia made sure Rome recognized the anger of the women. She said:

“You have already deprived us of our fathers, our sons, our husbands, and our brothers, whom you accused of having wronged you; if you take away our property also, you reduce us to a condition unbecoming our birth, our manners, our sex. Why should we pay taxes when we have no part in the honors, the commands, the state-craft, for which you contend against each other with such harmful results? ‘Because this is a time of war,’ do you say? When have there not been wars, and when have taxes ever been imposed on women, who are exempted by their sex among all mankind?”

Some of the influential people in Rome at the time, mainly Antony and Octavian were not happy, but the speech helped. Rome agreed to tax only 400 women, and the rest of the money were borrowed from men.

Known as the iconic Roman mother, intellectual and wife, Cornelia had 12 children. She married an older man, who was a bitter enemy of her father, just so she bring peace to two rich and powerful families. Her husband was 25 years older, and she gave birth to 12 children to him, but only 3 survived childhood.

Nowadays, Cornelia is known as “The Mother of the Gracchi”. She was one of the first to embrace the Greek Culture, and remained a widow after her husband’s death. She did enjoy a princess-like status, and her biggest influence was in her relationship with her sons. She was very active in the political career of Tiberius Gracchus and Gaius Gracchus. She retired in Rome after her son’s death, and remained there until her death. She was worshiped for her virtues, and after her death, Rome voted for a statue honoring Cornelia.

Back in the days of Ancient Rome, only male figures appeared on official coins. But that all changed with Octavia, who was the first Roman women to appear on the coin. The sister of Octavian, the first Emperor of Rome, she was also the fourth wife of Mark Anthony.

She was a really good person, agreeing to take care of all Mark’s children from his third wife. She continued to love him, even though he left her for Cleopatra. At her funeral, her brother, now Augustus, delivered an oration, which was unusual for a woman. Even though she was one of the most liked characters in Roman history, she was also responsible for some of the worst Roman Emperors. Nero, Claudius and Caligula are her direct descendants.

If there is one woman that was politically involved in the Roman Republic, that is Fulvia. The granddaughter of Cornelia Africana, Fulvia is known as the wife of Publius Clodius. After his death, she dragged his body and caused a riot among his followers. She inherited her husband’s powers in Rome gangs, and then married another populist, Scribonius Curio. Her last marriage was to Mark Antony, and defended him even though writers like Cicero were attacking Mark for marrying Fulvia for her money.

After the death of Caesar, she was involved in the proscriptions, and she was left in charge of Rome when Antony and Octavian went to fight Brutus.

After Octavian’s victory, she escaped to Greece, met her husband Antony, told him she incited a war, and died shortly after of unknown causes.

Not many female writings have survived from the Roman Empire, but Sulpicia is one of thoe women who had her Latin poetry survived.

She lived during the reign of Emperor Augustus. Sulpicia wrote many love poems, but only six of them have survived the test of time. But the fun part is that her poems were published under the name of a male pot, and for many centuries, people believed the poems were his.

Arguably the most influential woman in Roman history, Helena was responsible for bringing Christianity to Rome. She was the mother of Emperor Constantine, and managed to persuade him to accept Christianity. Once Constantine made his own contribution in accepting Christianity, the new religion became the heart of the Western Civilization.