The Holy Grail and five more alleged relics of Jesus 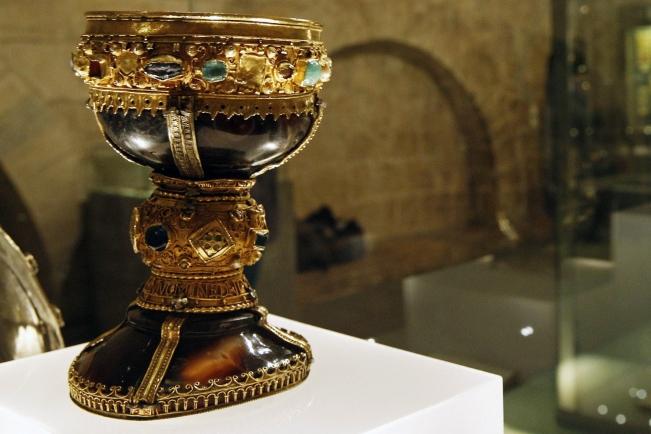 ​People always felt a strong need to get close to objects that are associated with Jesus Christ, the founder of Christianity. In recent years, we’ve seen Jesus appearing on a toast, on foreskin, and on many other objects that people believed have some religious mystery behind it. However, apart from those mysterious objects popping out in the world, there are some relics that Churches believe are relics of Jesus. Here are some relics that have found a spot in churches and cathedrals.

People always felt a strong need to get close to objects that are associated with Jesus Christ, the founder of Christianity. In recent years, we’ve seen Jesus appearing on a toast, on foreskin, and on many other objects that people believed have some religious mystery behind it. However, apart from those mysterious objects popping out in the world, there are some relics that Churches believe are relics of Jesus. Here are some relics that have found a spot in churches and cathedrals.

This is the cross that according to Christianity, Jesus was crucified on. The original cross is believed to be preserved and is kept secret in some church. Aside from the original cross, there are thousands of wooden crosses around churches and cathedrals in the world. The cross is powerful symbol for Christians and Christianity and an object of veneration. There are four plausible versions what happened to the Cross. According to Eusebius, the cross served as the core for the Temple of Venus in Jerusalem. While he doesn’t mention that the Cross has been found, Eusebius believes that after the Jewish revolt, Hadrian reconstructed the temple on top of the remaining pieces of the True Cross. The second version is of Socrates Scholasticus who reports that the crosses were found under the pagan temple that was destroyed. The three crosses were then sent to Constantinople (nowadays Istanbul). Theodet and Sozomen confirm this theory, but add some details.

The Crown of Thorns

Three of the Gospels in the Bible report a Crown of Thorns was placed on Jesus’s head, and he wore it until he was crucified. The woven crown was placed on his head to cause him pain, but also serve as a mockery asset for Roman soldiers. The crown questioned Jesus’s claim of authority, as he was claiming to be the King and savior. According to some reports, the same crown is kept and housed at the Notre Dame Cathedral in Paris. Whether it is the true and original crown, or a replica, nobody can confirm. Even Notre Dame officials can neither confirm its authenticity, nor deny it. No matter the fact, the crown is still revered. The Crown of Thorns is presented to Christians on the first Friday of each month. The crown is also presented for veneration every Friday during the pre-Easter period.

Kept safely within the Cathedral of San Salvador in Spain, the Sudarium of Oviedo (Shroud of Oviedo) is a piece of cloth that is mentioned in the Gospel by John. According to the Gospel, the cloth was used to wipe the blood out of the head of Jesus. The Messiah’s head wrapped around his head after he was crucified. King Alfonso II built the small chapel with specific purpose to house the alleged relic. The Sudarium is displayed for veneration three times during the year. The first time the cloth is displayed for the public is on Good Friday, then for the Fest of the Triumph of the Cross on 14th September and for the Octave on 21st September. The authenticity of the Sidarium is debated.

For centuries, the Holy Prepuce was considered to be the only piece Christ’s flesh to remain on Earth and believers were trying to find it. The Holy Prepuce is essentially the foreskin of Jesus Christ. According to Jewish tradition back in the days, Jesus was supposed to be circumcised after he was death. According to an apocryphal text, the foreskin was saved in an alabaster box. During the middle ages, there were countless of “foreskins” that were presented as relics. In 1900, the Catholic Church stops the madness and the quest for the Holy Prepuce, declaring that people talking about the foreskin will be excommunicated. Then, in 1983, during the New Year’s Eve, Father Don Dario, serving in a tiny village in Italy, declared that the “true foreskin” and the relic was stolen from his Church.

The Holy Grail is the most saint relic in Christianity, as it is believed to be a chalice Jesus drank from during the Last Supper. There are countless of theories about the Holy Grail, as the relic has inspired movies (Indiana Jones and Monty Python), but also was subject of controversy during modern times. For example, in his book “The Da Vinci Code”, Dan Brown writes that the Holy Grail is actually the remains of Mary Magdalene, and it is buried beneath the Louvre museum in Paris. There are also traces of the Grail in Celtic Mythology and legends. The first written legend where the Holy Grail is mentioned dates back to the 1100s, in a poem that tells a story of the knight Perceval. He saw the object during a mystical feast. While the Holy Grail was never found and the authenticity is not confirmed, there are churches and cathedrals in the world who claim to hold possession of the Grail. Those churches are O Cebreiro in Spain, Saint Mary of Valencia Cathedral, the monastery of San Juan de la Pena in Jaca, Spain and others.