In the era of Fifty Shades of Grey, it is still hard to fandom and imagine what an 18-th century libertine did back in the days. The Marquis de Sade is widely regarded as the world’s first sexologist, and a chocolate addict who used chocolate for sex. Born on June 2, 1740, Donatien Alphonse Francois, or as he was known by the name Marquis de Sade was a famous writer, sexologist, politician, philosopher, and a French aristocrat. He died on December 2, 1814. Some of his novels were published under his own name, while others were published anonymously due to problems he had with prison and conflict with the French government.

It is a well-known fact that Sade lived a scandalous and libertine life. He was repeatedly accused of blasphemy, which was a serious offense at the time. He procured young prostitutes as well as employees of both sexes in his castle in Lacoste. It is there where he enjoyed freedom from all morality and ethics. A good example of his freedom was having an affair with the sister of his wife.

He lived in Paris, and all of his problems started when prostitutes complained about mistreatment by him. He was put under surveillance by the police. After several brief incarcerations, he was exiled to his chateau at Lacoste in 1768.

The first scandal happened in 1768 on Easter Sunday. A widow-beggar, Rose Keller, approached him and asked for job. He told her she could make some money by working for him. Rose thought she would be a housekeeper. But at his chateau, he ripped her clothes off, threw her on a divan, and tied her by the four limbs face down. She was not able to see behind her. Then, he continued his sadistic behavior, whipping her and making various incisions on her body.

In 1772, another scandal broke involving incapacitating of prostitutes with the Spanish fly, a supposed aphrodisiac. After the incident, Sade flew to Italy, taking his wife’s sister with him. He returned to his chateau at Lacoste in 1776, and hired servant girls on which he performed sexual acts.  In 1784, he was transferred to the Bastille, where he stayed until the storming of the Bastille during the French Revolution. In prison, he wrote most of his famous novels, including “120 days of Sodom”.

There are many aspects of the life of Marquis de Sade that you can look into. But his most interesting aspect is his love life, and his writings. His writing has been tagged under different titles. Some classify it as pornography, others as Gothic and baroque writing. But the best classification is “libertine novels”. Let’s not forget, Giovanni Boccaccio wrote the widely-regarded first libertine novel, the Decameron.

But Sade took them to another level. His most famous libertine novels include Justine (The misfortunes of Virtue), Juliette, The 120 Days of Sodom, and Philosophy in the Bedroom. That last one is why he is widely regarded as the first sexologist.

All of his works challenge traditional perceptions of sexuality, religion, age, gender, and much more. He has his very liberal opinions on sexual violence, sadism, and pedophilia. All of his opinions will stun contemporaries of Sade who were quite familiar with the dark theme of his Gothic novels. The main and primary rule in his books is suffering. Sade believes that without pain, there is no pleasure, and that is extremely important in sex. And one can make the argument that his libertine novels strengthened his individualist arguments.

The best way to understand a person like the Marquis de Sade is to read his books. Here are just some short quotes from his books that will help you understand his vision.

“Conversation, like certain portions of the anatomy, always runs more smoothly when lubricated.”

“When she's abandoned her moral center and teachings...when she's cast aside her facade of propriety and lady-like demeanor...when I have so corrupted this fragile thing and brought out a writhing, mewling, bucking, wanton whore for my enjoyment and pleasure.....enticing from within this feral lioness...growling and scratching and biting...taking everything I dish out to her.....at that moment she is never more beautiful to me. ”

“In order to know virtue, we must first acquaint ourselves with vice.”

“It is only by way of pain one arrives at pleasure”

“Fuck! Is one expected to be a gentleman when one is stiff?”

“Sexual pleasure is, I agree, a passion to which all others are subordinate but in which they all unite.”

“What does one want when one is engaged in the sexual act? That everything around you give you its utter attention, think only of you, care only for you...every man wants to be a tyrant when he fornicates.”

“If it is the dirty element that gives pleasure to the act of lust, then the dirtier it is, the more pleasurable it is bound to be.”

“Sex'' is as important as eating or drinking and we ought to allow the one appetite to be satisfied with as little restraint or false modesty as the other”.

Germany is one out of nine European countries that have legalized prostitution. It is legal and regulated in Germany, as well in the Netherlands, Austria, Switzerland, Greece, Hung...

12:51
Sexuality
Abuse Documentary: The Shame of the Catholic Church

Sexual abuse in the Catholic Church has been making headlines for years. Some priests have been punished, but what about the bishops who shielded them?This documentary takes a look...

53:51
Sexuality
Sex for Grades: undercover inside Nigerian and Ghanaian universities

Universities in Nigeria and Ghana have been plagued by stories of sexual harassment by lecturers and professors for decades.Allegations include a wide array of abuses, from blackma... 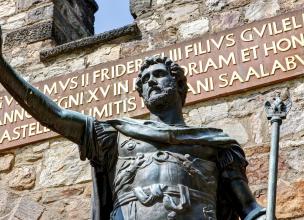