Genghis Khan War Tactics – How he Built the Mongol Empire 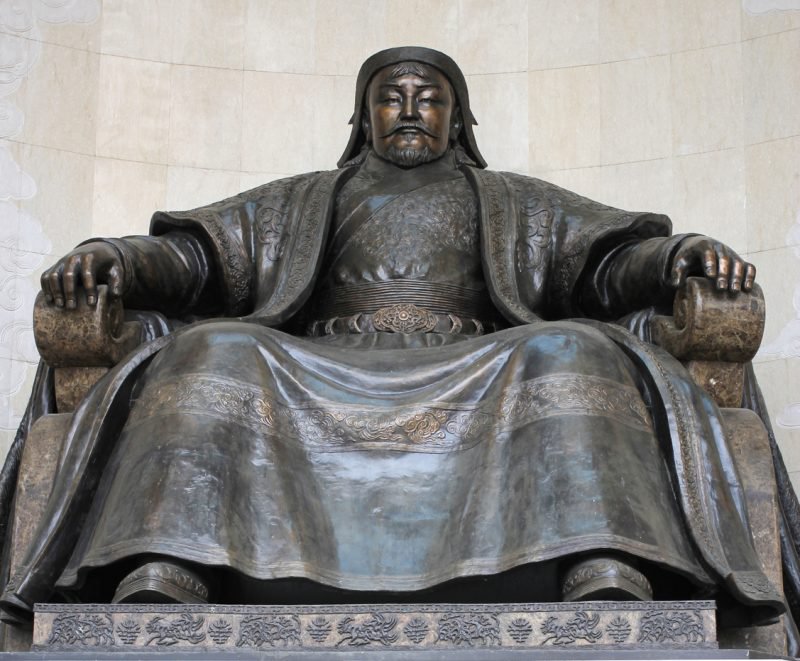 In 25 short years, Genghis Khan and his army conquered more lands and people than the Roman Empire did during 400-year rule

The Mongol Empire existed during the 13th and 14th century. At the time, and still, it is the largest contiguous land empire in history. And it was all thanks to Genghis Khan and his brilliant tacticians. After uniting the nomads, Genghis and his officers led a Mongol army of 100,000 men to a series of military campaigns to expand their territory.

They started by invading China, which at the time consisted of three separate states. From 1207 to 1227, Genghis captured large parts, but it was his grandson Kublai Khan who completed the conquest of the territory years later. From 1218 to 1220, Genghis defeated the Khwarizm Empire, which at the time included parts of Iran, Turkmenistan, and Uzbekistan. They defeated the empire after being rebuked in their efforts at peaceful trade. And after defeating the Khwarizm Empire, they pursued fleeing members of the empire into the Ukraine, all the way to Kiev. Genghis began a series of Russian campaigns that were also successfully ended later by his grandson Batu.

In 25 short years, Genghis Khan and his army conquered more lands and people than the Roman Empire did during 400-year rule. These are the strategies the Mongols used to conquer the most land in history of mankind.

These spy networks spent months before an attack happens to scout defenses, map roads, and escape routes. They also noted supply sources, and gathered intelligences on local defense and infrastructure. This allowed Genghis Khan to enter a battle more ready than his opponent, and use the best strategy for attack. Some of their strategies included catapulting large stones or diseased animals over the walls, isolating the city and cutting off supplies to starve the inhabitants, lighting extra campfires and placing straw soldiers on spare horses to make the army appear large than it was, and damming or rerouting a steam to flood the town.

Communication was not as easy as it is nowadays. Nowadays, you can get almost anyone you want in a second. But back then, communication between different parts of the army was truly challenging. But it was also an area where the Mongol army exceled. Their rapid communication team included swift riders and a system of relay stations to pass messages to and from the battlefront.

This is one of the most famous tactics used by Genghis Khan. Because they had a small army, Mongols took care of every soldier. Losing a man in battle due to a mistake was considered unacceptable. When facing the enemy, the army would split into small groups of three to five soldiers. This prevented the enemy from surrounding the army. And when the enemy regrouped, the Mongols regrouped as well. The army appeared suddenly, like something dropping from the sky, and disappeared like lighting. 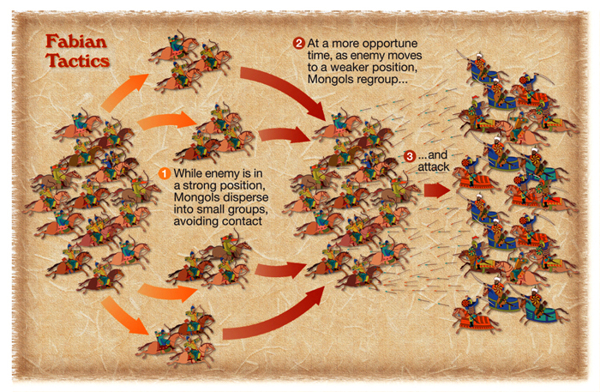 This tactic was known as the Chisel Attack tactics. The group of cavalrymen would make a direct charge into the enemy line. And if the first charge failed, a second or third group would attack. No matter how great the opposition was, they were unable to withstand the charges. And in the end, in response to a signal, the Mongol cavalrymen would charge from all directions into the enemy line in order to destroy the enemy’s formation.

The throw-into-disorder strategy was used when the enemy was strong on the battlefield or sheltered in a fort. The Mongol army would herd oxen and wild horses into the enemy lines to confuse the enemy.

Wearing down the enemy

When the enemy stood in a defensive position and prevented a cavalry charge, the Mongols used a different strategy. They withdrew their main forces, leaving only a few small detachments to harass the enemy by shooting arrows. Lack of food, water, and rest would cause the enemy to move eventually. And one they moved, the Mongol army launched a surprise attack.

Mongols often tried to lure the enemy into an ambush. They did this by feigning retreat as soon as the battle started. They deliberately threw away gold and silver. These strategies were used when they could not break into heavily fortified cities or through a strong pass. They gave the impression of giving up. The moment the enemy went for the gold and silver, and was lured into the enemy, the main Mongol army appeared in a pre-arranged ambush.

44:05
History
New
Why The Romans Were So Effective In Battle

The Roman Empire was the post-Republican period of ancient Rome. As a polity it included large territorial holdings around the Mediterranean Sea in Europe, Northern Africa, and Wes...

History
What Happened to the Spanish Armada?
In 1588, King Philip II of Spain sent his fleet to collect the army from the Netherlands, where they were fighting. The ...
Pyramids of Sudan – The Forgotten Nubian Pyramids
Did you know Sudan has almost twice as many Pyramids as Egypt? To be precise, Sudan has 255 pyramids scattered across th...
Weapons of Mass Destruction – Types and Examples
There are three main types of WMD, biological, chemical, and nuclear. NATO adds radiological to this list. Let’s take ...
7 Egyptian Secrets that Will Surprise You
As one of the earliest civilizations in the history, Egyptians contributed so much to humanity. They had numerous discov...