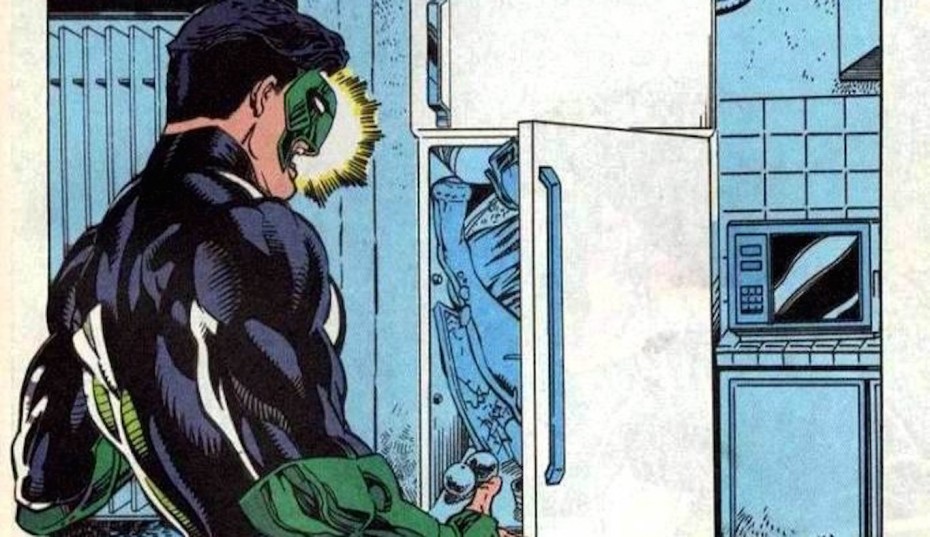 In the world of comics and superheroes, men are usually the heroes. Women, on the other hand, are mostly seen as secondary heroes, or as means to support the primary character. Men usually can fly, fight with heroic mannerism and escape every death scenario. Women, not so much. Aside from few comic books written specifically for female characters such as Wonder woman, Cat Woman, Black Widow, Raven, Supergirl, and Ms. Marvel, most female characters in comic books end up as dead, all in order to hype the male character, or give him a sense for fighting and revenge. The phenomenon, called “Women in refrigerators” have become a popular term to describe a situation in which a female character has been killed just so male superheroes can look more prominent. Here are seven most important women characters that were killed to fuel the stories of the male hero.

Alex is the original woman in refrigerator, as she was the first one that was used for fueling the story of the male superhero. The comic book writer Gail Simone noticed that females in comics are misused, and they rarely help defining the story. She decided to kill the main female character, and use the term “Women in refrigerators” for the first time. The event occurred in Green Lantern #54. In the comic, Kyle Rayner, or the Green Lantern returned home and found a note to look inside the fridge. In the fridge, Kyle found the mangled remains of girlfriend, which fueled his desire for revenge and defined the story onward in the comic book.

If Alex was the first, Gwen Stacy is probably the most famous death in comics, since she appears in one of the most popular comic books, Spiderman. In the comic book, Stacy was dropped off the Brooklyn Bridge by Spidey’s nemesis, Green Goblin. When Spiderman tried to save Stacy, her neck snapped and she lost her life. The event gave Parker the angst and hunger to battle the Goblin. What is interesting though, is that in the movies, Mary Jane was the one dropped off the bridge and Spiderman actually saved her.

This death also occurred in Spiderman. Notice a pattern there? Some people call Black Cat the marvel version of Catwoman, as she is also an acrobatic cat dressed burglar. And she is also a love interest for Spiderman in the comics, but it is more of a shameless flirt than huge love. However, she is used to fuel a story in Spiderman, where she is described as a woman that was raped by a drug dealer, and she was also raped in college. The dark side of the events made Spiderman eager to fight, and the mini-series of the white-haired Black Cat surely gets the nod for one of the more interesting stories.

Linda Park is the victim of plain old Professor Zoom, who wants Flash to understand tragedy and become a better hero. The writer of the comics, used Linda Park to fuel the understanding of tragedy for Flash. Linda Park was Flash’s wife, and Zoom injects tragedy into the story by killing off Linda, all while he makes sure that she aborts the twin fetuses she carries. And while in alternative comic books Flash traveled back in time and saved Linda and their children, one comic specifically kills off Linda. In the fight with Professor Zoom, flash creates a sonic boom which injures Linda.

Wasp has been part of many Marvel stories, but her Ultimate Wasp story is used specifically fuel a story. And what is more interesting, she does not fuel the wrath of her husband Ant-man, but of Captain America. In the Ultimate Wasp 10 story, six issues into the story, Wasp gets in a fight with her husband who hits her. After she shrinks, he uses spray to attack her, and even orders a gigantic ant attack on her. Wasp survived, but she was hospitalized, and the act fueled Captain America’s anger who tracked down Ant-man (then a fugitive) and beat the crap out of him.

One of the most popular ninja women in comic books, Electra was created in the 80s for the purpose of the Daredevil story. She was killed in Daredevil #181. Back then, she served as Kingpin’s top assassin, and she was tasked to kill Foggy Nelson, a partner of Matt Murdock (the alias for Daredevil). For Murdock’s sake (who was also her lover), she spared the life of Foggy. Bullseye, another top assassin for Kingpin, took the opportunity and killed Electra just so he can stay No.1 assassin. She was impaled by a sai by Bullseye, and she managed to crawl back to Daredevil’s doorstep where she died in his arms. The event fueled Matt Murdock’s desire for revenge. Elektra first appeared in issue #168 as the college love interest of Murdock.

One of the most famous “Women in refrigerators” is Maria Castle, the wife of Punisher. Her story was specifically used to explain the backstory of Punisher, and how he became the vengeful killer we all know and adore. In his past, Punisher, known as Frank Castle was a special forces officer married with Maria, the mother of his two children. He was a target of many criminals, but the worst thing happened when his family was gunned down during a picnic. The event, in which his family lost their lives, completely and emotionally destroyed Frank, who then became the Punisher. The event is even more horrific in the 2004 movie, the Punisher, where almost all of his family is brutally killed at the gathering, not just his wife and children, but cousins and relatives as well.

Strange
David Copperfield - The Mystery behind the Tricks
The secret of the tricks has never been publicly explained. However, there are ways to explain how he does the tricks. O...
Clementinum in Prague is one of the world's most beautiful libraries
Nowadays, the Clementinum remains a vast complex of beautiful baroque and rococo, serving as a reminder of a period in w...
Japan - The home of world's most beautiful festivals including Cherry Blossom Lantern Festival
Some of the festivals celebrate Japanese culture, while others are celebrate times of the year
Guide to Studying Film Production at University
Want to take your passion for documentaries to the next level?