Weirdest and Most Brutal Ways of Torture in History 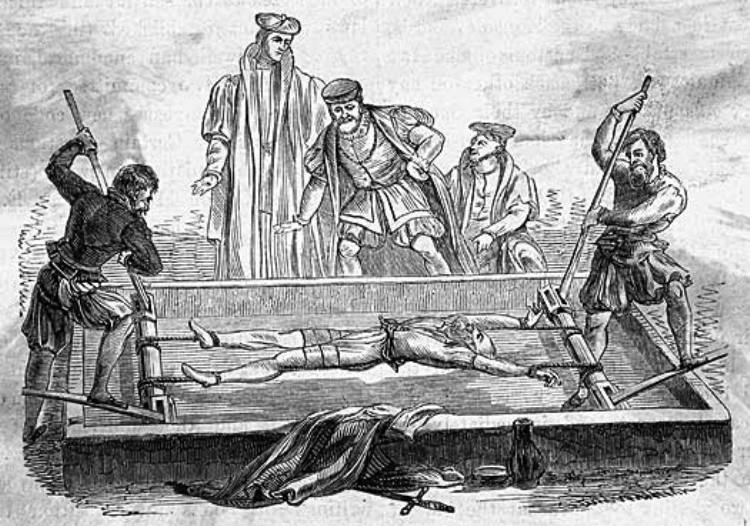 From crucifixion, to playing, boiled alive, or tortured by rats, we take a look at brutal ways of torture

There are modern ways of torture nowadays. One of the most famous is the way CIA tortures people using “sound disorientation”. They play loud music for sustained 24-hour periods to prisoners. Some of the songs include Baby One More time by Britney Spears, Kim by Eminem, Born in the USA by Bruce Springsteen, White America by Eminem, and more.
But over the course of history, societies and communities have had some brutal and harsh torture methods. Let’s take a look.

We have to start with one of the most famous torture methods in history. Jesus Christ’s crucifixion took place in Judea in the first century AD. Romans sentenced him for his alleged religious views.
But the practice was used in the ancient world before that, and after that up to the twentieth century. It involved being tied or nailed to a wooden bean, or cross. Nails were pierced through the bones below the wrists. This way, they bear the weight of the person.
No major blood vessels were hit, only the median nerve. This caused the fingers to seize and the hands to flex down.
Then, the feet were nailed to the vertical part of the cross, and once the legs weakened, the arms had to hold up the body. This resulted in shoulders being pulled from their sockets, followed by elbows and wrists, resulting eventually in suffocation.

This torture technique was quite popular during the age of sail. The goal was to punish sailors and criminals.
The victim was tied to a rope, and then thrown under the ship and fished out the other side. The person was dragged through the water under the keel of the ship. 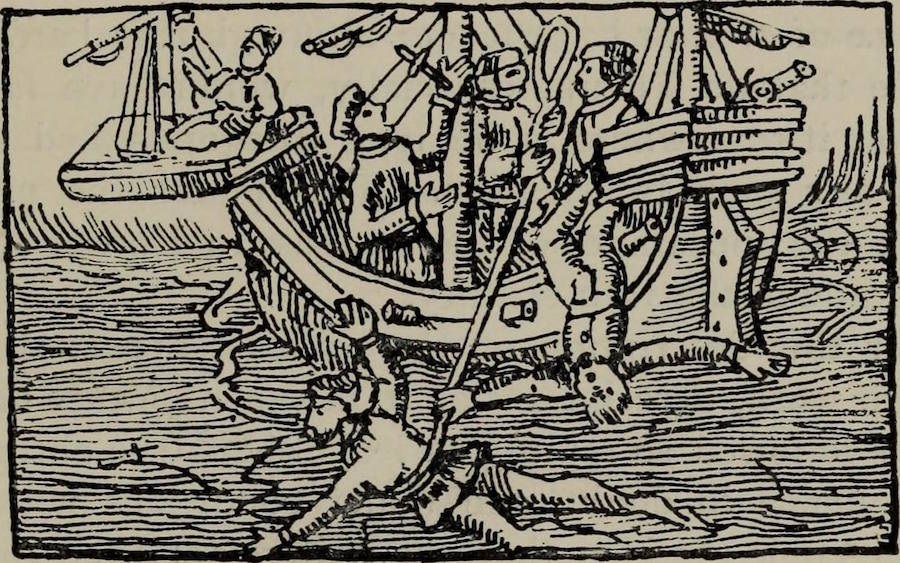 During the torture, a person could drown, succumb to trauma from hitting the side of the ship, or be shredded to death. In any case, there was no escaping.

The torture device or method was quite popular during the Spanish Inquisition and in the Middle Ages. It consisted of a collar outfitted with a double-pronged fork.
Because of the sharp ends of the tool, the wearer had to hold its head back to avoid getting stabbed. The design of the fork was not so that it kill people. But it would cause serious pain should the victim relaxed its head.

We saw this type of torture in an episode of Game of Thrones. And it remains one of the most brutal scenes in the show’s history. The goal was to place rats inside a small cage, positioned against the victim’s abdomen. Then, torturers would heat the cage from the outside, using a candle or flaming stick. This caused the rat to become agitated and crawl its way to escape. Sadly, the only way he could escape is through the soft surface, human skin.
The rat would eventually gnaw its way into the victim’s bowels, causing agony in the process. The technique was used for extracting information out of prisoners, as it added a psychological element to the torture.
It was heavily used during the Dutch revolt in the 17th century and in the 20th century by South American military dictatorships in Argentina, Uruguay, Chile, and Brazil.

You have probably seen this torture method in movies or television series. For example, it was featured in Braveheart movie.
The torture device involved a table, usually wooden, and axles and levers at both sides. They would lay down the victim, bounding their wrists and heels with leather straps and belts.
Torturers would slowly push the levers, causing the axle(s) to rotate and produce tension in the chains. The straps would dig into the skin and gradually stretch its body outwards. 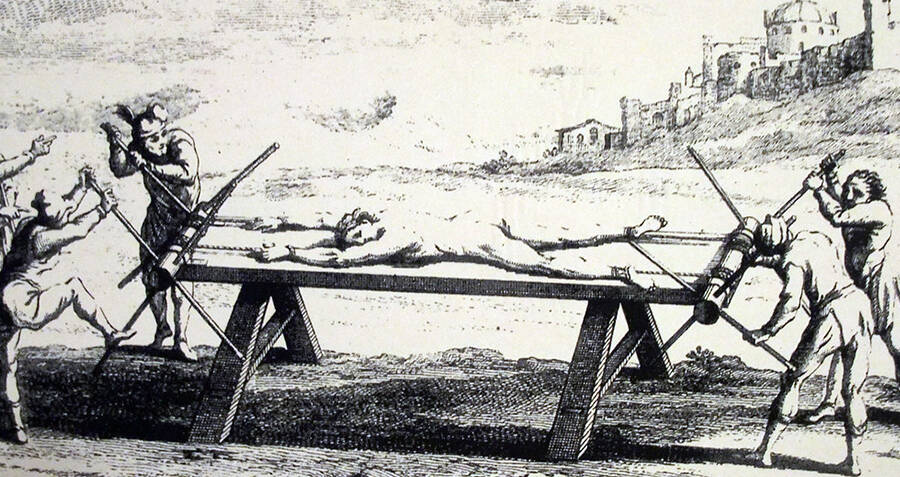 It is hard to explain the physical turmoil and damage. Joints, muscles, and tendons gave away, posture changed, and vertebrae expanded.

This infamous torture instrument came out of Medieval Europe. The name says everything you need to know about it. The device compressed the victim’s fingers or thumbs through the turning of a screw.
Immurement
This cruel practice was used by Mongols up until the 20th century. It wasn’t instant death. The person was allowed food and water. The punishment was reserved for the most extreme crimes or adultery.
The practice was carried out by looking the prisoner in some sort of coffin-like box. Sometimes, they were sealed into a wall or other structure.

The inspiration for this instrument came from priests sprinkling holy water on parishioners. Instead of tepid water, here, torturers filled the device with molten lead.
They would drip the liquid metal into the faces of the victim. Sometimes, it killed the victim in the process.

This torture method was brutal, but also gross. It was a slow and disgusting way to die. The victim was nailed between two boats or inside a box with the head, arms, and legs sticking out.
Torturers would then place the boats into a water source of left out to bake in the sun. They would then feed the victim milk and honey until they would vomit on themselves. Besides vomiting, the diet caused severe diarrhea as well. 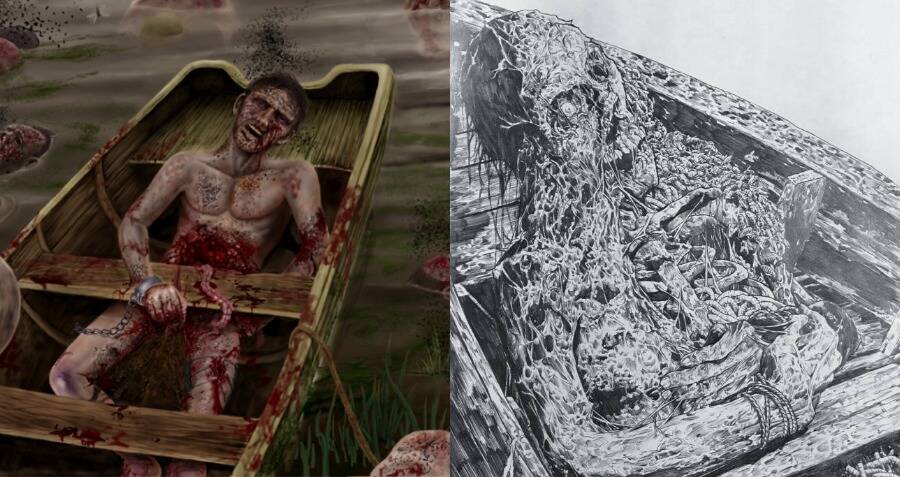 The mixture of bodily fluids and food would attract rats, insects, and more that would eat the victim alive over several days. Then, worms and maggots would spawn in the feces and crawl into the orifices and eat them from inside out.
The worst part was the victim couldn’t die of dehydration because of the forced feedings. It prolonged the suffering.

One of the nastiest torture devices came out of the Spanish Inquisition. It had four legs like a chair. But the difference was an added a pointed wooden pyramid instead of a comfortable seat.
Victims were position in a way they were over it. They were then lowered down with ropes or made to stay above it on their own. If they were standing on their own, torturers waited for the victims to grow exhausted and lower themselves down.
The result was inflicted excruciating wounds upon the sensitive area between the legs.

Centuries ago, boiling was a common method of execution used in East Asia. But it was also used in England. The victim was stripped and then placed in a vat or pot of boiling water, oil, or tar.
In some cases, the victim was placed in cool liquid, and then heated to boiling. During the reign of Henry VIII, some people were boiled for up to two hours before they passed away.

Flaying, or skinned alive is another torture method we saw in Game of Thrones. It was the signature method of House Bolton.
The painful method was used in the ancient world. The victim was stripped, with hands and feed bound to stop any movement. Then, executioners would peel away the skin with a sharp blade, starting with the head. This would cause severe pain as the victim was still conscious. 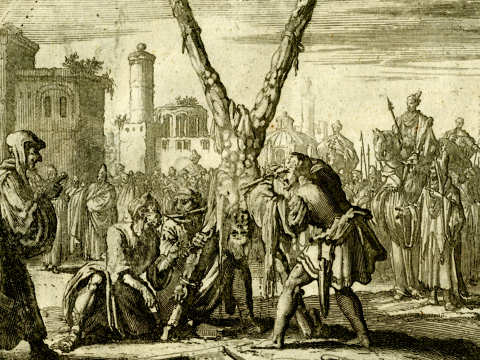 Sometimes, part of the bodies were boiled to make the skin softer and easier to remove. Assyrians, Aztecs, Chinese, and Medieval European people used this torture method.

We finish off the list with the most brutal example of torturing in the ancient world. The Roman ruler and emperor Nero was responsible for coming up with this one.
He hated Christians, so he used them as human candles for his parties. It is just one more example of how Christians were treated under Roman sovereignty.
The victims were tied and nailed to tall stakes. Then, they were poured with flammable liquid and then set alight. The first started at the feet so that it could prolong the suffering.

History
Weird History of Dog Poop – The Secret Ingredient in Victorian Leather
Back in Victorian Britain, there was a job title called “pure finder”. The name is ironic, since workers didn’t fi...
Opium Wars – How they Defined Relations Between China and Europe
The opium wars, fought between Britain and France, and China, were a period of humiliation for the Chinese. They resulte...
Erie Canal Facts – One of History’s Greatest Architectural Achievements
Why it is an architectural achievement? Well, the engineering demands of the canal included the removal of earth using a...
Ruins of Pompeii – Remembering the Great City
To this day, 22 of the original 66 hectares have not been unearthed. You can walk down the streets of the ancient Roman ...