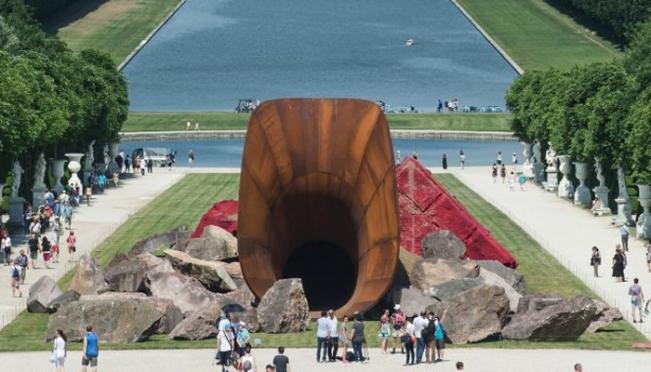 The description reads “the vagina of a queen who is taking power”. Apart from the controversial sculpture, Kapoor has also placed other objects on display in Versailles

Versailles opened its gates and grounds for art exhibitions in 2008. Since then, hundreds of artists have shown their work. Tourists coming to Paris and Versailles, normally expect classic French Art, but from the last two weeks, they are greeted with a statue that many have called it the biggest controversy of the French art in recent years. There are mixed reactions for the 60 meter long and 10 meter high sculpture that looks like a female genitals. The official name of the exhibition is “Dirty Corner”, and according to the artist, Anish Kapoor, the controversial sculpture represents “Her’s Vagina”. While the name doesn’t suggest so, it is believed that the unofficial name of the sculpture is actually “Queen’s Vagina”. And judging by the description of the artist, that is possible. The description reads “the vagina of a queen who is taking power”. Apart from the controversial sculpture, Kapoor has also placed other objects on display in Versailles.

Anish Kapoor is a 61 year old sculptor and artist, with British – Indian origins. He is a Turner Prize winning author, and he is the one behind “Cloud Gate”, Chicago’s iconic art piece. He is also the one responsible for “Descension” an installation, vortex of perpetually spinning black water in a gallery floor.

But it seems like his latest work, the exhibition “Dirty Corner” in Versailles, Paris, has made him as popular and as controversial as he has ever been.

His latest piece is a sculpture that many believe looks like female genitals. The artist explained the sculpture before it was placed as “a sculpture facing the castle, a mysterious sculpture of rusted steel that will be 10 meters high with stone blocks all around”. The sculpture, that has been called “Queen’s vagina” by press in France has attracted attention and controversy like rarely seen in France.

The description of the sculpture reads “the vagina of the queen taking power”, but is nowhere listed as the “Queen’s vagina”. Instead, Kapoor insists that he never publically linked the sculpture with any queen, former or recent.

Just several days after the sculpture was displayed in the gardens of Versailles, vandals had something to say about. Vandals have destroyed the sculpture, painting it with yellow spray all over it. The artist, 61 year old Kapoor has located the blame for the vandalizing act on the right-wing intolerance, stating that the sculpture “has given offense to certain people in the extreme right wing”. He also stated that the problem looks political to him and that vandalism is an act of intolerance and it shouldn’t be encouraged in a country like France.

- You have to put this in some perspective. If this act of vandalism says something, it speaks more to a certain intolerance in France than to art itself, The problem seems to me more political than anything else," the sculptor said in an interview following the vandals attack. He then took it to Twitter to express his opinion, saying that “When your inspiration has dried up: find a masterpiece, and parasitize it: it works”.

He also said that he loves France, but noticed that he noticed discomfort in the country. Kapoor has yet to decide whether to disassemble his sculpture, or leave it as it is. The initial plan was for the sculpture to be on display until November.

Officials in France have characterized the attack as “an attack on freedom of expression”. Officials from the Socialist party expressed their opinion that “art, the compass of freedom, suffers because of the obscurantism of some people,"

In the words of the artist

Probably the biggest controversy of the sculpture is the artist himself, who has tried several times to explain his work. And any work that requires further clarification and explaining, is dubbed for controversy. Following the vandalizing act, Kapoor has given this statement:

- I never used the words from which the controversy was born. I never said 'the queen,' I referred to 'her' or 'she' to describe a form that could be feminine, lying on the grass, like an Egyptian queen or a sphinx.

The artist believes that the name “queen’s vagina” is what caused the controversy, and by using the name, people belittled his work. He also said that he doesn’t seek provocation, nor that he wants to be associated with any form and shape of protest against contemporary art.

While many people from the feminist lobby has applauded the courage of the artist, there are also some who believe that the Queen’s vagina actually challenges feminism as it is. One author, Michele Hanson writes that “Artists have done vaginas to death. Oh dear. Is this how some men still see women? As dirty storage units? And I thought feminism had got somewhere. We still have a million miles to go."

For example, Leonardo is the author of “The Female Sexual Organs”. Other art pieces with vagina-like inspirations include “L’origine du Monde” by Gustave Coubert, “The Waterfall” and “the Illuminating Gas” by Marcel Duchamp, and a series of photographs by Henri Maccheroni, called “2000 photos of the sex of a woman.

Some contemporary artists also worked on the subject of female sex and female genitals. For example, Hannah Wilke did a number of works with the female vulva as an inspiration like her “Corcoran Art Gallery” in 1976. Other contemporary works include The Dinner Party in 1979 by Judy Chicago, Wall of Vagina byKembra Pfahler in 2011, “Cunt painting” by Betty Thompkins in 2011 and much more.