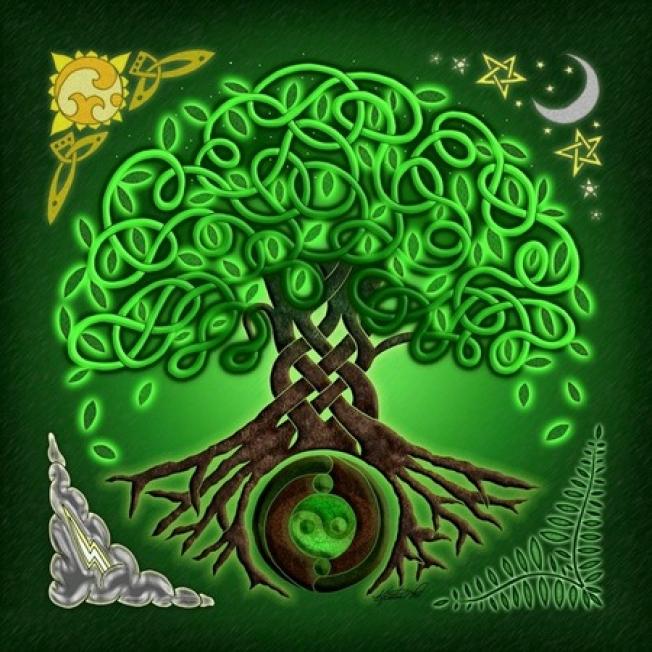 Celtic Mythology nowadays is mostly associated with the Irish and Ireland, who are believed to be descendants of the Celts

The Celtic World covered Central and Western Europe, but it was never unified in a single country or politically unified. As a result, there are many variations of Celtic symbols and meanings. However, there are some that are common for all variations. Celtic Mythology nowadays is mostly associated with the Irish and Ireland, who are believed to be descendants of the Celts. And while their mythology didn’t survive the Roman Empire, the Celts have left an impression that lasts and is still present. There are many symbols associated with the Celtic mythology, but we will try to explain the most popular and common ones.

- balance and harmony in nature

- rebirth, the tree sheds its leaves in the fall, then hibernates in the winter, and is reborn in spring with new leaves. The tree of life symbolizes the circle of life

Nowadays, the tree of life can be found in many decorations, but also in tapestries and tattoos. The tree of life has become a popular tattoo in recent years, even exceeding the popularity of tribals, dragons and other mythical figures.

For the Celts, the power of the Three played a large role in their beliefs. The Triquetra is a triangle, a symbol that refers to three cornered shapes. Nowadays, the triquetra is used exclusively for a complex form of three vesicae piscis. In some cases, there is a circle in or around the vesicae piscis. There are many meanings for the triquetra, including a harmony between: spirit, mind and body / father, son and holy ghost / mother, father and child / past, present and future / thought, feeling and emotion / the other world, the mortal world and the celestial world. The circle between the triquetra is a symbol for infinity and eternity. And while the symbol has had many uses in decorations, wallpapers, tapestries and tattoos, it became even more popular with the hit TV series “Charmed”. Another popular use of the triquetra is in jewellery and in the music business, where many music bands use the symbol on CD covers.

In Celtic Mythology, and in Ireland nowadays, most things come in three. The power of the three is very popular theory between Irish people. The triple spiral is an ancient symbol that appears in various forms and shapes in art. The spiral is more popular between the female population, due to its symbolism. It is believed that the spiral represents the three powers of the maiden, the mother and the crone. The Triple Spiral is a symbol of female power, and shows the transition and growth of the bearer.

The Celtic Cross differentiates from other cross in its design. Unlike other crosses, the Celtic Cross combined the cross with a ring that surrounds. It is also a sign of Christianity, but it has older origins. As with many symbols in Ireland and Celts, it is believed that the Celtic Cross was introduced by Saint Patrick. Nowadays, the Celtic Cross is used both in religious, but also in secular context. Appearing on T-shirts, coffee cups, public monuments, retail souvenirs, jewellery and tattoos, the Celtic Cross represents the bridge and the passage between heaven and earth. The circle, or the ring in the middle, is a symbol for infinity and eternal spiritual love.

In latest years, the Celtic Cross has become a symbol for White nationalists. The Cross has been used by both individuals and organizations for displaying white pride, white supremacy, and white nationalism. In Nazi Germany, the Cross was banned because it was used in a context of racism. The Cross was also popular during the Neo-Nazism era. The Celtic Cross is also banned from use in Italy, for similar reasons, but there are some examples when the sign is used for religious purposes by the Roman Catholic Church.

As in many other religious and mythologies, the bull is a symbol of strength, power and wealth. But the Celts, and especially their druid rituals, used the bull in sacrificial rituals. The bull has a different significance for the Celts, as it is used both for religious rituals, but also as a symbol for wealth, status, virility and fertility. However, one symbolic meaning that is underrated and often forgotten, is that the bull represented stubbornness in the Celtic world. Nowadays, the Celtic bull is used for two purposes: the first one is to display power, strength, status and wealth, while the second is for newlyweds, during their efforts to conceive a child. The Bull was considered a symbol of fertility and showed the power to procreate and extend the life of the clan.

The Shamrock is arguably the most popular and widely used Celtic symbol. It is the most famous symbol of the country of Ireland, and the Irish are considered descents of the Celts. The Shamrock is also associated with St. Patrick, who used the sign to preach Christianity and the concept of trinity: The Holy Father, Son and the Holy Ghost. Therefore, the Shamrock had a deep religious meaning for the Celts. Nowadays, however, it is more famous due to the belief that four leafed shamrock or clover brings luck. It is mostly used as a pendant for bringing good luck and warding off the bad and evil. The Shamrock is also a popular symbol during St. Patrick’s Day, when Irish and other wear fresh shamrocks on their coat lapels to honor the saint.

Cermunnos is the most famous and popular Celtic god, also known as the Horned one due to the horns on his head. The Celts invoked Cernunnos on wedding nights, since the God was a sign for sexuality and fecundity. He is also the God of the animal realm, and was called for success in hunting. Cernunnos is portrayed with horns, snakes and torc, with every element having its own symbolism and meaning. Nowadays, Cernunnos is mostly used as a sign of masculinity. Males use Cernunnos and his horns as tattoos, as a sign on their helmets (especially popular between the motorcycle communities). Horns are symbol of male power, and the bigger the horns, the bigger the mojo of the bearer/wearer. Another popular use of Cernunnos and his horns is visible between athletes. Cernunnos was famous for his physical and athletic skills, so he is an important figure in the fitness world. People who want to show an impression as the fittest, bravest and strongest between the pack use Cernunnos.

Epona was the mother horse goddess for the Celts, and was called upon during equinoxes in order to bring smooth passage of the season. She was honoured as she helped Celts to cope better with transitions. The Celts also called upon Epona during times of crisis and flux in their life. She served as guardian of new life, and can nowadays be seen as a decoration in nursery rooms, as she takes care for newborn babies. Also, Epona is a character in one of the most popular video games, the Legend of Zelda. Epona is the name of the princess, but it is unknown whether the creator of the game took a page out of Celtic mythology for the character.