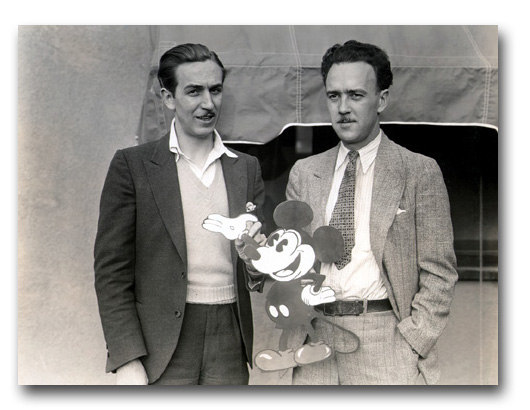 When the term Mickey Mouse is brought up, people think of Walt Disney at first. But rarely someone thinks of Ub Iwerks, the man who animated the Mickey cartoons

People make mistake in life all the time. Sometimes, one wrong decision can lead to a life without the proper recognition. Such is the case with Ub Iwerks, the man who started head to head with Walt Disney as the creators of the most popular cartoon character in the history, Mickey Mouse. Iwerks and Disney worked previously on another popular cartoon character, Oswald the Lucky Rabbit. Disney’s budget at Universal studios was cut down, so Walt leaved the studio, and together with Iwerks, created the new popular icon, Mickey. Iwerks was responsible for the design of the character, while Disney came up with the personality, mannerisms, and the voice of Mickey.

And then the wrong decision came, as Iwerks left Disney in 1930 to work on his own studio. After five years, the studio fall apart, and in 1940, Iwerks came back to Disney. The decision to leave Disney cost him a lot, as Iwerks sold his 30% share of the actions, and when he came back, even though he was chief of special effects and contributed greatly to the success of the company, Iwerks is often overlooked. Here are some of his successes.

As mentioned, Iwerks and Walt Disney created Mickey Mouse together, but it was Iwerks who was responsible for the animation of the first Mickey Cartoon, called “Plane Crazy”. Iwerks animated the whole cartoon in secrecy, as the studio was still working on the last shorts of Oswald. Iwerks had to place dummy drawings on Oswald on top of Mickey so that nobody would find out he was working on another project. Iwerks stayed late every day to finish Mickey, with some people saying he made between 600 drawings at night.

Ub made the first Multiplane camera

While Iwerks was working in his own studio he developed the first multiplane camera, something that Disney has not yet achieved. Ub used the camera for his Valiant Tailor cartoon. Sadly, as with some other achievements, the “Tailor” was not as successful, and when Disney used the multiplane camera for his own cartoons, some people thought that was the first time the camera has been used in the animated cartoons industry.

Disney used his multiplane camera for the production of the mega popular cartoon, “Snow White and the Seven Dwarfs”. Disney completed his camera in 1937, two years after Iwerks has used it in the Valiant Tailor. The last cartoon movie that Disney used the camera for was “The Little Mermaid”. Before the camera was invented, animators could not create a successful tracking shot. The traditional methods for animation were costly, time consuming, ineffective and unpractical. What the multiplane camera did was give a sense of three dimensional depth in an animated cartoon movie.

Iwerks was highly successful with inventions and mechanics, and some legends say that he once dismantled his own card and then reassembled it in one weekend. For the multiplane camera, Ub used car parts and scrap metal and used it first in 1935.

The man Behind Disney Movies

When he returned in 1940 to Disney studio, Iwerks was put in charge for special visual effects. And he delivered, inventing the live-action techniques for animation that Disney used in some of the most popular cartoon movies. Iwerks made animation loose, appealing, fun and organic, something that many other animators tried to follow. Simply put, the “Disney style”, the style you expect from a Disney movie would never be possible without Ub Iwerks. Some of the animators that followed his style and were influenced by Iwerks include Norm Ferguson, Fred Moore, Hugh Harman, Rudolph Ising, Steve Bosustow, Osama Tezuka, and Milt Kahl.

Pat Powers, the Man who broke the bond

Walt Disney and Ub Iwerks were two of the best friends, not only colleagues. They worked tirelessly on Oswald, but as with every relationship, it only takes one man to break the bond. In this case, that man was Pat Powers, a businessman who negotiated a deal with Disney Brothers Production. The deal asked Powers to pay $2,500 per Mickey Mouse cartoon, and then receive 10% of the gross earnings.

However, he didn’t pay the full price, and because of the lack of commitment, Walt Disney was frustrated, and Ub’s work would suffer. However, from a today’s sense of view, one might say that Powers and Iwerks had a plan all along. The two had a secret plan for opening their own production, or the one in which Ub would be in charge. Disney and Powers confronted in 1930 over money, and then Iwerks and Powers created their own studio.

The studio had some medium success, with the two most successful characters Flip the Frog and Willie Whopper. However, the studio was closed in 1936, and Iwerks will eternally be remembered as the man behind the Mickey Mouse cartoon. Over the course of his career, Iwerks produced more than 300 movies.

After his studio failed, Iwerks returned to Disney where he was placed in charge of developing special visual effects. The sad part is Iwerks was the one introducing the first Color-Sound cartoon, Flip the Frog. He did it in his own studio, but had he done it in Disney, he might have been more popular nowadays and more people would know his work. However, chances are more people remember him for the work on Mickey Mouse.

Religion
5 Things you Didn't Know About Thor
This is one of the 5 things you didn’t know about Thor, one of the most popular characters in the history and beliefs ...
Meet Betty Cohen – The Woman who made the 90’s Awesome
Betty Cohen founded Cartoon Network in 1992, and she brought some of our favorite cartoons to life
Benjamin Franklin the Inventor
Between running a print shop, starting the first lending library in America, engineering the postal system, and helping ...
Seven People who should have won Nobel Peace Prize, but didn't
Chemistry, Physiology, Literature, Physics, and Peace are the five Nobel, but the Peace is the most coveted, the most si...