Weird statues of the world: Belle in Amsterdam 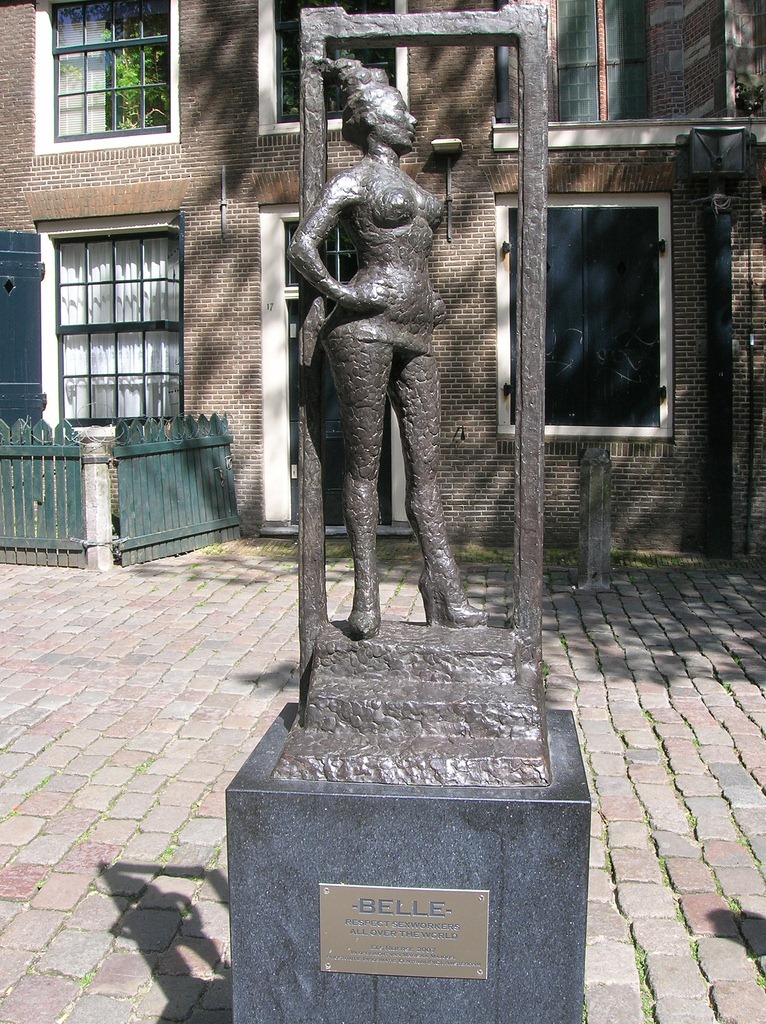 The Belle statue honors all sex workers around the world. The plaque reads “Respect sex workers all over the world”. Belle is made of bronze. She is fortified with steel, a move made to prevent vandalism

There are many weird statutes around the world. Some of them are weird because of the form and shape of the statue. Some because of what they symbolize. Belle in Amsterdam is certainly among the weirdest statues in the world.

What is the statue?

The statute is titled “Belle”. She was placed on Oudekerksplein, a square in the heart of the Red Light District. The statue was placed there in 2007, and was part of a project by the Prostitute Information Centre in Amsterdam. Mariska Majoor was the woman responsible for creating the sculpture, and Els Rijerse was the artist that crafted the sculpture.

Mariska is a former sex worker, and she founded the Centre in Amsterdam in 1994. Her goal is to educate the public on sex work, and reduce the stigma that sex workers are facing on a daily basis. The organization does this by running tours of the Red Light District for students and tourists. The centre is focusing on improving the rights of sex workers, but also as providing place for sex workers to seek advice or help. 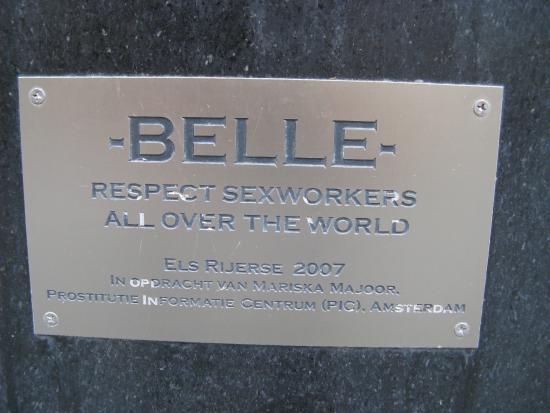 The Belle statue honors all sex workers around the world. The plaque reads “Respect sex workers all over the world”. Belle is made of bronze. She is fortified with steel, a move made by the centre to prevent vandalism.

Irony at its finest

You might say that the Belle statue symbolizes irony at its finest. For starters, the statute is set at the Oudekerksplein, which translates to Old Church’s Square. The square is located in the center of Amsterdam, and it is named after a 14th-century church. The church dominates the square, and we all know what are the Church’s views on sex and prostitution.

The square was originally a graveyard, and in 1655, the graveyard was cleared and moved to a new location. The new location was beyond the city limits, and by doing so, the city created the square.

However, the Oudekerksplein is at the very heart of the red-light district of De Wallen. There are between 30 and 40 windows along the square. Behind these windows, you can spot prostitutes offering their services for sex.

The city is trying to reduce the number of prostitutes on the Oudekerksplein. Project 1012, which was first presented in 2007, has a goal of removing windows from the square. The city’s government wants to replace the brothels and windows with restaurants, artist’s workshops, shops, and much more. In addition to removing brothels, the city’s government also wants to remove the coffeeshop on Oudekerksplein.

- The district works from noon until long after midnight. During those times, girls stand behind red-lit glass doors dressed in fancy underwear

- It is forbidden to take pictures, and prostitutes will verbally abuse you if they spot a camera. Sometimes, they might throw your camera in a canal

- Some prostitutes have blue lights instead of red, indicating they are not born as women. Some of the prostitutes are transgenders and travestites

- There are at least 1,000 prostitutes on any given day. Some of them work on the windows, some in clubs and escort services

- Prostitution is legal in Amsterdam, and prostitutes and brothels pay taxes. Prostitutes in Amsterdam even have a union. They must be 18 years old at least, and if a younger girl is detected by the police, she might be taken to the station. Clients must be at least 16 years old

- Sex starts at 50 euros for 15-20 minutes of oral sex and intercourse. Condoms are very much required. Just one of those pleasure costs 30 euros. For anything more, like extra pleasure or extra minutes, you pay extra. Fun fact: most prostitutes refuse to kiss, as they believe that is too intimate

- The daily rent for a window is 85 euros during the day shift, and 115 euros for the night ship. Small landlords own most of the windows.

Germany is one out of nine European countries that have legalized prostitution. It is legal and regulated in Germany, as well in the Netherlands, Austria, Switzerland, Greece, Hung...

12:51
Sexuality
Abuse Documentary: The Shame of the Catholic Church

Sexual abuse in the Catholic Church has been making headlines for years. Some priests have been punished, but what about the bishops who shielded them?This documentary takes a look...

Activism
National Grange – Secret Society Going Public
In 1867, Oliver Hudson Kelley organized the National Grange following order given by President Andrew Johnson. He visite...
The Kinsey Scale – What is it, and How to Use it?
It is one of the oldest and most-widely used scales to describe sexual orientation. While it is outdated, the scale was ...
7 Migrants that Changed the World
At the peak of the European migrant crisis in 2015, more than 1 million Syrians requested asylum in Europe
Stonewall Riots – The Protest that Inspired Modern Pride Parades
They might not have initiated the gay rights movement, but they served as the catalyst for a new generation of political...