The Knotted Gun – Symbol of Peace and Hope 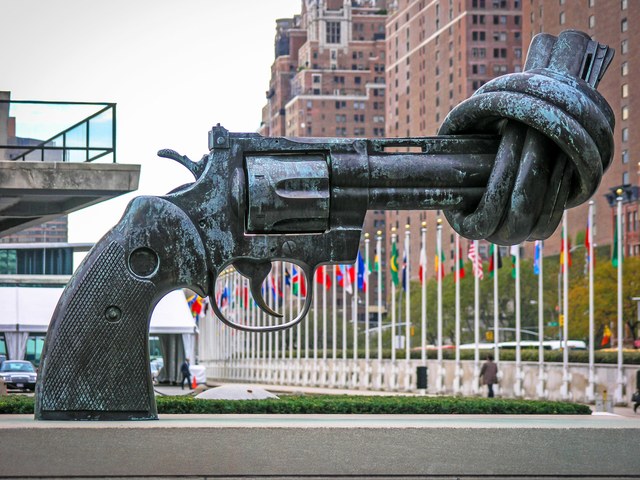 The Knotted Gun, or famously known as the “Non Violence Sculpture” is a bronze sculpture made by Swedish artist Carl Fredrik Reutersward. The sculpture is an oversized Colt Python .357 magnum revolver with a knotted barrel and the muzzle pointing upwards.

He made the sculpture after John Lennon was murdered in 1980, and since then, the sculpture has become an icon for the Non Violence project.

The sculpture was donated by the Government of Luxembourg to the United Nations in 1988. There are more than 30 copies of the sculpture around the world, ten of which are in Sweden, and one is in Beijing. The sculpture in the United Nations is the original one. There is also a sculpture at the European Commission in Kirchberg, as well as in Berlin at the Federal Chancellery, in Lausanne at the Olympic Museum and in many other cities and countries.

The museum of Sketches in Lund, Sweden, has a sketch of the firearm on which Carl Fredrik Reutersward noted that his grief for Lennon inspired him to design the sculpture.

The Symbolism of the sculpture

In 1988, the Government of Luxembourg donated the bronze sculpture to the United Nations, and it was placed outside the headquarters in New York. At the time, Kofi Annan served as the UN Secretary General. He said:

“The sculpture Non-Violence has not only endowed the United Nations with a cherished work of art; it has enriched the consciousness of humanity with a powerful symbol that encapsulates, in a few simple curves, the greatest prayer of man; that which asks not for victory, but for peace.”

Carl Fredrik lived in Lausanne, Switzerland for many years. His works have been exhibited around the world. The artist was wheelchair-bound after a stroke in 1989. He died in 2016.

The knotted gun serves as the basis of the Non Violence foundation and project. The non-profit foundation has a mission to inspire, motivate, and engage young people in understanding how to solve conflicts without resorting to violence.

The project also follows John Lennon’s vision for world at peace, using the lyrics of his famous song, “Imagine”, as part of their motto. The lyrics of the song are the following:

“Imagine all the people living life in peace You may say that I’m a dreamer But I am not the only one I hope someday you’ll join us And the world will live as one.”

The project was founded in 1993, few years after the knotted gun sculpture made its way to the United Nations. Since then, the foundation has received several awards in more than 20 years of educational outreach. They have trained more than 6 million people, who are now their activists.

- Initially, the sculpture was not placed at the UN. It was first placed in Central Park, New York, in the Strawberry Fields memorial

- Carl Fredrik Reutersward, had the idea of the sculpture after his close friend and activist, John Lennon, was shot in 1980. Lennon’s wife, Yoko Ono, asked the sculptor to commemorate Lennon.

- At time of the donation, Kofi Annan was the Secretary-General of the United Natons

- In 2011, on the anniversary of the death of John Lennon, fellow musician Ringo Starr urged musicians to join the Non Violence Project by using an adapted version of the sculpture.