Tana Toraja, Indonesia - A lesser known place to add to your bucket list 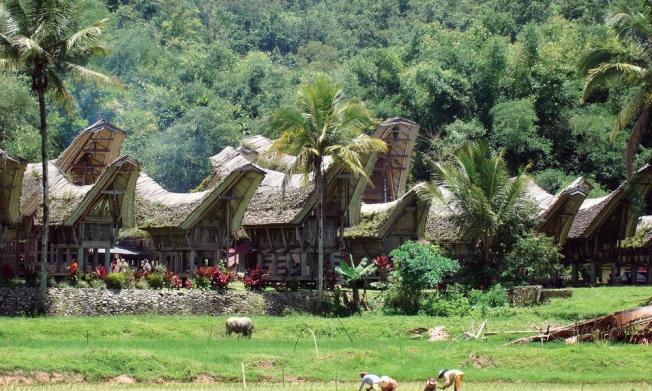 Not many people know about Tana Toraja in Indonesia. When most people think of Indonesia, the first thing that comes to mind is Bali. And while Bali is the most popular touristic destination in Indonesia, Tana Toraja is the second. What is interesting though, is that the concept of tourism is completely different. Bali is a more romantic place with beautiful beaches and sand, while Tana Toraja is a mythical and mysterious place. Life is slow in the area known for the rice terraces and boat shaped roofs.

The population of Tana Toraja is around 650,000, most of which, around 450,000 still live in the regency of Toraja, or as it is known between locals, the Land of Toraja. Most citizens are of Christian beliefs, but there are also Muslims and locals who still believe in the old ways, known as Aluk Todolo or the “Way of the Ancestors”. In Toraja, life revolves around death. The place is known as the city of the Walking dead, a name that the area has earned due to its specific burial rituals. And for those rituals, it is worth visiting Toraja.

According to local beliefs, everyone who dies can be turned into a zombie. There are people in the villages that “have” the ability to make dead people walk. And this is a literal premise. There are two theories how this is achieved, and we will delve into both.

According to the first theory, in the past, there was a belief that all dead people must be buried in their village of origin. Since villages are very far apart, and most villages are isolated, it was extremely useful if dead people could walk. The belief is that there were, and still are people who can make dead people walk, and they can get to the village of their origin, no matter if they passed away in a distant village. In those ancient days, it was common to see corpses, zombies and dead people walking around. At least, that is what the theory suggests.

The second theory is also tied with the belief of the villagers, but about death itself. According to the locals, death is not something that happens overnight. Quite the contrary, locals believe death is a long and exhausting process, and it takes years for the deceased to reach afterlife. Therefore, the funeral must be executed in a certain way, with rituals that help the deceased to make the transition as smooth as possible. The arrangements are costly and expensive, and in a case that a family cannot afford the arrangements, they can always use a temporary coffin until they find funds for the real one. Once the coffin is ready, the dead are raised and made to walk into the coffin.

Speaking of the burial rituals, we must explain how the process takes place. During their life, villagers of Tana Toraja work extremely hard to save money and accumulate wealth so they can use it to pay for the burial process and ritual. The extravagance of the funeral is considered a prestigious event in the village of Tana Toraja. The more extravagant the funeral is, the bigger the status of the family. The funeral ceremony can be held weeks, months or sometimes even years after a death of a person.

When a person of Tana Toraja passes away, the family holds several ceremonies over days. During the burial ceremonies, the deceased is not buried into the coffin, but instead, he is embalmed and kept in a traditional house with his family. As creepy as it sounds, the dead live in a same house as the living. Until the ceremonies are over, the dead cannot be placed into his coffin, and he is not considered dead. Family members and friends refer to him/her as a person suffering from illness, or asleep. Sometimes, the ceremonies can last for years, depending how long the family needs to raise the money for the ceremony.

The burial ceremony stars with visitors attending a buffalo-slaughtering field. Locals believe the spirit of the deceased will live peaceful afterlife if they slaughter pigs and buffaloes, herding the deceased animals. Following the sacrifice, the meat is distributed to the visitors according to their position in the community. The spirit of the dead person is also entitled to a portion of meat, in what locals call Aluk Todolo. And while the meat of the buffaloes is consumed, their heads are returned to a sacred place known as puya.

The body of the deceased is not buried until 11 days have passed since the beginning of the ceremony. Afterwards, the body is “placed” into a coffin and the coffin goes to a cave up on the cliff of the village.

We mentioned that citizens of Tana Toraja believe in the afterlife, and they make a ceremony out of it. The ceremony is held in August, and it is called Ma’Nene, which means “Ceremony of cleaning corpses” on local languages. Bodies of deceased people are washed and exhumed, groomed, and then dressed into new clothes. The “mummies”, “zombies” or whatever you want to call them are then walked around the village.

The deceased follow straight lines that take them to Hyang, a spiritual entity.

Tana Toraja is part of the UNESCO heritage, as the organization believes that the village has an “indispensable scientific value as a source of analogy to study the past” and “the cultural landscape created based on local wisdoms may bring awareness on the nature-culture relation”. The rituals of Tana Toraja are believed to be as old as 700 years and they are still a living culture. UNESCO is trying to preserve the tradition as the organization believes that “such complicated and expensive ceremonies sustain many aspects of prehistoric megalithic culture which cannot be found in any other part of the world today.”

For those who want to visit Tana Toraja, there are some useful tips you should know beforehand.

- Visitors are expected to dress according to local customs and bring a present when they enter a house in Tana Toraja. The present which is a token, is usually coffee or cigarettes.

- The best way to move through villages is by walk or use the local transport called “Bemo”. There are jeeps and minibuses you can rent as well.

- Tongkonan is the name for the traditional house of a Torajan. When entering the house, beware of your head as the passageways are extremely low.

- Do not expect restaurants in the tourist sites. While there are restaurants along the road, it is best to bring your own food for lunch, snacks and everything else. Travel guides usually take the group to a restaurant though.