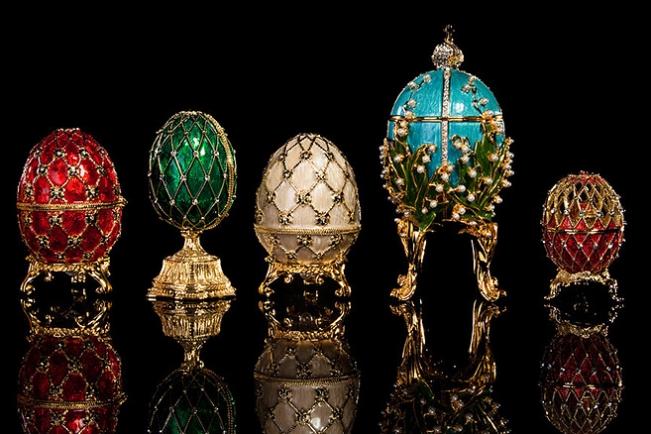 In the 19th Century, Easter was one of the most important dates in the Orthodox Christian Calendar. To celebrate Easter, tsar Alexander III started a tradition that turned into one of the most precious and luxurious collections in the world. He ordered an Easter surprise from Carl Peter Faberge for his wife. The surprise was a golden egg. Once the tsarina received the gift, she was so impressed, that Alexander III decided to order an egg with a surprise for every next Easter. And that is how the Faberge eggs were crafted. There were 54 eggs crafted in total, each unique and special in its own way. Of those 54, seven are considered lost as their trace is lost. Most of the eggs are still in Russia.

Made under the supervision of Peter Carl Faberge in 1899, this egg is one of the largest Faberge eggs in history. It was made for Tsar Nicholas II, who gave the egg as an Easter gift to his wife, Alexandra Fyodorovna. At the moment, the egg is safely kept in the Kremlin Armoury Museum in Moscow. The Bouquet of Lilies Clock Egg is one of the rare and few that never left Russia.

The egg shaped clock has a rectangular pedestal design, and the egg is decorated with translucent enamel. The clock’s body is divided into 12 different parts, all of which are outlined with diamond stripes. Everything about this egg is covered with diamonds, including the belt of the dial. Enameled with 12 Roman Numerals in diamonds, the hours on the clock are indicated by a diamond clock. The base of the egg is decorated with rosettes. On the base, the date of the manufacture is set in diamonds. The Madonna lilies serve as the crown of the clock and they are carved from onyx. All the flowers on the egg are carefully placed, and they symbolize purity and innocence (lilies), and eternal love (roses).

The surprise in the egg was a miniature gold bust. The egg is just two of the lost eggs for which there is a photograph and one of the seven Imperial eggs that are missing.

Another egg made as a commemorate for Alexander III of Russia. It was an Easter Egg, jeweled under the supervision of Carl Faberge in 1902. Nicholas II was the recipient of the egg, and he later presented it to his mother, the Dowager Empress named Maria Feodorovna.

The egg was made from nephrite, one of the two mineral species that derivate from jade. Nephrite is the more common jade, and it usually comes in gray and green color, and occasionally in brown, white or yellow. Nephrite is an ornamental stone. The Empire Nephrite egg was manufactured in Empire Style. According to rumors and reports, the egg had a golden base. The decoration of the egg was in diamonds and there was a medallion portrait of Alexander. The Empire Nephrite egg is lost, and there are no photographs and images that can prove the authenticity of the egg.

This is the first of 54 jeweled eggs that Peter Carl Faberge made for the Russian Imperial Family. Tsar Alexander III ordered the egg in 1885 for his wife. The egg is also known as the Jeweled Hen Egg and started a long tradition that lasted for years. Impressed by the egg, the tsar ordered a new for the tsarina every Easter the following years. This egg is part of the Vekselberg Collection and is safely kept in the Faberge Museum in Saint Petersburg.

Fun fact is that Faberge did not make this egg. Instead, one of his workers was responsible for the craftsmanship. Erik Kollin is the name of the crafter who made the egg completely of gold coating with opaque white enamel in order for the egg to look like a real egg. There is a thin band of gold at the spot where the two halves of the egg shell are joined.

Once the two halves are open, they reveal a gold yolk made with a matte finish. The surprise contains a gold hen with ruby eyes. There were two additional surprises hidden into the hen, but they are currently missing.

The Mauve egg contains one of the best and most personal surprises from all 54 Faberge eggs made for the Imperial Family. The surprise is a heart shaped photo frame and contains three miniature portraits of Alexandra Fyodorovna, the then tsar Nicholas II and their first child, Olga Nikolaevna. The miniature portraits are made out of rose-cut diamonds, with green, strawberry red and white enamel. The portraits also contained pearls.

The Mauve was made for Nicholas in 1898. He presented the egg to his mother. The cost of the egg is believed to was 3,250 rubles back in the day. The Mauve is one of the seven lost eggs.

The Royal Danish is another lost egg, one of the two of the lost eggs for which there is a photograph. It is one of the largest eggs made by Peter Carl Faberge. The height of the egg is 229mm, at the top of which there is a crown with the Order of the Elephant, the symbol of ancient Denmark.

The egg was made for Empress Maria Feodorovna, who was born in Denmark. She returned in 1903 to Denmark for the 40th anniversary of the accession to the throne of her father. She ordered the egg as a gift for her father and a commemoration of the event.

The surprise in the egg is a miniature portrait of Christian IX of Denmark and his wife.

Also known as the Angel with Egg in Chariot, this egg was crafted in 1888 to Alexander III of Russia. There are little known details linked with this egg, as it is one of the seven lost imperial eggs. Even the design is unsure, as there is just one single photograph of the eggs, and even on that photo, the Cherub is hidden behind another eggs. The best information about the egg is the description in the Historical Archives, in which the egg is described as "Angel pulling chariot with egg – 1500 roubles , angel with a clock in a gold egg 600 roubles. Many believe the description actually means that the clock is inside the egg. The official description by Faberge also points to a cherub pulling a chariot.

The egg was presented to Maria Feodorovna in 1888 and was later sent to the Armory Palace of the Kremin in 1917. In 1922, the Cherub with Chariot egg was transferred to Sovnarkom, and that is where the trace is lost.