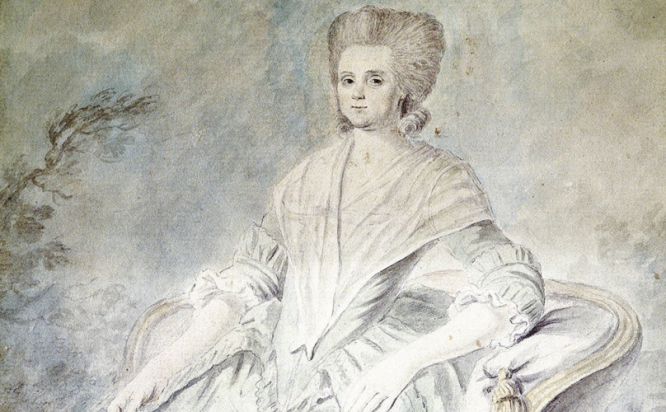 She established a series of documents acknowledging women and their equal liberties. Marie wrote a personal letter to the queen at the time, Marie Antoinette, stating what womanhood mean to her. Her legacy is unquestionable in the history of women rights

Olympe de Gouges is a revolutionary for women’s rights in the French Revolution. She is one of the most popular and recognizable women in the Enlightenment era. She and other women paved the way for natural rights and equality for women in society.

She established a series of documents acknowledging women and their equal liberties. Marie wrote a personal letter to the queen at the time, Marie Antoinette, stating what womanhood mean to her. Her legacy is unquestionable in the history of women rights.

Born into a petit bourgeois family in 1748 in southwestern France, Marie believed she was the illegitimate daughter of Jean-Jacques Lefranc, Marquis de Pompignan. Her mother afforded her a bourgeois education.

At the age of 16, she got married against her will to Louis Aubry, a caterer. In her semi-autobiography novel, she writes “I was married to a man I did not love and who was neither rich nor well-born. I was sacrificed for no reason that could make up for the repugnance I felt for this man”. Luckily, her husband died a year later, and then in 1770 she moved to Paris with her son.

There, she lived with her sister and never married again. Olympe called the institution of marriage “the tomb of trust and love”. While she never married again, she did date other men. In Paris she dated the wealthy Jacques Bietrix de Rozieres, but refused his proposal. The two remained close during the French Revolution.

With his help, she established a theatre company. She often attended the artistic and philosophical salons in Paris where she met writers and future politicians.

In 1788, Marie published Réflexions sur les hommes nègres, a work that demanded compassion for the plight of slaves in the French colonies. Marie said there is a direct link between the autocratic monarchy in France and the institution of slavery. She argued men everywhere are equal. And later in her life, that same concept guided her to women’s rights.

Gouges came to the public’s attention with her play L'Esclavage des Noirs. With the play, she further expanded on her stance against slavery in the French colonies. That made her a target of threats. Many also believed a woman’s proper place is not in the theatre.

As a passionate advocate of human rights, Marie greeted the outbreak of the Revolution with hope and joy. However, she soon became disenchanted when equal rights was not extended to women. In 1791, she joined the Society of the Friends of Truth, or the Social Club. Their goal was to demand equal political and legal rights for women.

Her declaration called for an extension of the rights demanded in the Declaration of Man to women. Besides the freedom of speech and right to vote, Marie asked for the opportunity to seek public office.

She dedicated her work to Queen Marie Antoinette. Gouges hoped the Queen would support women’s rights.

The declaration consists of a preamble, 17 articles, and an epilogue. She used provocative words and encouraged women to take action.

Essentially, the Declaration stated that women were equal to men in every respect and thus they were entitled to the same rights.

Marie Olympe is famous for her plays and letters. Following the French revolution, she wrote a number of letters and pamphlets. In her early letters, she made a point of being a woman and spoke as a woman. She often addressed her public letters to people having the power to make a difference, like the Queen Marie Antoinette.

In the letters, Olympe spoke from her experience. She tried to articulate the values of the Enlightenment and comment on how France can put it into practice. Gouges spoke of civic virtue, universal rights, political rights, and natural rights.

She signed her pamphlets with citoyenne. She adopted this style from Rousseau’s letters to the citizens and republic of Geneva.

As the politics of post-revolutionary France progressed, Olympe failed to become an actor on the political stage. Yet, her letters offered advice to the political establishment. Here is what she wrote to Marie Antoinette.

“I could never convince myself that a princess, raised in the midst of grandeur, had all the vices of baseness... Madame, may a nobler function characterize you, excite your ambition, and fix your attention. Only one whom chance had elevated to an eminent position can assume the task of lending weight to the progress of the Rights of Woman and of hastening its success. If you were less well informed, Madame, I might fear that your individual interests would outweigh those of your sex. You love glory; think, Madame, the greatest crimes immortalize one as much as the greatest virtues, but what a different fame in the annals of history! The one is ceaselessly taken as an example, and the other is eternally the execration of the human race."

At the time, public letters and pamphlets were the primary means for the working class and women writers to engage in the public debate. These letters were used to stir up public anger. They circulated within and outside France.

In November 1788, Marie published her first political brochure, a manifesto entitled Letter to the People, or Project for a Patriotic Fund. In it, and following works, she set up her proposal for social security, care for the elderly, institutions for homeless children, and the introduction of a jury system