Karl Bushby and the Goliath Expedition 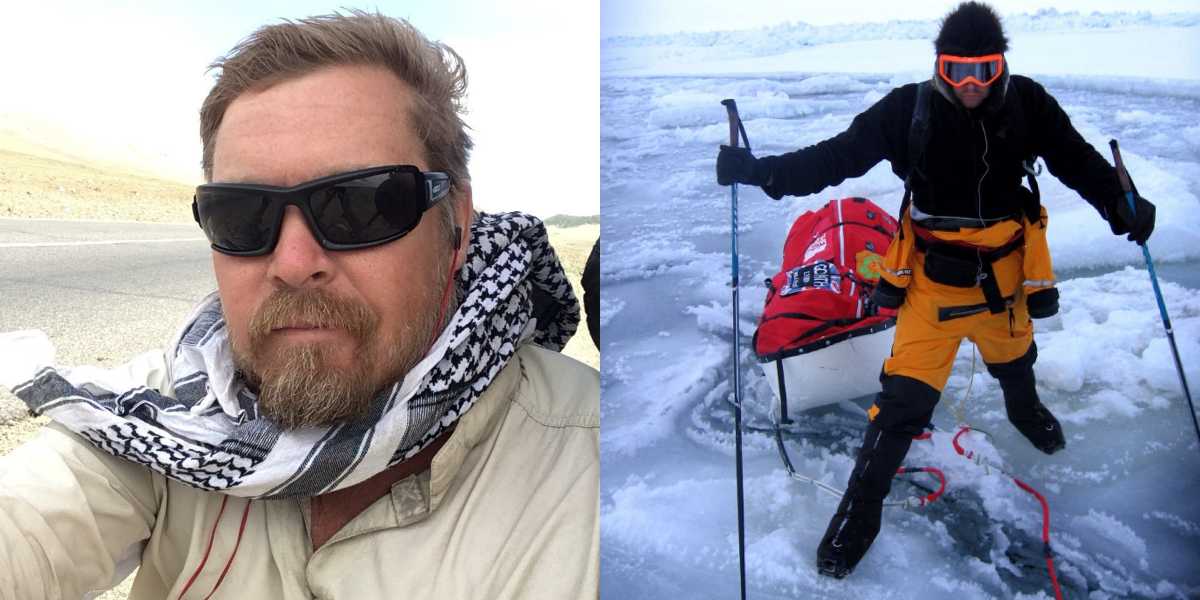 Karl began his journey on 1 November 1998, and originally expected to finish the 36,000 miles journey trek in eight years. But numerous displays have ensured he has not completed it yet

Who is Karl Bushby? Well, he is famously the man who decided to walk around the world. Born in March 1969 in Hull, England, he is a British ex-paratrooper, walking adventurer, and author. He is attempting to be the first person to completely walk an unbroken path around the world, known as his Goliath Expedition.
Karl began his journey on 1 November 1998, and originally expected to finish the 36,000 miles journey trek in eight years. But numerous displays have ensured he has not completed it yet.
What is his latest challenge? When he might finish the expedition? Let’s talk.

When Karl began planning the trip, he divided the route into eight stages, phases, and last legs. He planned to acquire food and basic supplies en route through town and villages. He carried all of his belongings in a wheeled carriage, named The Beast.
He has encountered every environment and condition the planet has to offer, but there were three main gaps that required special attention.

The first gap was the Darien Gap, a large underdeveloped swampland and pristine jungle environment, forming the border between Columbia and Panama. This area is known for the challenge it presents, as well as the significance in the drug wars of Columbia.
The second gap is the Bering Strait, the crux of the expedition. It is a life-threatening and significant challenge. To accomplish his ultimate goal, the modern explorer did something nobody did before, and that is cross a semi-frozen sea of churning ice and water. He walked and swam across the Bering Strait from the US to Russia.
And the third gap is the English Channel, 21 miles separating Great Britain from the rest of Europe. Legally, the tunnels are not available as a public thoroughfare. Karl hopes that with 21 miles from home, authorities will allow him to walk through once he gets to that pount.

The objective is the dream of Karl, forging a path of unbroken footsteps from the southern tip of South America back to England without using any form of transport. The idea began in the late 1990s, and he hasn’t completed it yet.
The Goliath Expedition is like no other in history. It is unique in its approach, but also in the way it is supported. Karl began it in 1998 in the Chilean town of Punta Arenas, then walking northwards through South America, Central, and North America, before crossing from Alaska into Siberia.

The home base provides administration and support from the United Kingdom, but in their spare time. Home base has full time jobs, but manage to keep Karl upright and moving forward. Most expeditions like this one would not even think of setting off without sponsorship, funding, and support.
But Karl set off with just $800.

What inspired Karl to start his journey? In one blog posts, he says, “As paratroopers we lived on our feet, everything we did was on foot. It was about going the distance, being self-sufficient and always pushing boundaries of physical endurance”.
So, for him, it was natural that the journey was seen through that lens. It is hard, but in the end it is a real challenge.
People have done this on motorbikes or bike. Cyclists have gone from Alaska to Ushuaia in 9 months. But it takes a lot longer on foot.
Karl says, “You are very much in the thick of it, much more so than zipping by on a bike. Stand filthy in mud, bleeding from thorns, savaged by insects and burned by the sun, the smells and the visions will never leave you”.

How does a typical day look?

People following his expedition always wonder how a typical day looks. And he says, “A typical day – wake up, eat, pack, walk, pitch, eat and sleep, repeat. It’s mostly a dull routine. You slip into a more natural lifestyle, wake when the sun comes up, sleep when it goes down”. 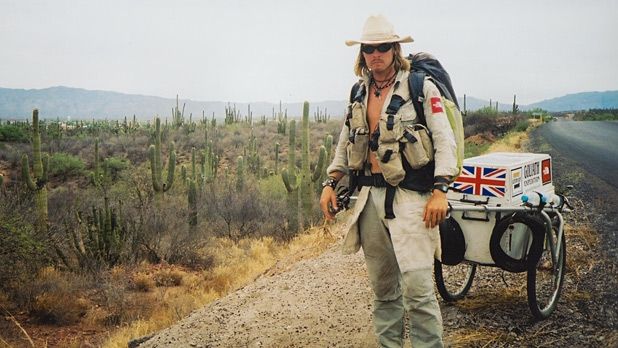 Karl also explains there is a reason midnight is called Mid … night. It depends on your environment, and it is very different in the Arctic. There, midwinter, things are very challenging with limited daylight (almost 3hrs) to almost 24hrs of daylight in late spring.
Karl says that for the most part, he tries to get the walking in the light hours. That means he has between 7 and 8 hours on the road with one hour of lunch rest. His idea is to be off the road and pitched before sundown.
He has slept everywhere humanly imaginable, in almost every condition and environment.
His goal has always been, and will probably remain to walk around 20 miles per day. For equipment, it depends on the environment and season. That can vary dramatically, but he tends to travel with everything he needs for winter and summer.
He carries 4 season tens and 4 season sleeping bags.

Over the years, Karl has seen many obstacles, challenges, and delays. When he began the journey back in November 1998, he had two rules. Walk an unbroken path, meaning using no form of transport to advance, and that he couldn’t go home to Hull, England, until he arrived on foot. 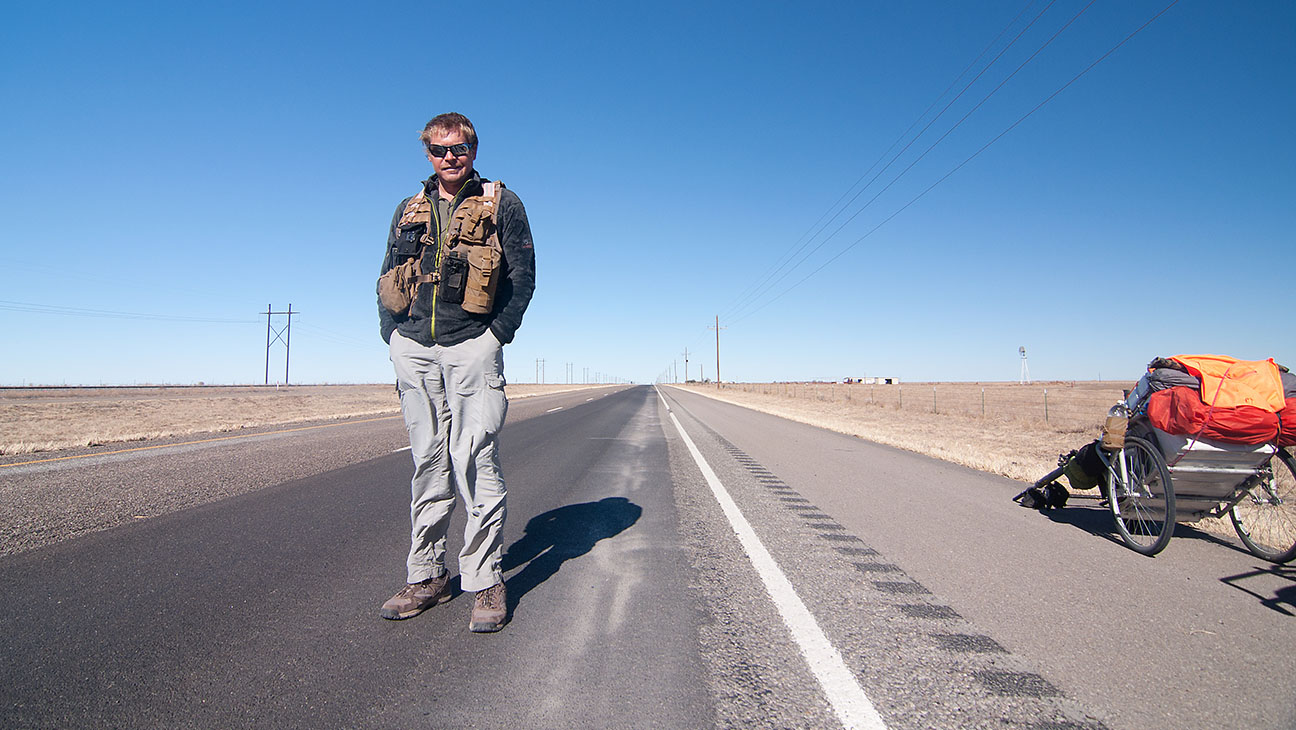 He made this pact with himself more than two decades ago, and he is still walking. Hoping to become the first person to complete an unbroken round-the-world walk has been a challenge.
In the past few years, he has seen delays like Covid restrictions, political situation between Iran and the US, and the war in Ukraine.
The last one is his biggest delay and challenge. For the past few years, he has been living in Mexico. He says, "I have got to start moving again. It’s the most difficult position I have been in on this expedition. It feels like I am treading a wall of friction between the West and the East. I have to find a way through”.
Because the war in Ukraine, Russia is off limits for his journey. The only viable option at the moment involves swimming 160 miles across the Caspian Sea, from Kazakhstan to Azerbaijan. And he looks to do it in the summer of 2023. He will spend the time until then to get into the right condition.
From Azerbaijan, he is into Georgia, and at that point, he is on the home straight. Karl says several years ago he was young and he could easily swim that much.
But now, he is 53, and swimming more than 150 miles, across the Caspian Sea, is going to take a lot of stamina.

Personal Triumphs
George Bissell – The Father of American Oil Industry
George recognized that rock oil, a liquid that oozed from rocks, could actually be used as an illuminant. He and his bus...
March on Rome – How Mussolini Helped Hitler
100 years later, and we can argue that without the March on Rome, Hitler’s rise to power might never have happened. We...
Justinian I – Who was the Man we Thank for Today’s Laws?
Justinian I tasked himself with collecting and codifying existing laws and legal works from the Roman world, and ordered...
Mikhail Gorbachev – Achievements and Failures
Mikhail Gorbachev was the last Soviet Leader. He passed away on August 30, 2022, in Moscow, Russia. In 1990, he won the ...