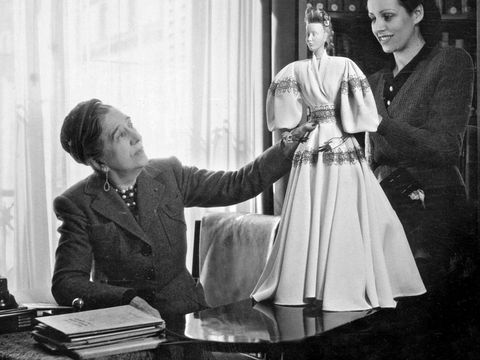 Her calling card was her robe de style dress. This gown hung straight and narrow on the torso, but then ballooned out widely at the hips

Jeanne-Marie Lanvin was a French haute couture fashion designer. She founded the Lanvin fashion house, the oldest house in France. Along with Gabriel Chanel, Madeline Vionnet, Elsa Schiaparelli, she is one of the most influential women in French fashion. She managed to propel French fashion into the international spotlight, at a time men dominated the industry.

The 1930s saw a female designers make their mark. Unlike her rivals, Jeanne was not so much a public face. She avoided the public. And she might not have had an iconic claim to fame. But she is definitely one of the women that changed women fashion.

Boorn in Paris in 1867, Jeanne started her fashion career at the young age of 13. She began working for a milliner, and eventually became his apprentice. Jeanne opened her first boutique when she was 22 years old.

Her world changed when she got her daughter in 1897. Marguerite “Marie-Blanche” di Pietro became her muse. Jeanne began designing clothes for her child, always thinking her daughter should wear the most beautiful clothes possible.

The child’s outfit and appearance caught the attention and adoration of others. In 1908, Lanvin launched her children wear line. Orders for children’s clothing began to exceed those for hats. So Jeanne believed it was time to expand her company. In 1909, she opened a Young Ladies and Women department. This way, mothers and daughters could come and shop together. The line included day clothes, evening dresses, coats, and lingerie.

The same year, Lanvin became a member of the Chambre Syndicale de la Couture, or the Parisian Fashion Council. This changed her status from milliner to designer.

Her calling card was her robe de style dress. This gown hung straight and narrow on the torso, but then ballooned out widely at the hips. This was similar to silhouettes from the 18th century. Each dress was enriched with beading or embroidery, and they were a whimsical contrast to the minimalistic sporty looks of her contemporaries.

When she joined the Parisian Fashion Council, her clothes attracted the attention of wealthy people. They asked for copies of the clothes her daughter wore for their own children.

As a visionary, she constantly expanded her business. In 1913, she realized the success of the fashion house is more than the creations. So, she opened a Furs department. Jeanne offered a never-before-seen service to the clients. She allowed them to keep their furs in reserve for the summer.

By the 1920s, her stores had departments for home décor, menswear, lingerie, furs, and more in addition to children and women wear.

But the most significant expansion came in 1924. She introduced her signature fragrance, Arpege, inspired by the sound of her daughter practicing her scales on the piano.

Each dress Jeanne designed is breathtakingly beautiful. They showcase her eye for detail, exceptional taste and sense of proportion and color. In 1925, she showcased her dresses at the International Exposition of Modern Industrial and Decorative Arts. All the dresses stood the test of time. You can wear them today.

In the 1930s, she changed her style. She went for clean and minimalistic look. During this period, she showcased her passion for sleeves and sculptural cuts. For example, her legendary My Fair Lady dress made from bias cuts of white organza with an enormous black bow.

Each piece of her 1920s and 1930s dresses stood the test of time. This is what makes the House so great. You can show each dress on today’s runways.

Her clothes were about perfection. Jeanne chose the fabrics, and then developed her own color schemes. Lanvin even built a dye factory to achieve the subtle inimitable shades she wanted. The famous designer used pieces of mica, coral, gold, silver threads, ribbons, and more along side of pearls and sequins. This way, the beading would match the fabric and motif.

The Logo of Lanvin

The House’s original logo was a mother and a child twirling around. This is essential to how Jeanne began her career and business. Everything started with her daughter.

Unlike her rivals, she did not design for slim women. She always stick to her bouffant style for women with a larger size. Her signature piece is the robe de style bouffant dress.

Jeanne always worked with expensive fabrics. This is what made her garments easily recognizable.

Business
Jesse Livermore – The Pioneer of Stock Trading
At the peak of his fortune, Jesse had a net worth of $100 million. That was back in 1929. In today’s money, that would...
Karoshi – Death by Overworking
The term first appeared in the early 1970s. The origin of the term can be found in the word “kacho-byo”, which trans...
How Rich You Need to Be to Be Considered Wealthy?
According to a poll, Americans say you need an annual income of about $100,000 to be considered rich. In the poll, Ameri...
What is the G20 Summit?
The G20 is an acronym that stands for a group of 20. The G20 is a group of 19 countries plus the European Union, trying ...