Get to Know the Tamil People 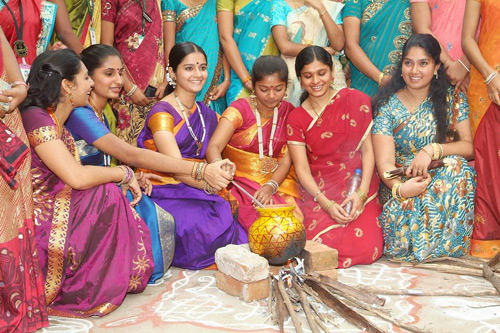 The Tamil people, also known as Tamilar, are a Dravidian ethno-linguistic group tracing its ancestry mainly to India’s southern state of Tamil Nadu. They constitute 5.9% of the population in India, 15% of the population in Sri Lanka, 6% in Mauritius, 5% in Singapore, and 7% in Malaysia.
They were noted for their influence on regional trade throughout the Indian Ocean. Artefacts marking the presence of Roman traders demonstrate that the Tamils had a direct trade between Southern India and Ancient Rome.
Most of them are Hindus, but they follow a particular way of religious practice considered to be the Ancient Tamil religion. A small number of them are Christians and Muslims.
English historian Michael Wood called them the last surviving classical civilization on Earth. They have managed to preserve the substantial elements of their past despite the influence of globalization.

Considered to be one of the world’s longest-surviving classical languages, the history of Tamil language dates back to 600 BCE. The literature is dominated by poetry, especially Sangam literature. It was composed of poems composed between 300 BCE and 300 CE. 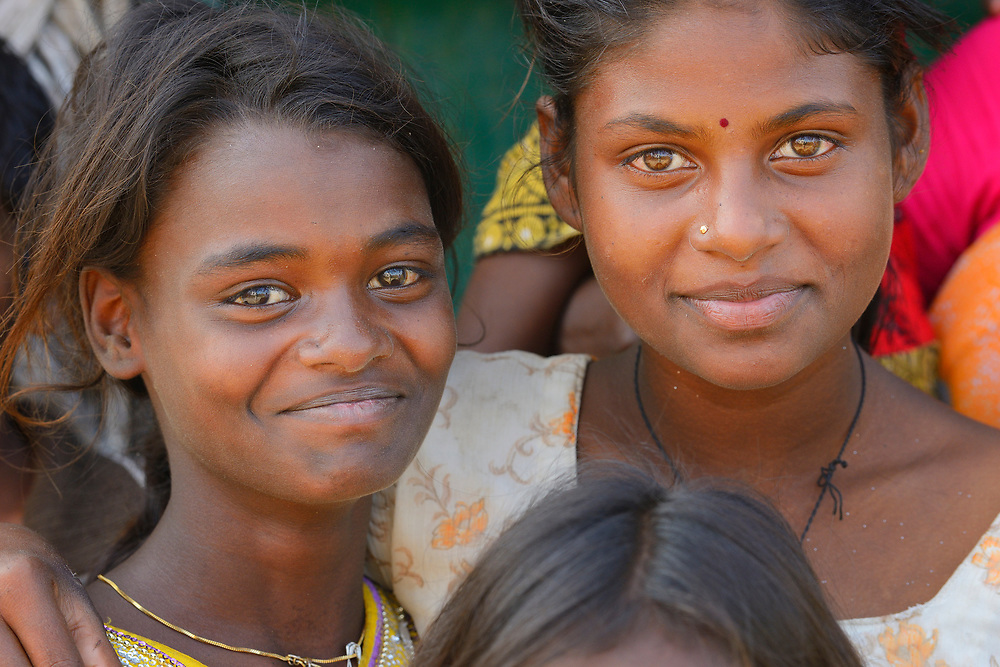 To this day, the most important author, poet, and philosopher remains Thiruvalluvar. He wrote the Tirukkural, a group of treaties on ethics, love, morality, and politics. It is widely considered the greatest work of Tamil literature.
Tamils have strong attachment to their language. It has historically been, and to large extent still is, central to the Tamil identity. It is a Dravidian language, with little relation to the Indo-European languages of northern India.
It has been far less influenced by Sanskrit compared to other Dravidian languages. The Tamil language managed to preserve many features of Proto-Dravidian. Yet, modern spoken language freely uses loanwords from Sanskrit and English.

Tamils around the world

As we said before, Tamils live mostly in two countries, India and Sri Lanka.
Most Indian Tamils live in the state of Tamil Nadu, including the major part of the former Madras Presidency. The state was given its present borders in 1956. The name Tamil Nadu was made official in 1968.
They are in clear majority in the union territory of Pondicherry, a former French colony. Yet, there are Tamil communities in other parts of India as well. 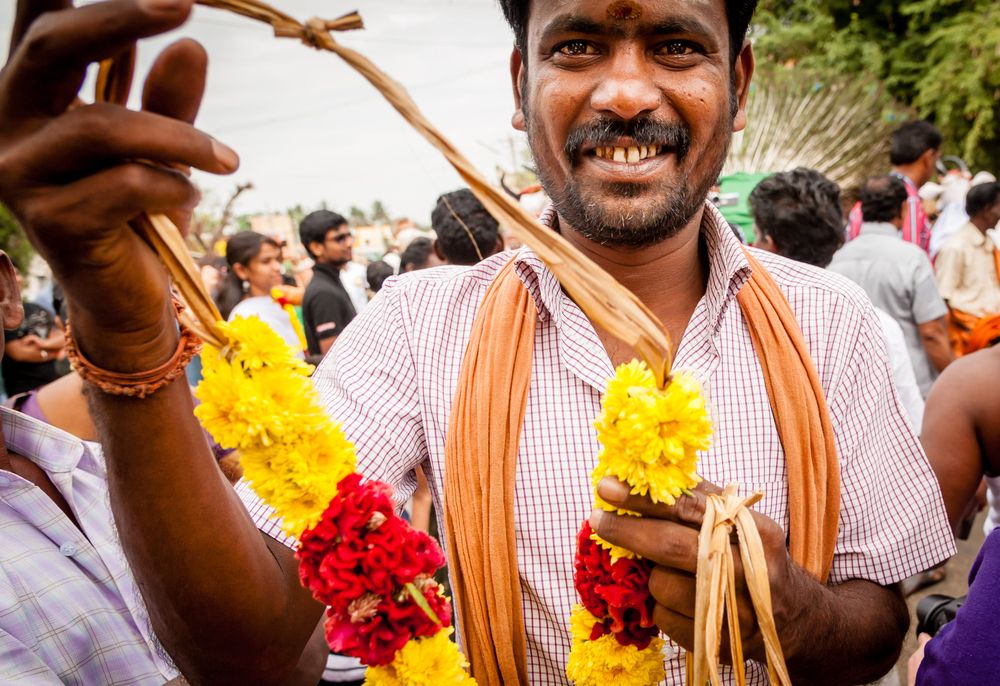 In Sri Lanka, there are two groups of Tamils. The first are the Sri Lankan Tamils, descendants of the Tamils who lived in the old Jaffna kingdom, and the second is Indian origin Tamils or Hill Country Tamils, descendants of bonded laborers sent from Tamil Nadu to Sri Lanka in the 19th century. They were sent there to work in tea plantations.
Under an agreement between the governments of Sri Lanka and India, in the 1960s, around 40% of hill-country Tamils were granted Sri Lankan nationality. Many of the remainder were repatriated to India.
Tamil emigration began in the 18th country, when poor Tamils were sent as bonded laborers to far-off parts of the British Empire. Those countries include Mauritius, Malaya, South Africa, Fiji, and the Caribbean. There were also families emigrating to other parts of the British Empire like Burma and East Africa. Many still live in these countries. As we saw before, there are a large number of Tamil people in Singapore and Malaysia.
In the 1980s, Tamils in Sri Lanka sought to escape the ethnic conflict and moved to Australia, North America, and Toronto, Canada.

Traditional Tamil art takes a religious form usually centering on Hinduism. Tanjore painting represents the most important part of Tamil painting. In that form, the artist paints the image, using dyes, on cloth coated with zinc oxide, and then decorates the painting with semi-precious stones, silver, and gold thread.
The sculpture ranges from elegant stone sculptures found in temples, to bronze icons with exquisite details. The Medieval Chola bronzes are some of India’s greatest contributions to world art. A fun fact: unlike Western art, the material in Tamil sculpture dos not influence the form taken by the sculpture. Instead, the artist imposes his/her vision of the form on the material.
Tamil temples host high spires known as Gopura, which consist of a number of stepped levels, and the vimanam, which rises above the sanctum sanctorum.

As we said before, most of the Tamil people are Hindus. In fact, 90% of the population of Tamil Nada declare themselves as Hindu. Christians and Muslims have 5% each. Most of the Christians belong to the Roman Catholic Church. 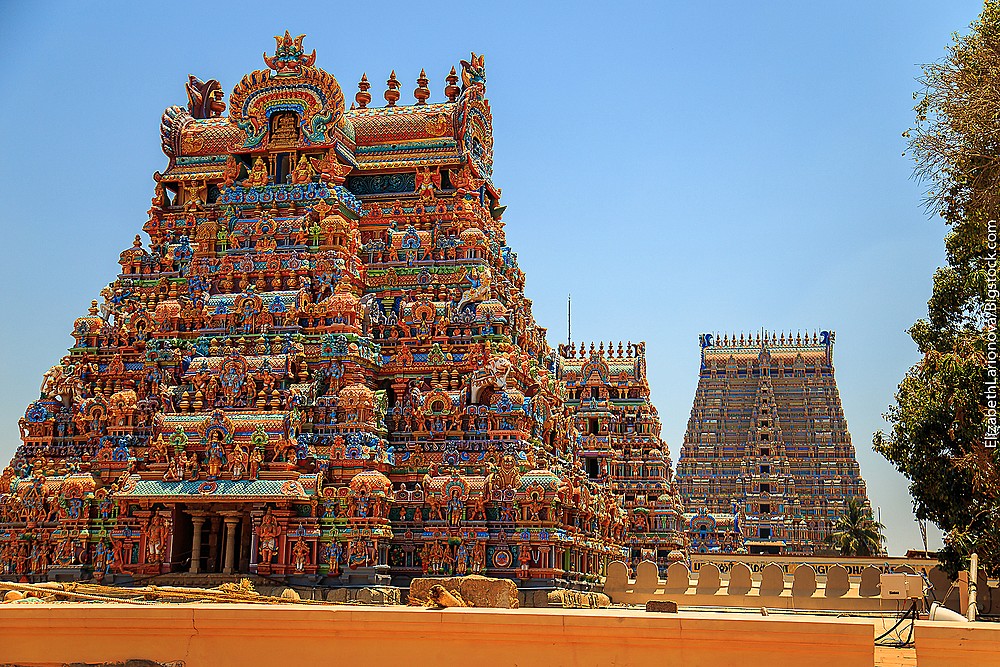 As for Muslims, one third of them speak Urdu and two-thirds speak Tamil.
In rural Tamil Nadu, villagers worship the spirits of local heroes whom they believe protect the village from harm.
Cuisine
Similar to the Tamil language, Tamil cuisine represents one of the oldest vegetarian culinary heritages in the world.
Rice is the major staple food in most of Tamil, usually served steamed with two of the six accompanying items, including sambar, dry curry, rasam, kootu, curd, or whey or buttermilk.
Each geographical area developed its own distinct variant of the common dishes plus a few dishes distinctly native to itself.

Cross-cousin marriages are common among Tamil people. Households are often linked by marriage within caste to a network of kin alliances. The preferred marriage for a male is to his mother’s brother’s daughter or to a lesser extent, his father’s sister’s daughter. It is not uncommon in southern India for a young man to marry his sister’s daughter. Anthropologists describe the marriage system as an exchange of women among families with political and economic implications.
Marriages among Tamil people have traditionally been arranged by elders, like uncles and aunts. Girls are regarded as marriageable following their first menstruation. Yet, nowadays, women wait until much later to get married.
The wedding ceremony is performed by a Brahman priest or a caste priest at the home of the bride. The bride’s family pays for most expenses of the wedding. They are expected to provide a dowry, whose value depends on the educational level and wealth of the family.
Most Tamils live in an extended nuclear families with five or six members. Sometimes, there are joint family houses that preserve land or business ties.
Women are expected to return to the home of her parents to give birth, especially in the case of the first child. They then stay there for a few months to receive advise and training on raising the baby.