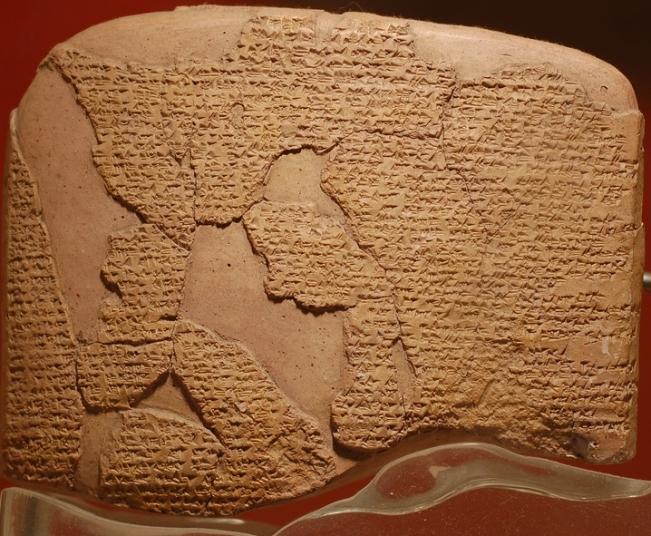 A bronze replica of the treaty can be seen in the United Nations building in New York, reflecting the milestone document. It is considered one of the prime examples in diplomatic history

More than three thousand years ago, Ramses II, the Egyptian pharaoh, and the Emperor Hattusilis III concluded one of the oldest peace treaties in the history of the world. The peace treaty ended the Egyptian Hittite war that lasted more than 80 years. The two ancient superpowers finally ended the war with the treaty in 1276 BC. While the treaty was not the first in the history of the world, it is the oldest known that was concluded between two independent states with equal power and status. A bronze replica of the treaty can be seen in the United Nations building in New York, reflecting the milestone document. It is considered one of the prime examples in diplomatic history.

The Battle for Syria

The Egyptian Hittite Treaty ended the long war between the two empires. In the center of the war was the land that both the Egyptians and the Hittite wanted to rule. The land is nowadays known as Syria, and the war shows the geopolitical value of the country even three centuries ago. For more than two centuries, the empires fought for supremacy over Syria. However, the conflict culminated with the Egyptian invasion on Syria in 1274 BC.

The Reason for War

The battle and conflict between the Hittite and the Egyptian empire lasted for two centuries before even Ramses II become a pharaoh. However, the conflict escalated in the fifth year of the young pharaoh’s reign. Ramses II wanted to take control of the city of Kadesh, located near the Orontes River. It was strategic target for Ramses, as Kadesh was an important stop for all trade routes in the region. The city was under control of the Hittite Empire, and Ramses II was afraid that by holding the city, the Hittite present a threat to his empire. The Hittite Empire was growing in power, and had already replaced Babylonia as a kingdom. The Battle of Kadesh is the last direct and official military confrontation between the two empires. After the battle, which was considered a draw for both sides, since both suffered enormous amount of casualties, the two sides started negotiating. The conflict lasted for 15 more years, and the period is nowadays considered as “cold war between the Hittite and the Egyptian empire”.

The Battle of Kadesh

Ramses II attacked the city with four divisions and used his resources to brag that he achieved victory in the battle. However, the Hittite King at the time gathered troops from his allies and was able to withstand ground. Ramses II made a crucial mistake, outdistancing his troops, after hearing reports that Hittite forces were far behind. However, the Hittite army, hidden behind the town, managed to launch a surprise attack and destroy one of Ramses strongest divisions. Ramses rallied his troops, and with the help from the Amurru troops he managed to rally. The next day, Ramses failed to gain ground, and he headed back to Egypt, bragging about his individual achievement. Back in the time, the battle was considered won by the Egyptian empire, but Ramses lost the war. Nowadays, the battle is considered a draw in which both sides sustained heavy losses.

The treaty was ratified in Year 21 of Ramses II ruling, and therefore, the Egyptian version starts with the words “Year 21, first month of the second season, twenty-first day, under the majesty of the King of Upper and Lower Egypt: Usermare-Setepnere, Son of Re: Ramses-Meriamon, given life, forever and ever, beloved of Amon-Re-Harakhte, Ptah-South-of-His-Wall, lord of "Life-of-the-Two-Lands," Mut, mistress of Ishru, and Khonsu-Neferhotep; shining upon the Horus-throne of the living, like his father, Harakhte, forever and ever”.

The next paragraph shows how Ramses II pleased everyone with the signing of the treaty, stating “On this day, lo, his majesty was at the city (called): "House-of-Ramses-Meriamon," performing the pleasing ceremonies of his father, Amon-Re-Harakhte-Atum, lord of the Two Lands of Heliopolis; Amon of Ramses-Meriamon, Ptah of Ramses-Meriamon, "/// great in strength, son of Mut," according as they gave to him eternity in jubilees, everlastingness in peaceful years, all lands, and all countries being prostrate beneath his sandals forever. There came the king's messenger, the deputy and butler, together with the king's messenger[bringing to the king] Ramses of [Kheta, Ter]teseb and the [second messenger (?)] of Kheta [bearing (?) a silver tablet] which the great chief of the Kheta, Khetasar (xtAsrA) [caused] to be brought to Pharaoh, L. P. H., to crave peace [fro]m [the majesty] of the King of Upper and Lower Egypt, Ramses II, given life, forever and ever, like his father, Re, every day. “

Key Points from the Treaty

The treaty itself contains more than 20 principles and obligations for both sides. However, some of the key points are the following.

While the treaty has huge historic value, there are many interesting facts that make the treaty special.

- The treaty is often referred as the Treaty of Kadesh. However, the word Kadesh and the battle of Kadesh is never mentioned in the treaty. One assumption for the reference is that the battle was the turning point after which the parties started negotiating

- The two emperors, Ramses II and Hattusilis III never met in person. The whole treaty was negotiated between intermediaries

- The negotiations started after the battle of Kadesh, but the conflict lasted for 15 more years. The treaty was finally ratified by both sides in 1258 BC.