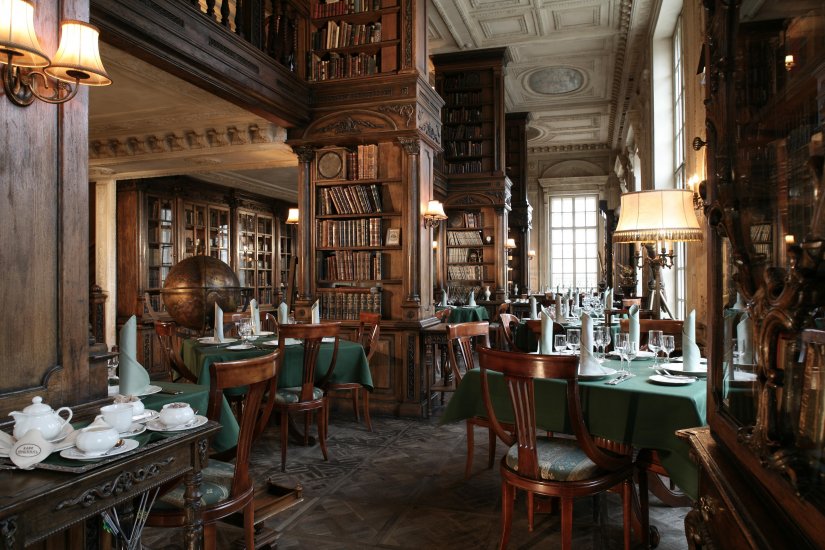 The café is the home for those who want to extend their nightly experience, but also for the morning people

Long ago, Café Pushkin, located conveniently close to Pushkin square was the place where the famous writer was drinking his morning espresso. Nowadays, the café is a modern, 24 hours restaurant with modern, yet authentic Russian cuisine.

The café is the home for those who want to extend their nightly experience, but also for the morning people. Usually, when the night is done and you are ready to tuck in with a warm blanket over you, you head home. But for some people, heading to Café Pushkin is the ideal ending of a perfect night.

The aristocratic restaurant is extremely famous nowadays with local business men, but also with passing tourists. The café has become a landmark of Moscow due to its tradition, history and phenomenal service. And since history is the thing you want from a Russian café, you can find staff that speaks beautiful, almost pure pre-Sovietized Russian.

Back in the days when the café was opened, it was known as the only upper class restaurant where Russians could find standard European food and talk freely without the disturbance of KGB men. One thing to note, when it comes to history, it is expensive. The prices at Pushkin Café are little higher when compared with other restaurants and cafes in Moscow, but you are eating/drinking in a restaurant where the staff understands what five-star service means.

They say you come for the espresso, but you stay for the food at Pushkin. One can argue that the Pushkin has the most delicious pelmeni (stuffed dumplings made in Russian style).

When it comes to the food menu, you absolutely must try Russian pancakes (blinchiki), black caviar and borsht. From there, you can continue to the famous Tsar’s Sturgeon and some of the many deserts that Pushkin enjoyed.

Other notable delights in the menu include Boyar shtchi, a Russian soup with cabbage served in a pot with a top trust. And as a bonus, you get a glass of ice cold vodka with the soup. The stuffed dumplings can be had with 15 different options of stuffing, including salmon, wild mushrooms, meat and chicken.

The menu also includes vegetarian and dietetic recipes. For the high standard of cooking, the food at Pushkin is prepared in the famous Zepter kitchenware.

Last, but not least, you cannot leave Pushkin without a taste of true, genuine Russian vodka. You can ask the waiter for some recommendations

Café Pushkin is also famous for its “Pelmeni Festival”. During the festival that occurs in February, visitors can taste more than 10 unique fillings. Of course, the fillings are available only during the festival, and some of the options include pumpkin with meat, wild mushrooms with buckwheat, cottage cheese, cottage cheese and prunes, zucchini and cheese and much more.

Café Pushkin was born in a song written by French chansonnier Gilbert Becaud. For more than 40 years, the café existed only in the poet, Natalie”. In it, Becaued wrote “ “We are walking around Moscow, visiting Red Square, and you are telling me learned things about Lenin and the Revolution, but I’m thinking, ‘I wish we were at Café Pushkin, looking at the snow outside the windows. We’d drink hot chocolate, and talk about something completely different…’”

Due to the popularity of the song, people from France were traveling to Moscow in search of that famous Café Pushkin. However, they couldn’t find it.

Then, in 1999, Café Pushkin opened on the Tverskoy Boulevard, with Gilbert performing the iconic song during the grand opening.

The history of the name, however, dates much earlier. Tverskoy Boulevard was opened in 1796 and it became an instant hit for writers and people from the high society like the poet Alexander Pushkin. The poet could be found on the boulevard every day as he was drinking his espresso.