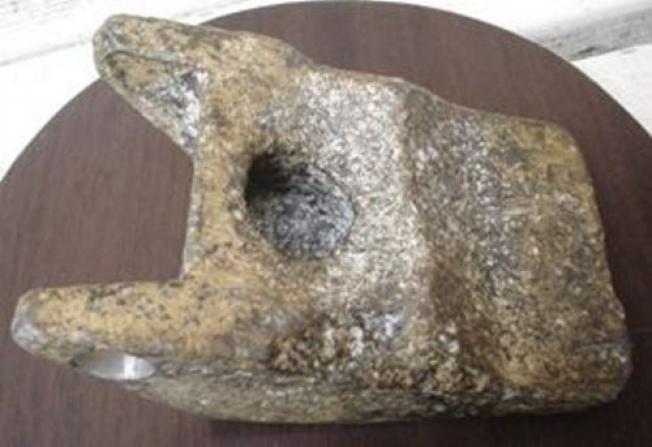 The main reason why there are conspiracy theories linked with the aluminum wedge of auid is the fact that the artifact is made out of aluminum, a material that was not known to mankind up until the 1800s. On the other hand, there are evidences that the wedge is approximately 10,000 years old. The exact composition of the wedge is 89% aluminum, 6,2% copper, 1,8% zinc, 2,84% silicon, 0,11% cadmium, 0,0024% nickel, 0,0023% cobalt and some other metals in extremely small amounts. Production of aluminum requires heat of at least 1,000 degrees and the material was found in 1808 and the mass production began in 1885. The wedge is covered with thick oxide layer that is at least 300 or 400 years old. Once found, the object was transferred to the Archeological Institute of Cluj-Napoca where it was examined and the age was confirmed. There is no information about the dating technique used.

The starting point of the alien conspiracy linked with the Wedge is the fact that the wedge is made out of aluminum, a metal that was not known to mankind and produced up until 1800s. And since there are evidences that the artifact is much older, the ground for conspiracy was born. People believe that the wedge has alien origin.

Some of the theorists that support the theory is Romanian ufologist Floring Gheorgita. She believes that the artifact landed on the Earth with an alien spacecraft. She is just one of the many archeologists and ufologists that think the wedge is evidence of extraterrestrial activity and presence on the Earth in the past. Those who have examined the formation of the Wedge claim it is not a natural formation.

However, there are also scientists that believe that the item is fake. As there are archeologists that claim the artifact has alien origin, there are also those who believe the aluminum wedge of aiud was made on Earth, but the purpose hasn’t been identified yet. With the limited amount of information about the wedge, the origin and the antiquity of the object is unclear.

It is worth noting that following 1995, the Wedge is no longer on display for the public and is hidden in an undisclosed location. There are pictures that confirm its existence.

As with every item that is subject to conspiracy, there are countless interesting facts and information about the Aluminum wedge of Aiud. Here are some of the fun facts.

- Workers discovered the wedge when they were digging a trench along the Mures River in 1974.

- The wedge was found next to mastodon bones. Mastodons are considered to be distant relatives to the Elephants.

- Two separate laboratories have tested the wedge, and the fun part is that both got nearly identical results. The two laboratories are the Archeological Institute of Cluj-Napoca and a laboratory in Lausanne, Switzerland.

- The wedge is composed of 89% of aluminum, but also contains zinc, cadmium, copper, lead, nickel and other elements in extremely small doses.

- Mastodons lived 11,000 years ago. While the age of the wedge is up for debate, some believe it is from the same era as mastodons. There are geological evidences that the Aluminum Wedge of Aiud is at least 10,000 years old.