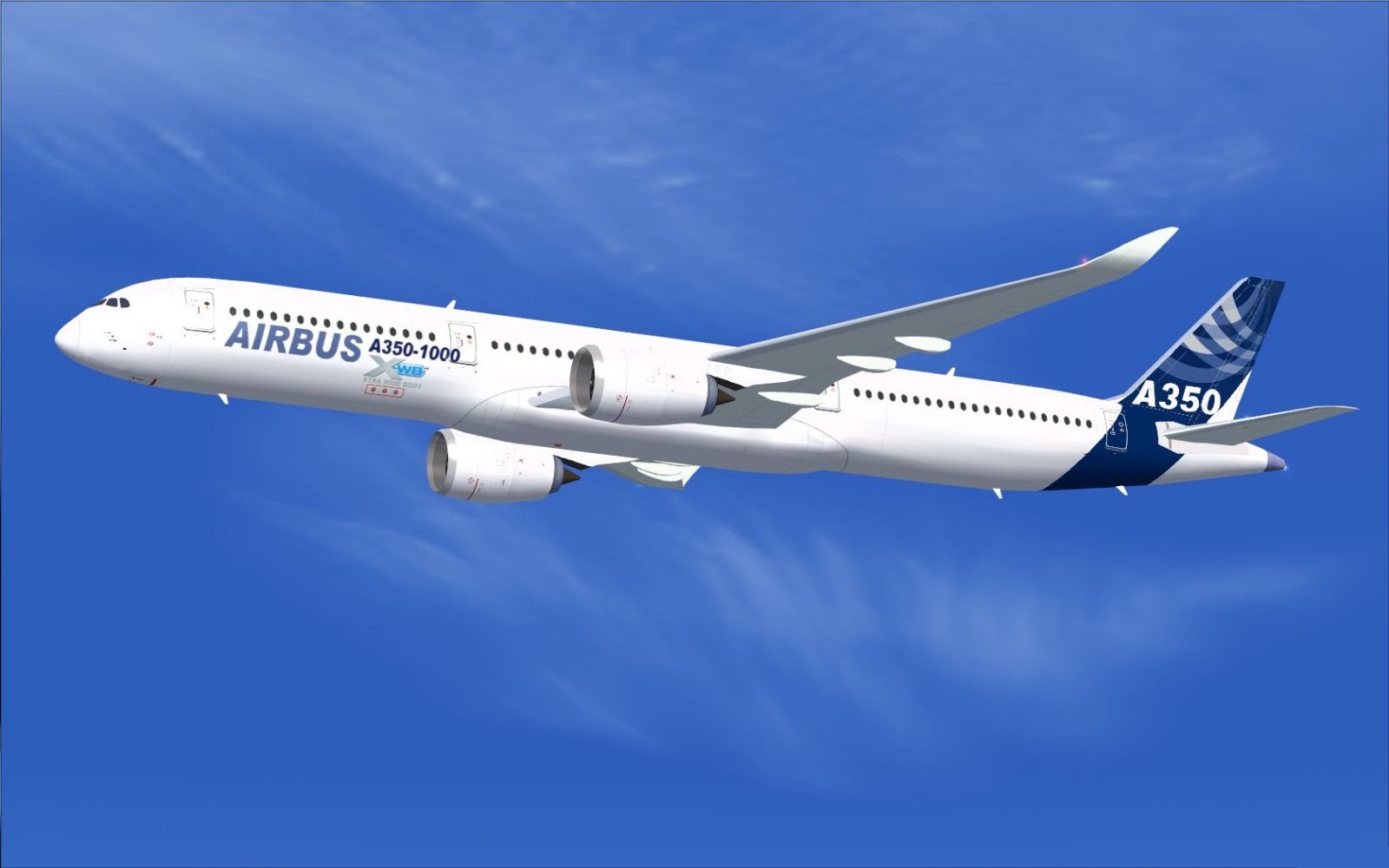 The aircraft took its first flight from Toulouse-Bagnac Airport at 10:42 am local time

The A350 program by Airbus originally started in 2006. The idea was conceived in 2004, and in 2006, Airbus redesigned the A330 fuselage with new features, new engines, and new aerodynamics. As a result, the A350 line was born with extra wide body. Now, the latest installment of that program, the A350-1000 made its first flight. The new Airbus took off from Toulouse in France. If everything goes according to plan, the new Airbus will be the largest plane in Europe, costing 335 million euros per aircraft.

The Airbus measures 242 feet from tail to nose, making it the longest fuselage version of the widebody jetliners. The A350-1000 can accommodate up to 366 passengers in three-class configuration. The economy class seats are 18 inch wide, allowing for modern comfort. The plane has a range of 7,950 nautical miles, making it perfect for long range flights from America to Europe, from America to Asia, and in between. If an aircraft carrier wishes for, the A350-1000 can be modified to accommodate 440 passengers. This way, there will be higher density, and less place between seats in economy class.

The A350-1000 is a member of the XWB family, delivering on all four key attributes. Those are design, comfort, service, and ambiance.

One of the reasons why Airbus believes that their A350-1000 jet will trump the competition is efficiency. According to company officials, the new jet is 25% more efficient than its competition thanks to additional payload capability and range. The jet is powered by the most powerful engine ever developed by Airbus.

Flights like Boston to Shanghai, or Paris to Santiago will be more efficient. The company states that the jet will be suitable for traditional flights like Dubai – Melbourne and Los Angeles – Manchester.

The Airbus A350-1000 will be the largest passenger plane in Europe with two engines. And according to some rumors, the plane will eliminate 1,000 working positions in Europe. The aircraft took its first flight from Toulouse-Bagnac Airport at 10:42am (local time). The plane flew over southern France for few hours before returning to the airport.

Following a full year of testing, the company hopes to deliver the first jet to Qatar Airways late next year. Qatar Airways was the first carrier to make delivery of the A350 in 2014. So far, Airbus has 195 firm orders carried by 11 airlines. As a whole, the A350 program has 810 firm orders. When it is all said and done, Airbus expects to capture 50% of the jet market.

The Airbus A350-1000 jet is manufactured with lightweight carbon-fiber composite material. This allows for better efficiency and more flier-friendly features. One example is that passengers will notice larger windows and lower cabin humidity.

Airbus and Boeing have been battling for supremacy of the sky for so many years. The A350-1000 is just the latest example of the ongoing battle. The new frontier for the companies is the twin-engine long-haul jet market. That is a segment that Boeing has dominated for more than 20 years.

But it looks like Airbus will finally have a saying in the market. The A350-1000 is designed specifically for outdoing the Boeing 777-300, one of the most popular products by the company. Boeing has so far sold 809 units of the aircraft. But according to stats from Airbus, their new product is 25% more fuel efficient, lighter, and just better.

That doesn’t mean that Boeing will sit tight. The company has a revamped version, the 777x program to counter the Airbus 350-1000. The 777x program started in 2013, and the result should be a plane that can carry more than 400 passengers in three class configuration. However, some people believe that the increased capacity of the 777x works against the plane.

Personal Triumphs
Meet Betty Cohen – The Woman who made the 90’s Awesome
Betty Cohen founded Cartoon Network in 1992, and she brought some of our favorite cartoons to life
Huaxi – Secrets of the Richest Village in China
From the outside, Huaxi is dubbed as a socialist village. But on the inside, it is actually a capitalist corporation, m...
Five Famous Streets you should Visit
Not all streets are created equal. Some are more beautiful, some serve as a history lesson, and others are just stunning
How Mark Zuckerberg made it to the Forbes Top 10 list?
In May he celebrated his 32nd birthday, and he had some 44 billion reasons to celebrate. That is right, his net worth is...