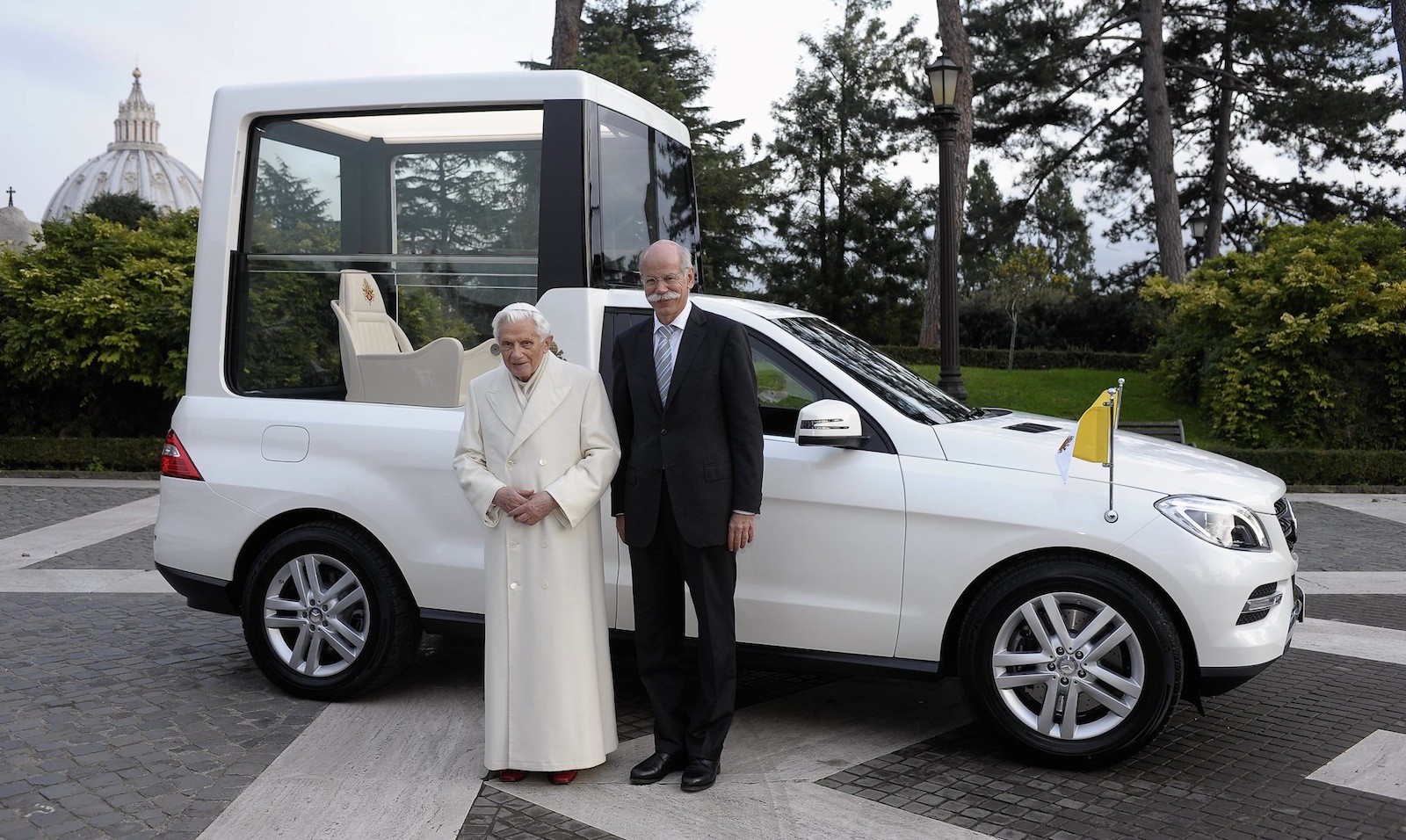 It wasn’t until 1929 that the Pope needed an automobile. It was then that a disagreement with the Italian government was resolved, and the Church received vehicles as part of the celebration

Over the years, Popes and the Church have used various transports to get from place A to place B. In most cases, Popes need a vehicle when they are outside the country, since they do not travel as much in Vatican. The history of the Popemobile starts in 1929, when the first vehicle for the Pope was designed. Before that, Popes used carriages to take them between places.

Truth be told, little travelling occur before the 1800s, and the Popes used carriages and royal chair for formal settings. Technically speaking, the vehicles before 1929 were not Popemobiles, but chairs and carriages.

Among those pre-cars Popemobiles, the Grand Gala Berlin is the one standing out. The carriage was created for Pope Leo XII in 1826 and was used for his trip in Berlin. The lavish wooden carriage included eight golden plumes at the top, as well as iconography and eagle crest.

The interior of the carriage was enriched with red velvet upholstery, and the roof included a dove to represent the Holy Spirit.

The carriage was used several times after the Berlin Trip, and the last appearance of the carriage was in September 1870, when Prius IX traveled to the Basilica of Santa Maria del Popolo.

It wasn’t until 1929 that the Pope needed an automobile. It was then that a disagreement with the Italian government was resolved, and the Church received vehicles as part of the celebration.

Among the first cars in the papal fleet is the 1929 Fiat 525. Other notable vehicles in the early history include the Graham-Paige 837, a car that was given to Pope Prius XI as part of the celebration for the agreement between Italy and Vatican. In 1929, Vatican City became an independent state, and Prius received the Graham-Paige from Detroit-based automobile company.

In June 1930, Citroen Lictoria C6 was presented to Prius by 200 workers. The Lictoria six is also part of the cars received by the church during the early celebration years. The interior of the car was designed to mimic a Venetian-Style drawing room.

The beginning of the white all-terrain vehicles began with the Fiat Campagnola, a vehicle that was given to Paul II in 1980 for his visit in Turin, Italy.

One of the most notable vehicles in the papal fleet is the Cadillac De Ville Parade Phaeton. General Motors made the cars especially for Paul II and his visit to Mexico City where the Pope addressed a stadium with more than 100,000 people. The car costed $600,000 but the Pope never drove it. However, Paul II blessed the car.

The big change in the papal fleet came during the 1950s, when Popes started to travel to international lands. John XXIII started the tradition, and he received the Mercedes-Benz 300D for his travel needs. The car featured an elevated throne seat at the back to let the Pope address the people.

Over the years, Mercedes-Benz has supplied the church with many popemobiles. The first one of those was the Mercedes-Benz Nürburg 460, which Pope Prius XI called a “wonder of modern technology”. The two and a half ton vehicle featured tinted safety glass and a control panel that the Pope used to direct the driver. The vehicle packed 80 ponies under the hood, and could reach top speed of 62mph. The interior included only one seat for the pope. Ferdinand Porsche designed the vehicle as a gift to the Pope in 1930.

Other Mercedes-Benz vehicles included the 300D, which was extensively modified to fit the needs of Pope John XXIII. The 300D is the first convertible in the papal fleet, and the car included rising throne rear seat. Next in line is the 300 SEL, used by John Paul II and specifically designed for the needs of Vatican. The convertible packed six-cylinder engine with 170hp.

Notable popemobiles designed by Mercedes-Benz also include the 1965 600 Pullman designed for Paul VI, and was the successor of the 300D. The roof was raised higher specifically for the Pope, so he has more headroom. One of the vehicles that resemble the current popemobiles is the Mercedes 230G, one of the first with the current design. The vehicle was used by Paul II during his trip in Germany in 1980. One difference is the back included a leather bench instead of a chair, and the Pope could stand in the vehicle.

The Church began alter the look of the Popemobile after an assassination attempt on John Paul VI in 1970. After the 1970 incident, the Pope didn’t travel much outside of Vatican, and after another assassination attempt at Paul II in 1981, the look of the popemobile had to be changed. The new popemobiles employed higher security features, but the Pope was still visible.

Some of the cars that John Paul II used include 1979 FSC Star, an armored popemobile with a structure that sits on a truck, a 1979 Ford D-Series (used as a party buss after Pope’s trip to Ireland), 1980 Mercedes-Benz 230 G, 1982 Range Rover State Review, 1982 Leyland Constructor (armored beast weighing 24 tons with bulletproof glass and armored doors), 1987 Mercedes-Benz 608, and a 1999 Bus which included glass-sides to keep the Pope visible. After the death of Paul II, the bus was turned into a mobile memorial of the Pope and was paraded around Mexico City.

Pope Francis changed the way the Popemobile works. Unlike his predecessors, Francis prefers to drive around in a car in which he can communicate with the people without the use of a bulletproof barrier. Speaking of the bulletproof vehicles, Francis once said that it feels he is “inside a sardine can” when driving in it.

A great example of Francis and his methods is the car he uses to drive around Vatican. For his Vatican journeys, Francis uses a 1984 Renault 4L, with passed 186,000 miles. The Pope was once quoted saying “A car is necessary to do a lot of work, but please, choose a more humble one” to the young priests in 2013. 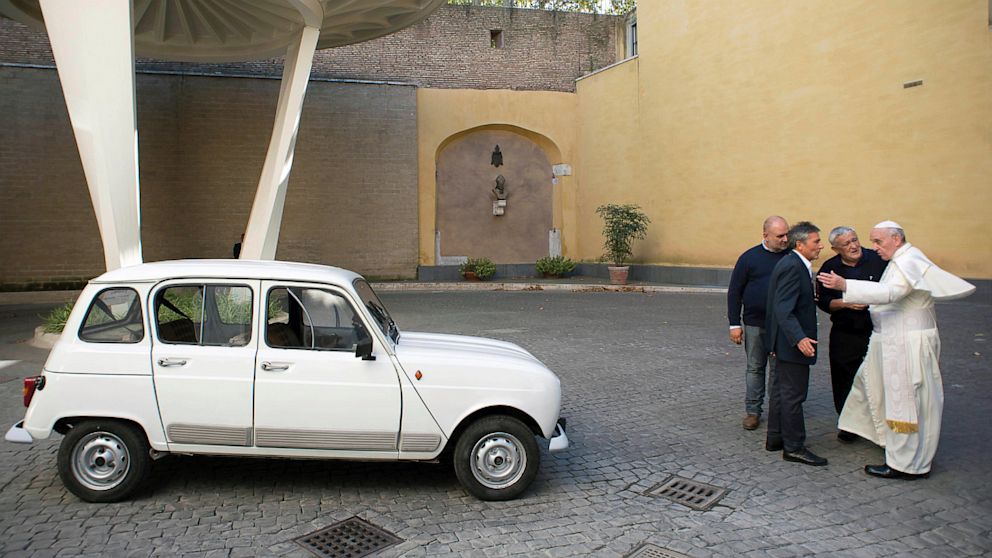 However, for his trip to the United States, the Pope used a modified Jeep Wrangler, which is very similar to the vehicle he used during his trip in South America. The Pope was provided with several Wranglers for each leg of his journey, and there were also backups in case of a breakdown. The Wranglers were shipped to the US in August, and the Secret Service has the possession of the vehicles. And while the Pope doesn’t like the bulletproof vehicles and security personnel, he had to accept it. The Pope once also said that “It’s true that anything could happen. But let’s face it, at my age I don’t have much to lose.”

Francis has been at the helm of the church for two and a half years now, and he has used several modified cars. Some of the vehicles used by Pope Francis include 2014 Hyundai Santa Fe, 2014 Jeepney, 2015 Isuzu D-Max, 2015 Kia Sedona. He has also used 2015 Fiat 500L to get to the Vatican embassy in Washington.