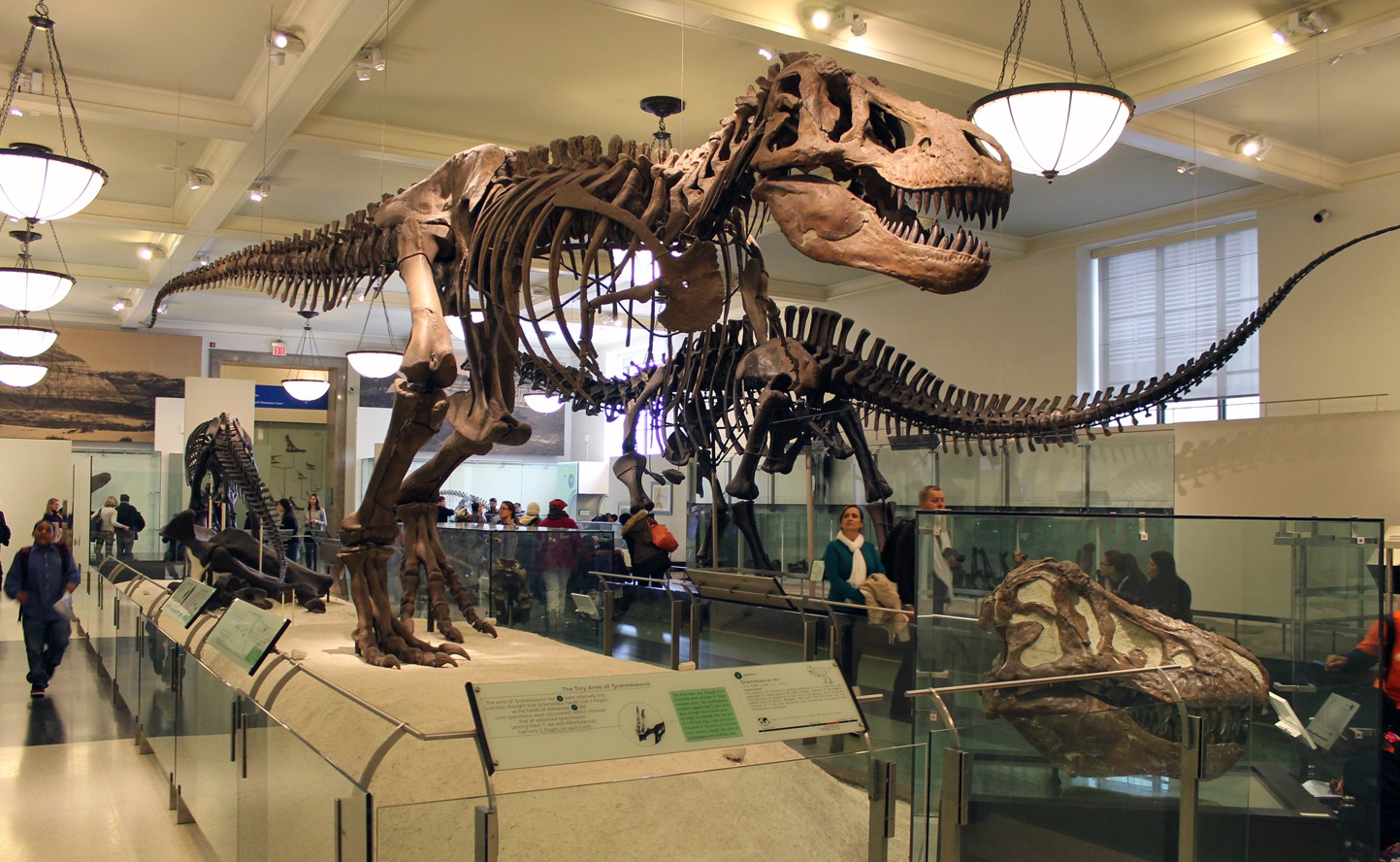 Even though most of the fossils are hidden from the public, the Museum still boasts the best Dino Tour in the world you can find. The exhibits can be seen via self-guided tour that usually lasts two hours

"To discover, interpret, and disseminate—through scientific research and education—knowledge about human cultures, the natural world, and the universe." That is the mission of the American Museum of Natural History. The museum contains the largest collection of dinosaur fossils, and is arguably considered the “home for dinosaur halls”. The museum is located in the Upper West Side of New York City. There are 27 buildings in the Museum, all of which house 45 permanent exhibition halls. Among the 32 million specimens, dinosaurs are maybe the most intriguing, since they are rarest to see.

The good news is that the Museum contains huge amounts of dinosaur and mammalian fossils. The bad news is that most of the fossils are hidden from the public and are kept safe in storage areas. The facility that would be a dream come true for dinosaur lovers is the Childs Frick Building, a ten story building that houses the largest collection of dinosaurs in the world. The top three floors are reserved for laboratories, but the basement and the lower seven floors are all populated with dinosaur fossils.

Even though most of the fossils are hidden from the public, the Museum still boasts the best Dino Tour in the world you can find. The exhibits can be seen via self-guided tour that usually lasts two hours. You can spend more time if you want, but the estimated time is two hours. What will you see during those two hours?

- Barosaurus – the famous plant-eating dinosaur that is one of the biggest. The enormous dinosaur is considered a middle ground between predator and prey among anthropologists

- Tyrannosaurus Rex – composed of real fossil bones, the Tyrannosaurus Rex you see in the museum is the same as the one in the movie “A night at the Museum”. The American Museum of Natural History even offers such tour. But back to the T-Rex, who is mounted in a horizontal stalking pose in the Museum from where you can see his 4’ long jaw, and his 6” long teeth. His massive thigh bones are just another indicator of the enormous power the dinosaur had in his time

- Stegosaurus – One of the most mysterious dinosaurs that ever existed. Scientists believed he probably had second brain. Fun fact: his brain is so small, there is actually space for another in his head. The reality is that he did have just one brain

- Apatosaurus – Apatosaurus has been one of the focal points of the Dino collection since 1905 when it went on view. He was the first sauropod dinosaur mounted at the Museum

- Deinonychus – This dinosaur belonged in a group called “hand-robbers” or maniraptors. Thanks to his sharp claws placed on both his hands and feet, the deinonychus was able to catch and grasp prey in a matter of seconds. He was one of the fastest dinosaurs, and his long legs with hollow bones indicate agile movement

- Duck-Billed Dinosaur – Here visitors can see the Anatotitan, a duck-billed dinosaur. The group is one of the most wide spread, and in their time, they lived in Asia, Europe and America. 70 million years ago, these dinosaurs occupied forests in river valleys and swamps

- Triceratops – Among with T-Rex, the triceratops are one of the most popular and known dinosaurs. They have a large frill on the back of their skull, and two large horns over their eyes

- Psittacosaurus – This dinosaur did not have any horns, but it still belonged in the same group as triceratops

- Corythosaurus – These species are among the strangest in the dinosaur world. Their strange skull contains extended tubes. Paleontologists believe the tubes formed nasal passages back in the day

- The Glen Rose Trackway – there is no dinosaur to be seen here, only a series of fossilized footprints. But there are 107-million-year old footprints. Think about it. 107 million old! These footprints give even better view and help you understand the ways of the dinosaurs even better than fossils

- Dinosaur Mummy – A fossilized imprint of a duck-billed dinosaur, the mummy represents one of the most complete pieces of Mesozoic dinosaur ever found. Many consider the greatest discovery in paleontology ever.

In January 2016 the museum added a new exhibit, one that featured a dinosaur that paleontologists haven’t named yet. The 122-foot long dinosaur was discovered in Argentina, in the Patagonian desert. The “Titanosaur” is considered to be herbivore. His species weighted somewhere in the range of 70 tons, and lived in the forests.