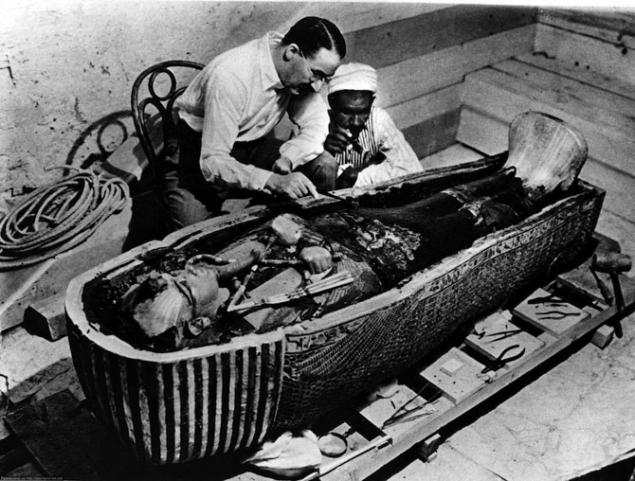 One of the biggest inventions in science happened by accident. Yes, we are referring to Isaac Newton and his gravity theory. The “apple incident” has become a cult nowadays, but nobody can say for sure if it happened like the history books tell the story, or not. Be as it is, it is just a strange coincidence.

And some even believe that the universe was created by accident. The big bang theory is more than just an American TV show. You can even argue that every one of us was born by accident, a happy accident of our parents meeting and falling in love with each other. But let’s take a look at some historic events that happened by accident. Some of them are strange, some are funny, but they are real.

Russia should have known that Germany will invade the country. Just days before the German invasion, Soviet archeologists found the Tomb of Tamerlane and uncovered it. It happened on June 20, 1940. Tamerlane is a descendent of Genghis Khan, and his tomb has a warning inscription “Whoever opens my tomb will unleash an invader more terrible than I." Just two days later, Germany invaded Russia. Luckily for the Soviets, the Germans were not prepared for the cold winter, and some experts and historians even state that attacking Russia was Hitler’s biggest mistake.

This hybrid never saw the light of the day, but it is just strange enough how a scientist can come up with such an idea. The huamanzee is actually a hybrid, a hypothetical chimpanzee and human hybrid. In the early 1920s, a soviet biologist tried to create an ape hybrid, mixing human sperm, and injecting it into chimpanzee females. Suffice to say, his experiment was not successful, but he came a long way.

Even some of the most important medicine discoveries were made by an accident. Millions of people died from bacterial diseases before the invention of penicillin. Suffice to say, Alexander Fleming, the scientist inventing Penicillin won a Nobel prize. Mankind owes debt to Mr. Fleming, and his mistake.

During 1928, he was conducting experiments in his lab, researching the flu virus. At one point, he noticed that bacteria cultures was infected with a fungus. Fleming examined the fungus more thoroughly, noticing that there is a clear ring around it. His conclusion was that the fungus was toxic to the bacteria in the dish. The doctor isolated the mold, and named the new discovery penicillin. The rest is history, and Fleming is widely regarded as one of the saviors of mankind.

The Union winning US Civil War

Many can argue that every war is won by accident. Careful strategy and tactics help, but you always need some luck to get to the finish line. For the US Union, that luck came in a form of a misplaced copy of the battle plans by the Confederate Army. A union soldier found the plans, providing the Union with an upper hand. As a result, France backed the Union, and the war ended shortly after. The Union won the war thanks largely to a discovery by one lucky soldier.

This is probably one of the strangest coincidences you’ll find in the history books. It happened during World War II, and it is even hard to follow who sank who. Let’s start with the fact that the British army disguised a passenger ship into a battle ship. The ship in question is RMS Carmania, disguised as the SMS Trafalgar, a German passenger ship. And it gets more interesting, as that particular ship sank a German ship in 1914. The destroyed ship was actually the real Trafalgar, which was actually disguised to look like the British passenger ship RMS Carmania.

The discovery of Vibrators

Speaking of best friends in sex, the blue pill that men love was never intended to be cure for erectile dysfunction. The company producing Viagra, Pfizer, actually was developing a pill for chest pain. But patients showed “unusual stiffness” and further tests showed that the pill, called UK-92480 inhibited the production of an enzyme. That same enzyme undermined erections. And that is how Viagra, the fastest selling drug was born.

Pearl Harbor could have been prevented

Pearl Harbor is widely regarded as the battle that changed the outcome of the World War II. The Japan forces attacked United States, and the US, previously a neutral country, joined the alliance and turned the tides of war. But the attack could have been prevented, if the FBI didn’t ignore evidence from an agent. The agent in question is Dusan Popov, a Serbian double agent who was often drunk and was prone to gambling.

A US General was responsible for the term “hooker” which signifies a woman selling her body for money. It was General Hooker who had groups of females during the Civil War go around soldiers and satisfy their urges. Prostitution was a big thing back then, and General Hooker thought that his men would do better in battle if they have their urges satisfied.

One of the best musical bans of our time was created in a train. A happy coincidence, Keith Richards and Mick Jagger met in the same train at the Dartford Station in Kent. They met on October 17, 1961 and the band was formed the next year.

Richards was on his way to art college, while Jagger was on his way to the London School of Economics. Richards was wearing his electric guitar case, while Jagger was wearing blues records in his arms. They talked about music, and went on to form one of the iconic group. Some of the fans of Rolling Stones make pilgrimages at the station’s platform nowadays.

Some consider this fact to be a myth, but others believe it is true. There were a number of reasons why Napoleon lost at Waterloo, but none is more fun than the fact that he was suffering from diarrhea the morning of the fight. He was actually suffering from hemorrhoids, and diarrhea was a side effect. This fact is confirmed in Phil Masons’ book, titled “Napoleon’s Hemorrhoids: And Other Small Events That Changed History.”

This nurse deserves a special place in history. She was an ocean stewardess and nurse, and she managed to survive not one, not two, but three separate disasters. She survived the sinking of the RMS Titanic, but that was way after she survived another other Olympic-class ocean liners and their sinking.

Her first accident happened on June 14, 1911, when she was working on the largest civilian liner at the time, the RMS Olympic. The boat crashed with another cruiser, but was able to make it to Southampton, despite the flooding and heavy damage.

One year later, she was part of the crew on Titanic, and four days into the voyage, the ship hit an iceberg and sank. She was responsible for helping people who do not speak English, and boarded the 16th lifeboat along with them.

She continued her career as a stewardess, and boarded the HMHS Britannic in 1916. The ship hit a mine, sank in the Aegean sea, and 30 people were lost in the tragedy. Fun fact: she even managed to grab her toothbrush before the ship sink, the one item she missed from the Titanic sinking.

Conspiracy theorists believe Barack Obama reign started on a bad foot, as few days after he was elected president, the lottery was held in Illinois, and the winning combination had the 6-6-6 number. 666 is the number of the Devil. It is hardly true that Obama is the devil, but some people consider him to be the Antichrist, as proclaimed in religious books.