Tiffany & Co. — “Some Style is Legendary”

Tiffany & Co. is an American luxury jewelry and specialty retailer headquartered in New York City. It sells jewelry, sterling silver, china, crystal, stationery, fragrances, water bottles, watches, personal accessories, and leather goods.
If you are looking to spend top dollar on an engagement ring with a brand name unlike any other, Tiffany & Co is worth a look. However, if you do not care about the brand you buy from and instead are looking for an affordable, good-quality diamond engagement ring, you should consider some other brand.
Tiffany is known for its luxury goods, particularly its diamond and sterling silver jewelry. The company was founded in 1837 by the jeweler Charles Lewis Tiffany and became famous in the early 20th century under the artistic direction of his son Louis Comfort Tiffany.
Tiffany & Co. presents “Some Style is Legendary,” a short film capturing the making of the fall 2016 campaign —Legendary Style—directed by Oscar®-nominated, and Emmy Award-winning filmmaker R.J. Cutler. Cutler, director of The September Issue, casts an eye upon the rarely seen side of Vogue’s legendary creative director-at-large, Grace Coddington. The documentary takes viewers behind the scenes as Coddington partners with Tiffany to break new creative ground, on her first ever brand campaign. 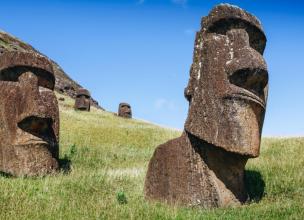 Art
Easter Island – World’s Most Secluded Inhabited Island
The first inhabitants were the Rapa Nui, a Polynesian society that arrived there between 700-800 AD. They developed a ri...
Newgrange – Is it Older than Stonehedge?
According to Ireland’s Ancient East, Newgrance is a 5,200 year old passage tomb located in the Boyne Valley. It was bu...
Understanding the Mandela Effect – How do we Create False Memories?
This effect occurs when a large group of people believe an event occurred when it did not. There are many examples in po...
Byzantine Style – Features and Best Examples
Mosaics were the signature characteristic of Byzantine architecture and Byzantine style. These mosaics illustrated relig...