Cousins Jamie Mackenzie and Ben Wylson set off on an extraordinary three year adventure; without knowhow or training they attempt to ride bicycles on every continent without using airplanes.On their a...

Karate Kid is one of the most famous and popular movies of all time. Many argue about who is the “real” Karate Kid in the movie. The movie is so well done, that some of the fans cheer for th...

The Bubble Gum King is one of the best documentaries ever made. The documentary follows the life story of Andy Paris. He rose to stardom by starting a bubblegum business. He started his business...

Some believe that the “so-called” Meetei civilization is a hoax, as there is no archeological proof of the civilization living in Manipur or in either part of Northeast Asia. There is not even ...

My name is Maia Jenkinson and I'm the director of the spanish Documentary Les Nostres Dones (Our women) which we just released free online with english subtitules! It was a social project with no bu...

From producer Nick Polizzi, this incredible documentary follows 8 people with life-threatening disease into the Amazon for a month-long ‘healing’ from local tribes people who claim to know of spec...

In a sanctuary in the empty Californian desert, Tonya Littlewolf runs a rescue and rehabilitation for wolves. Many were rescued from breeders, some needing a lot of hands on attent...

08:32
History +3
TimeLine – A Brief Introduction To The History Of Timekeeping Devices

A short, animated documentary on how time has been measured in the past, and how we measure it now. The film walks you through the timeline of people and inventions that kept track...

The Last Ice Merchant tells the story of Baltazar Ushca, who for over 50 years has harvested ice off of the glacier on Ecuador’s Mount Chimborazo twice a week. A family business,...

A short documentary profiling the life of former Canadian Kickboxing Champion Ian “The Jackal” Jacklin. His incredible life story including his rise to kickboxing champion is n...

52:07
Indie +1
Revolution One: A Story of Off-Road Unicycling

Filmmaker Dan Heaton brings a unique look at an activity that many people don’t know exist: Off-road unicycling. This film explores the history of the sport over the past 30, tal...

From filmmaker George Clipp (A Mongolian Couch) comes a look into the world of politics in the small town of Sagada in the Philippines. Following Richard Yodong, a deputy-mayor hop...

Two young Maritimers take a 4 month journey across Canada, from the East coast to the West coast, volunteering at 10 small-scale organic farms along the way. In an effort to connec...

Let’s Talk About Food is a short documentary film that explores why people eat meat.Do you eat meat? Have you ever asked yourself, “Why do I eat meat?” Watch to find out why ...

After traveling world-wide with a camera in-hand following the cycling culture in races and random rides, the team at Cycle Me Home brings you Feel Free. From fixed-gear races to c...

A short documentary on the people that surf on the Severn Bore, a river tidal wave in Britain that happens naturally once a month. The Severn Bore is known as the world’s second ... 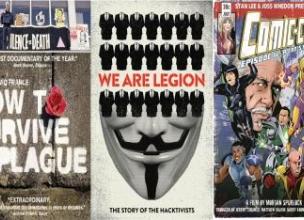