What do Muslims think of ISIS? 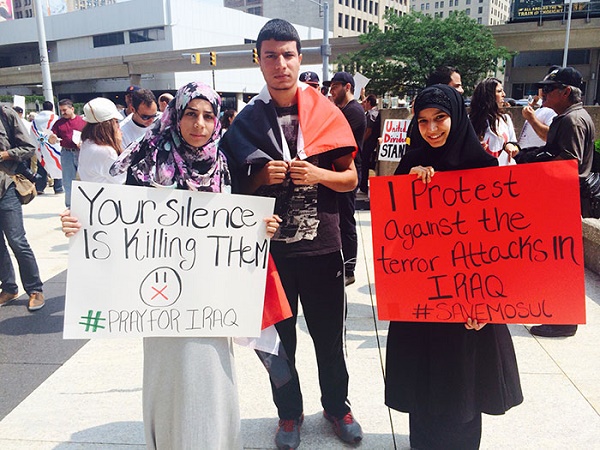 Back in 2014, Muslims were criticizing Israel for the attacks on Gaza. Lately, however, ISIS is not getting the same treatment, bearing the question what Muslims think of it?

Lately, there has been an insistent call for Muslims to condemn ISIS. According to many experts and politicians, Muslims had done too little in public to express their solidarity with the victims in recent ISIS attacks. Additionally, Muslims are not condemning ISIS for its attack on tolerant democracies in which most Muslims live. All that bears the question, what do Muslims really think of ISIS? The question is more complex than simple, and as such, has more answers.

Why it is wrong to ask Muslims to condemn ISIS?

The first problem is that non-Muslims identify ISIS as the only terrorist group. In reality, at least in past years, there have been more terror attacks committed by white male Christians than Muslims. That is at least in the United States.

The question experts should be asking is, “Should Muslims condemn terrorism”? Now that is a question that has a clear “Yes” answer, unlike the one regarding ISIS.

Killing civilians is something everyone should condemn, not just Muslims, but Christians, Buddhists and everyone else.

Another aspect is that Muslims do not form a homogenous entity. You cannot refer to Christians in a similar way. So why should Muslims be referred as a united, homogenous entity? And isn’t it illogical to blame an entire group of people for the actions of a minority who falsely claims religious purity?

Last, but not least is the fact that so far, more Muslims have died at the hand of ISIS than non-Muslims.

Back in November, when millions of people were fighting to get the better Black Friday deal, around 100 Muslims gathered in Dearborn, Michigan to protest ISIS and Muslim terrorism overseas. The group called themselves “Dearborn Muslims Against Terrorism”. Some of the leaders of the group spoke against ISIS, how they have no faith, no morality and no god. Protesters referred to ISIS as “savages”.

In the same time, anti-Muslim attitude has been running high in Europe, especially after the Paris attacks. Republican candidates in the US also call for increased security against Muslims, with Donald Trump going as far as requesting registry of Muslims living in the United States of America.

And while the protest in Dearborn was small, it was still a great step forward, showing that Muslims around the world want peace.

Earlier in December, Saudi Arabia was the leader of a new coalition and alliance, including 34 nations forming an Islamic military alliance against terrorism.

And while the coalition claims to fight against every type of terrorism, it is clear that ISIS is the main goal, at least for now. Western media was quick to point that ISIS got trumped by the truer believers in Islam.

However, what the alliance lacks, at least for now, is a strategic plan, a declared objective, troops or budget.

Saudi Arabia has taken a new approach towards terrorism a year ago, when the country expanded the definition last year. There were new laws and royal decrees effectively criminalizing all dissent.

Some of the countries on the 34-nations Military Alliance list include Libya, Palestine, Pakistan, Egypt and others.

And while many western experts are calling the coalition a triumph, some are quick to point that the alliance might do more harm than good. For starters, the forming of the coalition plays right into the ISIS narrative. At the moment, the narrative that ISIS is representing is “True Muslims against Western imperialists and false-Muslim dictators”. Saudi Arabia, on the other hand, is trying to enforce the narrative that the entire world (including the Muslim) is fighting against false-Muslim radicals.

And there lies the problem. Saudi Arabia is effectively dividing Islam into establishment Islam and ISIS Islam, giving ISIS the tools and assets it needs to recruit more followers and supporters.

When asked about ISIS and Islam, most Muslims refer to Chapter 5 verse 32 as the reason that the Holy Book, Quran, does not justify killing of innocents. The problem is, many experts believe there is a loophole in the verse, one that Muslims do not understand when they read the book on their native, Arabic language.

There are caveats and conditions in the verse, and those are “unless it be for murder” and “or for spreading mischief in the land”. Those two caveats are the key element of ISIS, and how the organization is managing to recruit new people.

The verse is highly vulnerable for blatant exploitation. The verse bears two questions:

1. Who decides the meaning of “mischief in the land”?

Different people can explain and understand that section differently. What ISIS is doing is interpreting the verse according to their ideology, pointing to the West as the “one” spreading “mischief in the land”. Therefore, at least in ISIS eyes, it is justified to target the Western world for killing and terrorism.

Last, but not least, why the world has been so criticizing on Muslims is the Israel situation. For example, when Israel was bombing Gaza and Palestine, millions of Muslims gathered at the streets of Paris, New York, London and other big cities to protest against Israel. That hasn’t been the case in the ISIS scenario. Back in 2014, social media was dominated with outrage against Israel and Zionism. And while there is Muslim critique on ISIS right now, it is not near the level of the critique that Israel got in 2014.