Virgin Rainbow - The most precious rock in the world 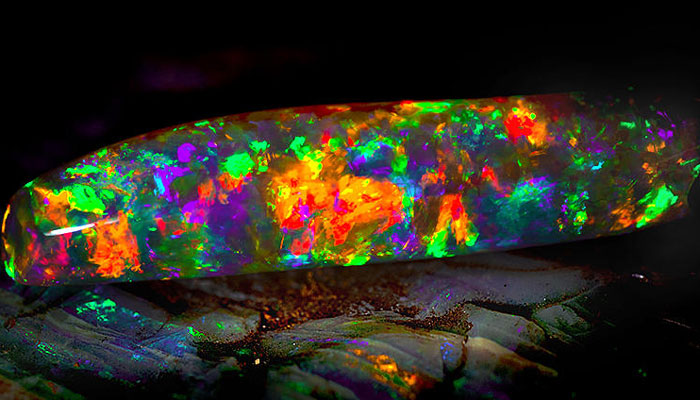 The most glorious opal will be shown during the exhibition at the South Australian Museum in Adelaide. The opal, called “Virgin Rainbow” will be shown for the first time to the public after it was discovered some years ago.

The Virgin Rainbow is valued at more than $1 million. First discovered in 2003, this will be the first time the opal was shown to the public’s eye.

When you think of the price of the glorious opal, the first question that pops into the minds of many people is what makes it so special? Aside from rarity, the Virgin Rainbow has many features that some precious rocks could envy.

When it comes to colors, the Virgin Rainbow features red, blue, yellow and black sparkle through the gem. The light moves around, and the colors constantly change and mutate. Simply put, it is amazing trick of nature.

What makes the opal so special is the trick of mixing water and silica into a gel, and the result is a hardened, multi-colored stone. Like many other opals, the light-refracting qualities are achieved from a composition of silica and water and was formed from the “opalised” fossils of the dinosaurs.

But the biggest advantage of the Virgin Rainbow is its history, age and origin. When the opal first began to form, dinosaurs were still alive. It took few million years for the Virgin Rainbow to gain the form that he rock has today.

The Virgin Rainbow was discovered in a mining town in Southern Australia, Coober Pedy. It is a small mining town, but the region produces more than 90% of the opals in the world. The town was specifically built underground, providing miners with conditions to battle the extreme temperatures and dust storms that are frequent in the area.

Speaking of history of opals, they were first discovered in the Australia in 1914. The man called Willia Hutchison is responsible for the discovery of opals in Australia, when he returned from his search for water with precious gemstones in his hands.

No “Most Valuable Tittle”

Even though the Virgin Rainbow is unique and probably best ever when compared to other opals and their colors, the gemstone still didn’t manage to win the most valuable opal title.

The opal exhibition that will be on display in Australia will be one of the most unique ever. The exhibition opened on September 25, and will run through 2016 (February 14).

The exhibition, simply called “Opal”, will feature both the Virgin Rainbow and the Olympic Australis, as well as some other famous opals.

From jewelry embedded in rock, this exhibition will probably go down as one of the best in history. The visitors will be treated with a spectacle of opals and their unmatched color and beauty. And when you think that the gemstones shown origin from the time of the dinosaurs, the history itself is astonishing. The exhibition is organized to celebrate an impressive achievement, 100 years of opal mining in South Australia.

In addition to the gems, visitors at the exhibition will get the chance to learn some of the history and culture of mining operations. As the organizers say it, “they want to showcase the history and beauty of the opal, but also the hard work and dedication that goes and is required from miners.