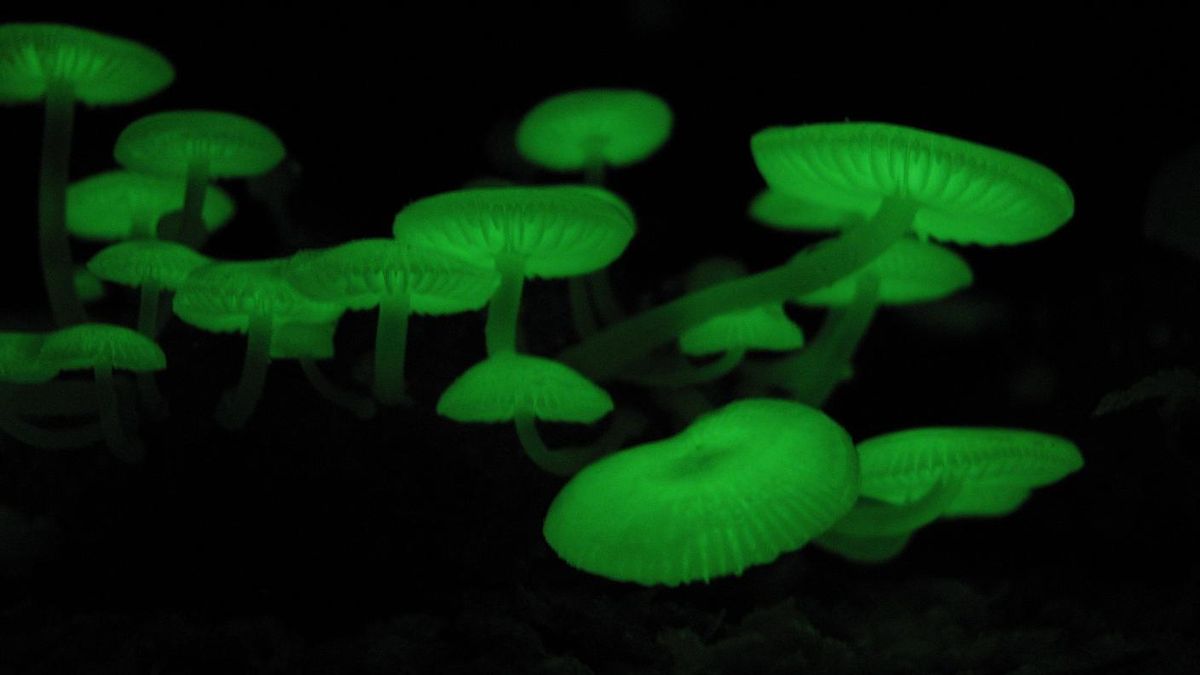 We are all accustomed to the regular type mushrooms, the champignons mushrooms. That is just one of the many hundreds of mushrooms

Most of us love and eat mushrooms. They are delicious. For vegetarians, they are the best source of protein. With that in mind, we are all accustomed to the regular type mushrooms, the champignons mushrooms. That is just one of the many hundreds of mushrooms. And today, we will discuss some strange and weird looking ones. Some of them are edible, some are not.

Puffballs are unique in a way they do not have an open cap with spore-bearing gills. Instead, spores are produced internally. As the spores mature, they form a mass called gleba in the center of the “fruitbody”. The gleba often comes in distinctive colors and texture. When the mature fruitbody bursts, clouds of brown dust-like spores are emitted. This is why the mushroom is called puffball. 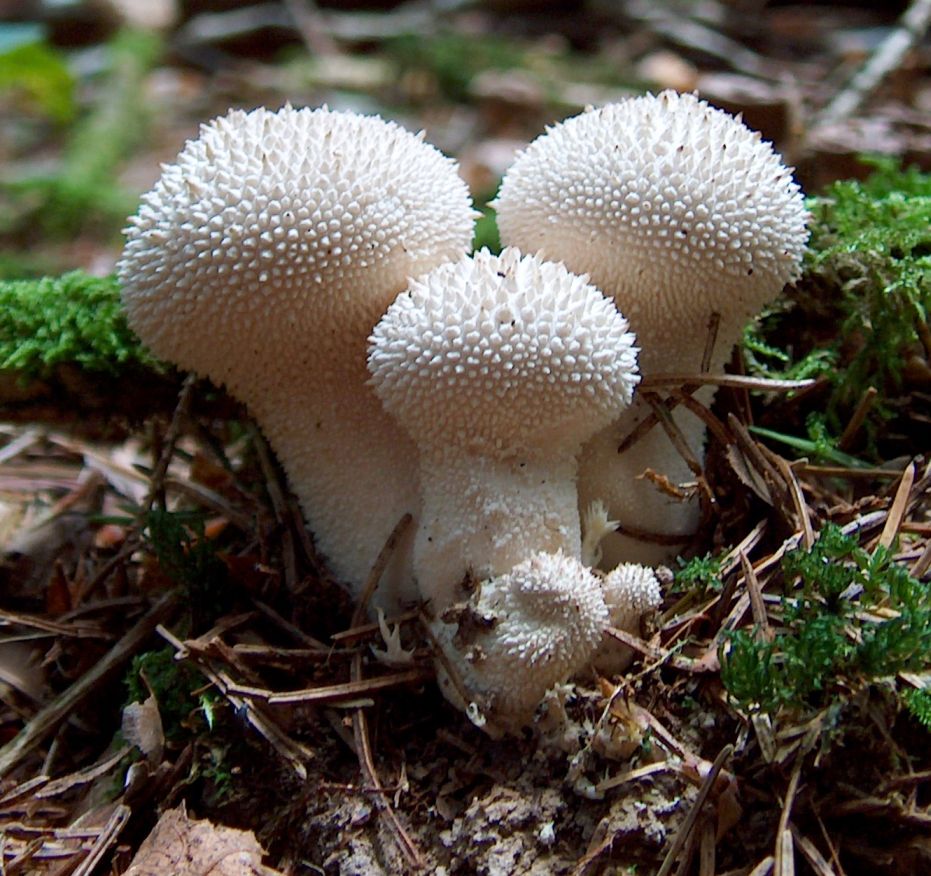 Most puffballs are not poisonous. However, some types look similar to young agarics, most notably, the deadly Amanitas. Therefore, puffballs gathered in mushroom hunting are cut in half lengthwise, in order to detect whether they are edible or not. Puffballs in the edible stage, which is before maturation of the gleba, have undifferentiated white flesh within. The gills of immature Amanita mushrooms can be seen.

The giant puffball can reach a foot in diameter, and is difficult to mistake for any other fungus.

These luminous mushrooms are somewhat of a mystery. Scientists are having a hard time to solve the puzzle of the fungal bioluminescence. They grow in the lush forests of Southeast Asia, and are considered botanical gems.

The mushrooms emit a spooky green light. First described in 1860, the fungus can be found in Japan, Indonesia, Brazil, Sri Lanka, Australia, Taiwan, and Polynesia.

In 1838, these fungi were classified as white-spored agarics having a tough central stipe. They could dry out, but later revive if moistened. 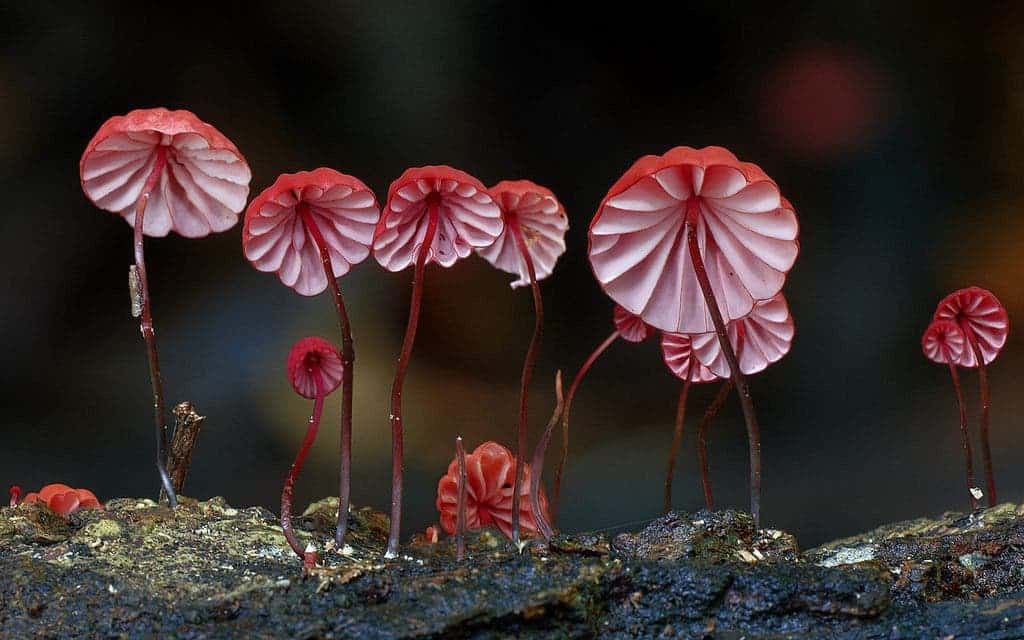 The name of the fungi, Marasmius, comes from the Greek word “marsmos”, which menas drying out.

This genus in the fungus family Physalacriaceae is a monotypic genus. The rhodotus genus consists of a single mushroom species, the palmatus, also known as rosy veincap or wrinkled peach. 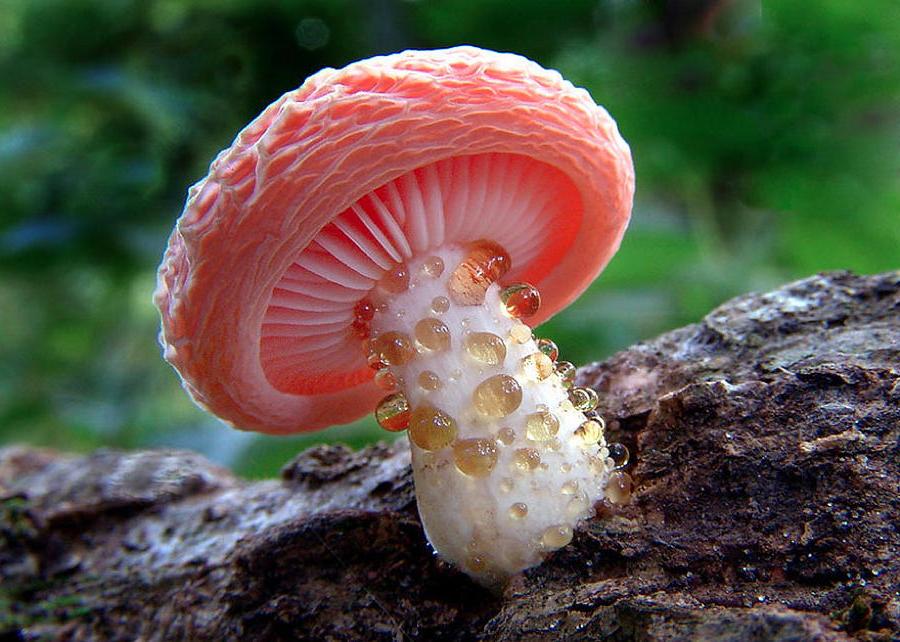 Native to North America, Asia, and Europe, they are found growing on the stumps and logs of rotting hardwoods. Mature specimens can be identified by the pinkish color and distinctive ridged and veined surface of the rubbery cap. There are variations in size, shape, and cap color due to quality of light received during development.

Known as the “veiled lady” because of its lacy skirt, this mushroom is not just weird looking, but also mysterious. Studies have claimed that this bright orange mushroom found in Hawaii can cause women to orgasm. All it takes is one sniff of its odor. 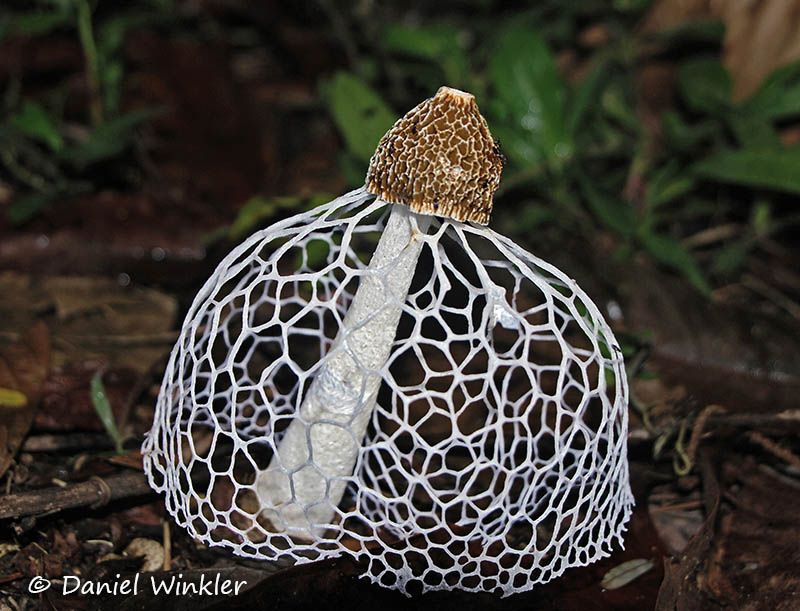 Commonly called the bamboo fungus, the bright orange mushroom grows on the volcanic slopes of Hawaii. And while some scientists claim the smell can cause a woman to orgasm, some that have tried it, say it is “hands down the worst smell that has ever violated their nostrils”.

The mushroom was discovered growing on lava deposits dating back 10,000 years.

This small brightly colored mushroom grows in deciduous and coniferous forests. The mushroom is edible, but the problem is it can absorb arsenic from the soil. Because of the amethyst coloration fades with age and weathering, sometimes it is difficult to identify. Therefore, the name deceiver. 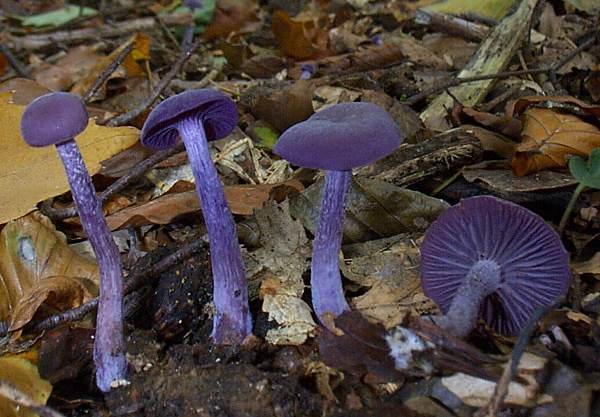 The fruit body initially appears like a whitish egg, attached to the ground at the base by cords. Commonly known as red cage, the name alludes to the striking fruit bodies shaped like a round or oval hollow sphere. 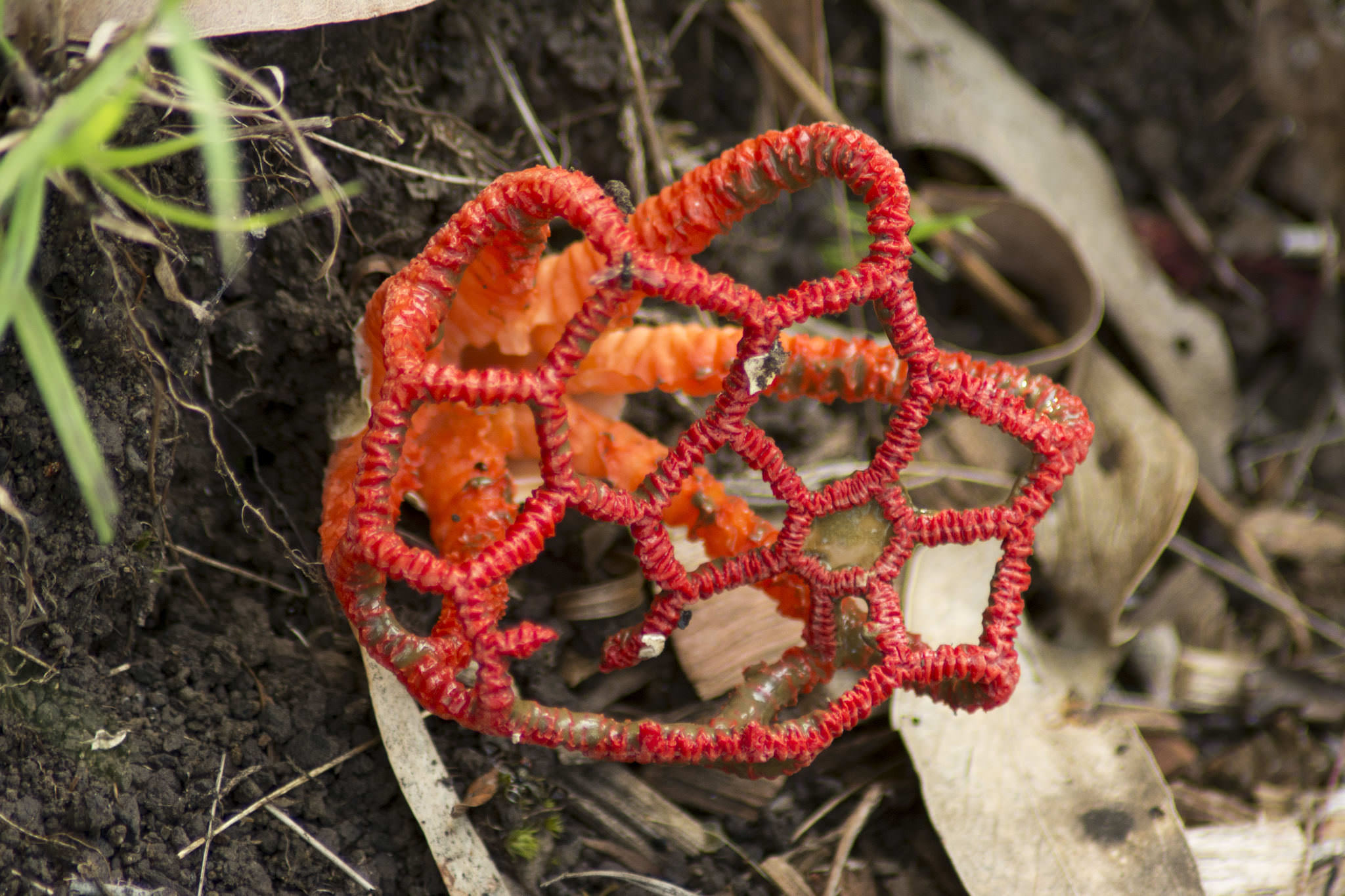 The fungus feeds off decaying woody plant material, and is often found alone or in groups of leaf litter. 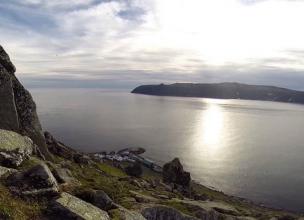 Strange
Getting to Know the Diomede Islands – Yesterday and Tomorrow
The Diomede islands are just three miles apart, but the bigger island is almost one day ahead of the smaller, 21 hours t...
Top 10 Times Dogs Made it to the Guinness Book of World Records
We can safely say all dogs are amazing. Yet, some pups go above and beyond and excel at what they do. You might not know...
Weird Facts about Tiramisu – The Italian Delight
Tiramisu is a coffee-flavored Italian dessert. Made of ladyfingers dipped in coffee, and then layered with a whipped mix...
Amazon River Amazing Geography Facts
No matter what, it is amazing that the Amazon River is one of the longest and most amazing. The quantity of fresh water ...