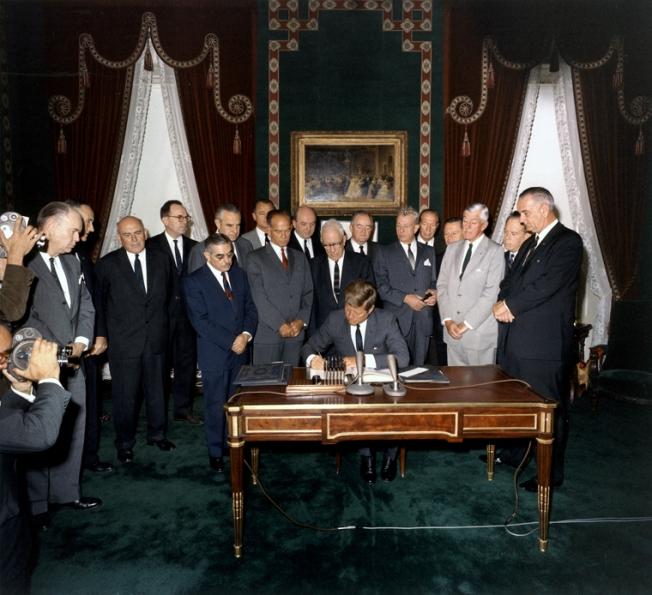 Following eight years of negotiations, the US and the Soviet signed the treaty in August 1963, putting an end to a Cold War that had the potential to escalate into full time nuclear war

On August 29, 1949 in a large field in Kazakhstan, the Soviet Union blew the first atomic bomb. The field where the Soviets were performing atomic bomb tests spread to 300 square meters field. Between 49 and 89, Russians conducted more than 450 tests, 100 of which were detonated on the ground or in the air. For the first test, the Soviets used a 22.4-kiloton bomb which they detonated atop a tower. In the same time, the US conducted several atomic bomb tests, but the Americans have also used bombs to end the World War II, bombing Hiroshima and Nagasaki. Following tensions and tests between the two countries, in a period which was known as Cold War, the leaders of the Soviet Union and the US signed a treaty that banned nuclear weapon tests in the atmosphere, under water or in outer space

The treaty is known as the Partial Test Ban Treaty, and is one of the most important peace treaties in the history of mankind. The treaty “ended” the Cold War. The “war” continued, but not in the same way as before, and there was a different approach to international relations. The treaty was initially signed by the US, the Soviet Union and the United Kingdom in Moscow on August 5, 1963. The US Senate ratified the treaty on September 24, 1963. Until today, more than 100 countries have signed and ratified the treaty, including nuclear heavy weights such as Iraq, Israel and Pakistan.

How the process began?

The signing of the treaty followed what were intense negotiations between representatives of both countries for eight years. The first attempt for negotiating a deal was initiated by the United Nations in May 1955, bringing together representatives from US, UK, France, Canada and the Soviet Union. The biggest issue during the negotiations was the “on-site inspections” for verifying underground testing. The Soviets feared that other countries and the United Nations could use those inspections for spying.

Despite those negotiations falling apart, John F. Kennedy was determined to end the Cold War. He supported ban on nuclear testing since 1956, as the president believed a treaty and ban like that could prevent countries from obtaining nuclear weapons. The ban was huge part of his 1960 campaign.

Kennedy met with Soviet premier Khrushchev in Vienna in June 1961. Many accused Kennedy that he showed weakness during the summit, and left an impression he is a weak leader.

The pressure was high again in August 1961. Two events preceded the pressure, as a poll in the US conducted in July showed that the public pressures Kennedy to resume nuclear weapon testing. In August, the Soviets resumed atmospheric testing and conducted more than 30 nuclear tests.

The effect of the Cuban Missile Crisis

The Cuban Missile Crisis put the highest pressure on the two leaders to sign the treaty. The Cuban Missile Crisis lasted for 13 days, but could have very easily escalated into a full time war. The Americans placed Jupiter ballistic missiles in Italy and Turkey, which were within range or Moscow and the Soviet territory. As a response, Russian leader Nikita Khrushchev agreed to the request of the Cubans, and placed nuclear missiles in Cuba. The Cuban missiles were just 90 miles from Florida, well within range. Kennedy and Khrushchev started negotiating, and they made an agreement that the Soviets will pull off the missiles, if the US publicly states they will never attack Cuba as well as dismantle the missiles in Italy and Turkey.

The Crisis showed just how close the US and the Soviets are to a war, and how easy things can escalate to a full time nuclear war. The Crisis was in October, and immediately afterwards, the two leaders discussed how they can prevent such crisis in the future.

Both Khrushchev and Kennedy agreed that two men and two countries should never be able to decide and bring an end to the civilization as we know it. As Kennedy put it during his commencement speech at American University, "If we cannot end our differences, at least we can help make the world a safe place for diversity." The Soviets broadcasted the speech with Russian translation, and was reprinted in the press.

Key Points from the treaty

Here are some of the key points and articles from the treaty.

Article 1 - Each of the Parties to this Treaty undertakes to prohibit, to prevent, and not to carry out any nuclear weapon test explosion, or any other nuclear explosion, at any place under its jurisdiction or control: in the atmosphere, in any other environment.

Article 4 - This Treaty shall be of unlimited duration. Each Party shall in exercising its national sovereignty have the right to withdraw from the Treaty if it decides that extraordinary events, related to the subject matter of this Treaty, have jeopardized the supreme interests of its country. It shall give notice of such withdrawal to all other Parties to the Treaty three months in advance.

IN WITNESS WHEREOF the undersigned, duly authorized, have signed this Treaty.

DONE in triplicate at the city of Moscow the fifth day of August, one thousand nine hundred and sixty-three.

According to many historians and professors in political manners, the Partial Nuclear Ban Test Treaty is arguably one of the most underrated and in the same time, greatest achievement by former president John. F. Kennedy. The treaty was a fundamental turning point of the Cold War, and an “act of greatness” by Kennedy. The Partial nuclear ban test treaty ended the most dangerous period of the Cold War, the Cuban Missile Crisis. The Cuban Missile Crisis had potential to start a war that could have escalated to World War III, with countries taking either the US or the Russian side.

The role of Kennedy in the treaty is often underestimated. The former president set the ground for signing the treaty in June, when he delivered one of the most powerful, and arguably most important speech of his life and career at American University’s commencement ceremonies. Just one month afterwards, the treaty was signed in Moscow between the governments. However, all the details were previously discussed between US President JFK and Russian Premier Nikita Sergeyevich Khrushchev. Kennedy also addressed the nation on National TV on July 26.