​The Giant Eye of Africa in Mauritania - Mystery viewed from space 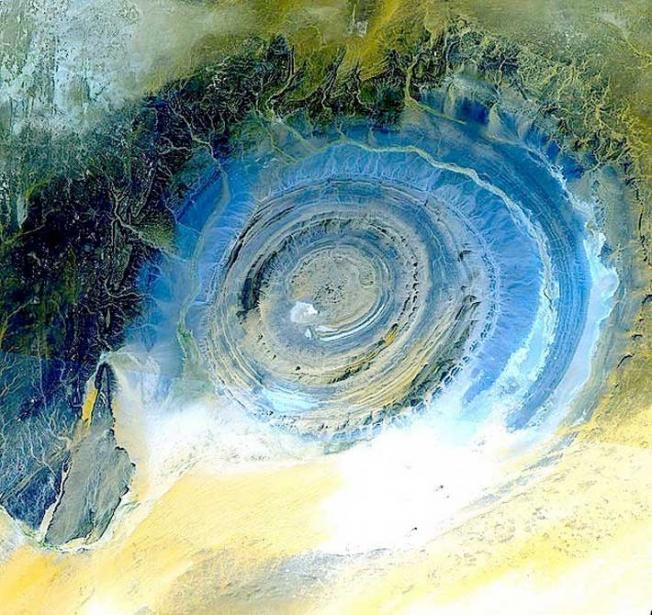 The common name for the landmark and circular feature with a diameter of 40km is The Richat Structure. However, everyone know the feature in Mauritania as the Giant Eye of Africa. Located in the Sahara Desert, the sedimentary rocks of the structure come from different eras, ranging from the age of Late Protrozoic to Ordovician sandstone.

Let’s try break down the structure of the circular feature known as the Giant Eye of Africa. The interior of the Richat Structure consists of extrusive and intrusive igneous rocks. The variety of rocks include: kimberlites, rhyolitic volcanic rocks (lava flows and hydrothermally rocks), carbonatites and gabbros.

In the northern part of the Giant Eye, scientists have found kimberlitic plug that is believed to be 99 million years old.

Aside from rocks, hydrothermal features are also part of the Giant Eye in the Sahara desert.

When it was first discovered, the Giant Eye of Africa was considered an asteroid impart structure. The reasoning behind the theory is that the high degree of circularity could be a result of an asteroid impact. However, nowadays, scientists argue that the feature is symmetrical and deeply eroded geological dome. A recent study argues that the carbonates in the Richat Structure were created by hydrothermal waters with low temperature. However, no matter what people believe, every scientist out there is certain in one thing: the Giant Eye of Africa needs protection and requires a deeper and more analytical research of its origin.

One of the theories regarding the Richat Structure is that it actually represents the lost city of Atlantis described by Plato in his works.

Plato described the mysterious island as a circular piece, divided into circles of both water and land. According to Plato, there were 3 circles of water and 2 circles of land. He positioned the Atlantis as a landmark lying in front of the Pillars of Hercule.

The Atlantis represents the power of the Ancient Athens, and is considered the land for Plato’s ideal state. In the story of Atlantis, Plato says that Athens was able to repel the attack from forces in the Atlantic ocean, and was the only nation in the Western (then known) world to do so. However, due to earthquakes, the island submerges into the Atlantic Ocean as Gods decide to leave the spot.

Plato also referenced a mountain sheltering the city. Coincidentally, a quick study of the area surrounding the Giant Eye shows high, mountainous ridge to the north.

The size of the formation, that it wasn’t until space pioneers noticed it while they were flying in the orbit over Africa.