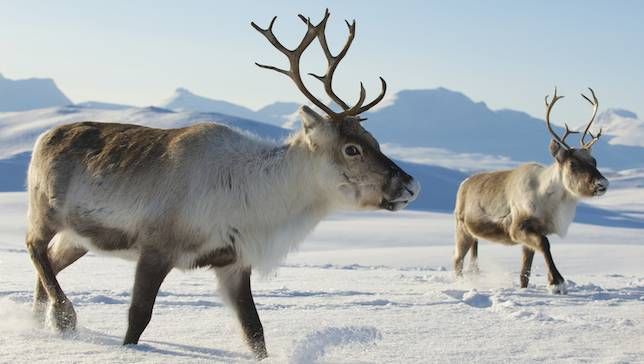 Did you know they are the only mammal that can see ultraviolet light? And how the connection to Santa was born?

Contrary to popular belief, reindeer are real, and they exist in the real world. They are not just fiction from children’s books and stories about Santa Claus. Rudolph, Santa’s reindeer is the most famous one. But beyond their sled-pulling capabilities, what else you know about reindeer? Did you know they are the only mammal that can see ultraviolet light? And how the connection to Santa was born? They were not always Santa’s favorite animals. That being said, let’s see some interesting facts about reindeer.

Essentially, these two are the same thing. The European reindeer and the American caribou were once considered different species. However, they are the same species, both belonging to the major group of reindeer. The species are only divided by the type of region they live in. One of them lives in the tundra, the others in the woodland. The reindeer and the caribou distinction might get more complicated in the future, as some of the species are becoming extinct. However, for now, they are one and the same species. The reindeer specie is divided into subspecies going from nine subspecies to thirteen, depending who is doing the classification.

Speaking of different naming and species, reindeer can go by many names. And all of them are appropriate. For example, the word Reindeer originates from an Old Norse word, which means “horned animal”. The word is “hreinin”. The caribou species, on the other hand, is named after a French word that means “snow shoveler”. The word references the reindeer habit of digging through the snow in search for food. Another origin for the word reindeer is found in the Iranian dictionary, a word that means “cattle”. And that is logical, since in the Iran area, reindeer were semi-domestic animals used for milk, fur, transportation and meat.

The sex is a complicated issue

The gender/sex of a reindeer can be tricky to find out. The thing is, unlike other deer species, even female reindeer can grow antlers. And that happens during certain times of the year. The best way to decide whether reindeer are male or female is to check the season. Male reindeer lose their antlers during spring and winter, while female reindeer lose theirs in the summer. Another key difference, female antlers are smaller than male antlers. And speaking of the gender, it is probable that Santa’s reindeer are female, since male lose their antlers during December/January. Imagine that, Rudolph might be a female.

No other mammal can see ultraviolet light. Reindeer have nearly as good vision as humans. For example, human vision cuts off at wavelengths of 400nm. Reindeer, on the other hand, can see up to 320nm, which helps them see things in glowing white of the Arctic like white fur and urine. The human eye, for example, cannot see these things in the snow.  The research showing that reindeer see ultraviolet light was conducted at the University College of London.

In the past, reindeer habituated the south part of globe. Nowadays, they are synonym for the northern point of the globe. But there was a time, in the Pleistocene era for example, during which reindeer populated the southern part of the globe. And during the 19th century, they still lived in Southern Idaho.

In Scandinavian countries, you can still find reindeer meat in grocery stores. And you can find it in fresh, dried, and even canned forms. During the Mesolithic and Neolithic period, reindeer were hunted, and helped civilizations survive. Reindeer meat is crucial part of the traditional dishes in Scandinavia. And yes, all of the organs are edible.

And in North America, Inuit people still use the reindeer for food, shelter, and clothing. But they do have rules and practices that limit the number of reindeer they can kill. There is a rule that prevents selling the meat.

The first time reindeer appeared in correlation with Santa was in 1823. Moore wrote the poem “A visit from Saint Nicholas), which was later translated to “The Night Before Christmas”. In the poem, Moore introduced Dasher, Dancer, Prancer, Vixen, Comet, Cupid, Dunder, and Blixem. The last two were later changed to Donner and Blitzen. And the last two mean “thunder” and “lighting”.

In 1939, Robert L. May continued the conjunction of reindeer and Santa in his children’s book “Rudolph the Red-Nosed Reindeer”.  That was the time Rudolph was born. His name means “famous wolf” in German.

When it comes to nutrition, few things can beat reindeer milk. Sadly, you cannot buy it, since it is illegal to hunt reindeer for milk and meat. But the nutrition value shows that reindeer milk has 22% butterfat and 10% protein. Just for comparison, cow’s milk has just 4% butterfat.

You can say that reindeer have “smart” feet. Because they cannot change from sandals to boots from summer to winter, they do something else. Humans can change our footwear, but reindeer cannot. So, they do the next best thing. In the summer, reindeer’s footpads are sponge-like in order to provide that traction for the soft tundra. And as the winter comes, their pads shrink and tighten. As a result, the hoof rim is exposed, and the reindeer can cut through ice and snow. This also allows reindeer to dig through the snow.

Social
Top 5 Most Intelligent Dogs
“Do dogs really think”, “can dogs communicate with us”, “how can we understand our dogs”?
Five Architecture Designs that will change future
Since 2008, Berlin in Germany gathers top architects for the World Architectural Festival. The annual event focuses most...
Where did all the animals go? Decline of Animal Species through numbers
In the past 50 years, the human population has gone from 3.3 billion, to 7.4 billion. In the same time, animal populatio...
New Animal Species Develop Thanks to Human Intervention
Some of the new species are hybrids, some of them thrive in human-dominated world, and some still enjoy the solitude of ...