Stu Ungar Story - The Champ Who Was and Could Have Been 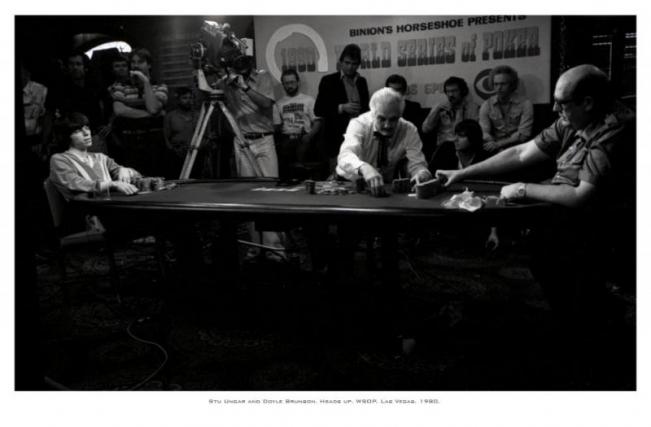 Poker world is full of incredible, great stories about people who made their dreams come true. After all, it is one of the reasons this widely popular game became a worldwide phenomenon, played by dozens of millions across the globe. But even in this realm filled with amazing stories, many of which have been turned into really interesting and often touching documentaries, very few come close to that of Stu Ungar. Even those who know it still read it in one breathe, and those who hear it the first time often have mixed emotions for this truly one-of-a-kind character. L:

Born on September 8 1953 in Manhattan, Stu was a son of a loan shark Isadore Ungar, known better by his nickname "Ido" who also owned a club "Foxes Corner". Not surprisingly, Stu became a part of the shady world of late nights and gambling at a very early age.

His natural talent for gin, the game of choice of that period, has quickly become apparent to everyone who played him or watched him play and his reputation was growing in the gambling circles.

After death of his father Stu, who was only thirteen at the time, was left to tend for himself, as his mother was seriously ill as well. With few options available to him, Ungar turned to one thing he knew how to do best: gambling. He spent next few years playing in the games around New York, successfully, but he was only at the start of what would be a great, short and tragic career. L:

When he was 18, Stu Ungar was introduced to Victor Romano, a crime boss and acclaimed card player. Recognizing and admiring Ungar's talent, Romano took him under his wing, and apparently, the two men quickly became very close.

With a great mathematical mind and natural flare for gambling, Ungar was able to defeat practically anyone who would dare to sit across him. However, nobody who knew him would describe Stu as a gracious winner. In fact, he was notorious for being very vocal about his opinion about his opponents' abilities and would very often criticized the what he perceived (most often correctly) as bad plays.

When it came down to competition, Stu was a born winner and losing was not one of acceptable scenarios for the young wizard (as he would certainly be called by his peers today). He became famous for his saying Show me a good loser and I'll just show you a loser. L:

If there was ever a man that you could apply a saying his reputation precedes him, Stu Ungar was that man in gin circles. After he defeated everyone and anyone who was bold or naive enough to take him on, the action dried out. Nobody wanted to mess with Ungar. It was a silent recognition of his dominance, but it also meant that he had to look for alternative sources of income. After all, Ungar was a professional gambler.

Since he moved to Las Vegas in 1977 and couldn't get any action after a while, with some casinos even not allowing him to play the tournaments, he turned his attention to poker. He entered his first World Series of Poker in 1980, having only played one Texas Hold'em tournament previous to that according to those who knew him.

Ungar proceeded to win, defeating Doyle Brunson heads-up for the title. This is when he came to be known as "The Kid" as he looked even younger than he really was. Veterans of the game could not believe what they were witnessing. But it was real.

Ungar returned the next year and successfully defended this title as the reigning world champion, winning another bracelet in Deuce to Seven Draw tournament just for a good measure. In 1983 he added yet another bracelet in a Seven Card Stud event. L:

Demise and a swan's song of "The Kid"

There was no man alive who would dare doubt Ungar's natural talent for cards. But his skills in other areas of life were rather lacking. He was addicted to pit games and sports betting and developed an addiction to cocaine about the time he started playing poker; the combination that would, as one could expect, prove fatal.

It first cost Ungar his family, as his wife Madeline divorced him after only four years, but not before they had a daughter and that fact was something that helped Stu hold on for as long as he had, but his demons eventually prevailed.

His love for pit games resulted in difficult financial situation. Poker winnings were not enough to cover losses at the gaming tables. It wasn't long before he could no longer afford to play and his physical health was deteriorating at the same time. Refusing to enter rehab, "The Kid" set down the path very few return from.

During the WSOP Main Event in 1990, he was found overdosed in his hotel room. At this point, many of his friends thought that the end was near as Ungar was clearly having a serious issue that he refused to deal with. Around that time, he pretty much disappeared from his usual circles and many thought that they'd never see "The Kid" at the tables again.

However, Ungar had strength for one more surprise and although it took him a while, he returned to the World Series in 1997. Worn out and basically broke, Stu was trying to find someone who would put him in the Main Event. At the last moment, Billy Baxter decided that he would give "The Kid" a chance and that decision would pay off handsomely a few days later.

Although Ungar struggled to make it through the first day, as he was clearly not feeling well, he returned the next day sharp as ever and proceeded to ride the wave all the way to an impressive victory. The media was on fire, fans were going crazy: "The Comeback Kid" returned from nowhere to seize the title as if it was nothing, earning $1,000,000 in the process.

It was a huge story. With this victory, Stu Ungar had amassed in excess of $2 million in WSOP winnings alone. His display during the Main Event of '97 reminded everybody of the old "Kid" and for a brief moment it seemed that Stu had beaten his demons and that he was ready to take the poker world by storm for a second time.

It was but a fleeting moment, however, as Ungar was back to being his old self very soon. Financial boost from the Main Event victory was probably his detriment as it enabled him easy access to all the things that caused his downfall first time around.

The next year, everybody was eager to see the reigning champ return to the tables and try to defend his title and potentially become a four-time Main Event winner. However, minutes before the start of the tournament, Ungar told Baxter, who was staking him to play again, that he wasn't feeling well enough to play.

Heavy drug abuse had finally caught up with "The Kid" and the end was imminent. Not long after, the money was all gone as well and, once again, Stu Ungar, the legend, the amazing "Comeback Kid", was completely broke, begging for money in various Las Vegas casinos, all of which was used to buy drugs.

As the year was coming to an end, so was Ungar's life. On November 20 1998, he checked into a room in a cheap motel and it was the last time anybody had seen him alive. Two days later, on November 22, he was found dead in his room, with nothing but $800 on his person. Of all the money he had won during his card playing days, which was in the dozens of millions region, three time world champion of poker and the best gin player the world has ever seen did not have even a $1,000 to his name. L:

Champions and ordinary people all end up in the same place when their time runs up. Ungar was buried at Palm Valley View Memorial Park in the same city where he achieved his poker fame. The man was gone but the legend remained.

Those who knew "The Kid" still tell the tales of his amazing, often borderline impossible card abilities. As with every legend, there is a mix of truth and fable in there, but there is no doubt that he was one of the greatest, if not the greatest, card players of his time.

Even today, people are often wondering what would be had Stu was able to beat his demons. How many poker bracelets he would claim by now? How many millions in winnings would "The Kid" amassed. Nobody can tell with certainty, but would Ungar be who he was without his demons? A person is sum of his parts and if you take a few of them out, even if they are the "evil parts", would you still be left with the same person?

Ungar's life and career have been a topic of numerous documentaries, like the one in this article, and movies, the most famous being High Roller: The Stu Ungar Story from 2003. If you haven't seen any of these, take some time out of your busy schedule and check it out; if you love gambling stories and colorful, intriguing characters, you will not be disappointed.