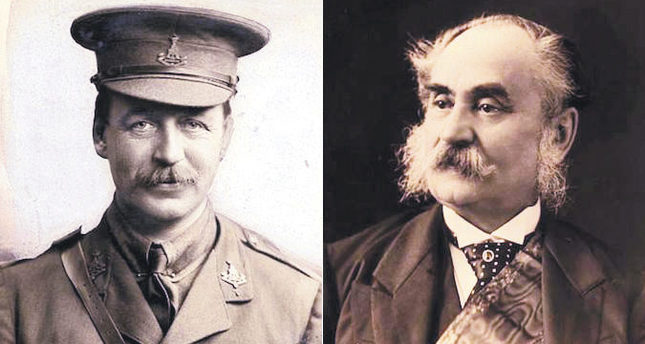 The Sykes-Picot agreement was a secret agreement back then, signed between France and the United Kingdom, with the Russian Empire backing it up. The trio of countries won the War, divided the countries, and nowadays we are feeling the consequences, 100 years later

100 years ago, the British and the French decided to divide their influence in the Middle East. The decision was made during the World War I, with the British and French forces confident they will emerge victorious and will later divide the areas occupied previously by the Ottoman empire. Two generals, colonel Mark Sykes from Britain and Marie Denis Georges-Picot, a French diplomat were tasked to create the agreement that is officially known as the Asia Minor Agreement.

The Sykes-Picot agreement was a secret agreement back then, signed between France and the United Kingdom, with the Russian Empire backing it up. The trio of countries won the War, divided the countries, and nowadays we are feeling the consequences, 100 years later.

According to the agreement, Britain was awarded influence the area between the Mediterranean Sea and the River Jordan, as well as southern Iraq. UK also got the ports of Acre and Haifa, allowing the United Kingdom access to the Mediterranean Sea. France was rewarded with control of Syria, Lebanon, northern Iraq, and southeastern Turkey.  According to the plan, Russia was supposed to get Istanbul, Armenia and the Turkish Straits. The goal for Britain was to protect their colony in India, and control the oil business in the Middle East. Russia, for her part, wanted control of Turkey because of border issues. France just wanted to get piece of the cake.

As we mentioned, Britain, and Mark Sykes for his part, had a simple goal in mind: protect India by setting a perimeter of states under British control in the Middle East. The plan failed when Picot noticed Britain’s intentions, and failed to surrender Palestine to the British.

The Sykes-Picot agreement was flawed from the very beginning. And that was even before the British Government understood in 1918 that Sykes actually surrendered the huge oil areas of northern Iraq to France.

Much of the conflicts in the area nowadays are result of the conflict between France and Britain. In order to get access to the oil fields, British started flirting with the Zionists. Britain got the support it wanted for Palestine, then occupied Mosul (despite promise not to after the war was over). British prime minister forced the hand of his French counterpart, and Britain got Mosul and Palestine. But it came with a price, as France got Syria.

The result? The Arab world was furious because the British awarded the French and the Zionists, and did not allow independence to the Arab countries.

Now, Sykes-Picot agreement is not fully to blame for the instability in the Middle East today. On the anniversary of the agreement, Time Magazine will conclude “It’s not as if borders carefully drawn by locals with greater sensitivity to ethnic, religious and linguistic differences could have secured a stable Middle East after the Ottomans. Could new borders ease today’s conflicts? We won’t find out soon, because no one in the region can agree where they should fall. Outsiders can play a role in forming a solution, but they can’t impose one”.

But the problem with ISIS, one among many, is that the organization is taking every little piece the Western World throws at them, and uses to their advantage. For example, on the anniversary of the Sykes-Picot, ISIS used a bulldozer to roll over the border between Syria and Iraq, showing the Western World that they will no longer tolerate the West setting the borders in the Middle East.

And then ISIS issued the following statement:

“One could list among the products of the Sykes-Picot agreement its nationalities, regimes, religions, and so on… The Islamic State and the World after Sykes-Picot Allah has safeguarded the Islamic State from falling into this polytheism, making it hold firm to the prophetic methodology and giving it certainty that the land will be inherited by those whom Allah selects of His righteous slaves. The principle is that all will be united under the rule of Allah, as the affairs will be managed by the one Muslim Imam, who is obeyed in virtue, and that all that lies outside this land, i.e. Dar al-Islam, is the land of disbelief and war. It is only befitting that Muslims leave such a land and come to Dar alIslam, as they must fight the disbelievers of that land, whose blood, wealth and honor are all permissible to take. By Allah’s grace, it did not deviate under the pressure exerted by the Crusaders and their taghut agents to isolate it in a narrow spot of land”.

According to ISIS, it was Allah who facilitated the jihad, the fight against the Sykes-Picot borders, sending mujahidin to fight and reject the attempts of the Western World to enforce borders in the Middle East.

“By Allah’s grace, the Islamic State unified the camp of faith, bringing Muslims together under one banner, just as the camp of disbelief unified, as various countries arose and gathered today to fight it, seeking a return to the world before the Khilafah’s return. By Allah’s permission, the coming days will witness more events that result in removing borders of Sykes-Picot and its like, that the world might be re-divided, but based on creed The Islamic State and the World after Sykes-Picot and not race, nation or tribe. At that time, each person will choose for himself what he seeks, whether the camp of faith, wherein there is no hypocrisy, or the camp of disbelief, wherein there is no faith”.

Failures of the Sykes-Picot

The biggest mistake the British made during the negotiations is they counted on the Arab nationalism to turn against Turkey. But what happened in the last few years is that Arabs turned against the Western World.

Sir Mark Sykes, as well as Britain in general, counted on the future growth of Arab nationalism, but thought they can use it to their advantage against Turkey and the Ottoman Empire. But in reality, the opposite happened. Sunni, Kurds, Shiite, Islamists, and other groups are reaching back to their old identities.

During the past 60 years, a total of 23 conflicts occurred as a direct result of the Sykes-Picot agreement. These conflicts include the war between Iranian Shiites and Iraqi Sunnis, a war that resulted with more than a million casualties. The Arab Spring, as well as the War in Syria are also largely influenced by the Sykes-Picot agreement. The Arab War against Jews started as a local conflict, but escalated to something much worse. The Middle East has become a boiling area, and conflicts breeding ground, all due to the weakness of the agreement that Britain and France signed 100 years ago.

But the worst aspect of the agreement is that France and Britain have taken a back seat in the Middle East rather subtle. They’ve allowed Americans to take charge, and control what happens. In a way, it is the best evidence for Britain and France acknowledging they failed, and now letting someone else to try and fix the mess.

For example, Europe, led by France and Britain failed to save the Christians in the Middle East. Europe has never taken the lead in negotiations and failed to propose rational peace plan for the Arab-Israeli War. In fact, it is America who dictates what happens. Neither Britain, nor France actively participated in the peace conference in Geneva in 1974 and Madrid in 1991. Europe, as a whole was absent from the draft of the peace treaties with Jordan and Egypt.

The latest example of Europe failing to recognize and take the blame for its failures is the Syrian refugee crisis. Many will point to the fact that it was Americans that helped the formation of ISIS, but the root of the problem is much deeper, and it goes back to the Sykes-Picot agreement. The Palestinian refugee problem started in 1948, with the first Arab-Israeli war, and it has not been resolved yet. And the Syrian refugee crisis was one of the major factors in Brexit. The solution to the problem is far in hindsight, and the Sykes-Picot is to blame.