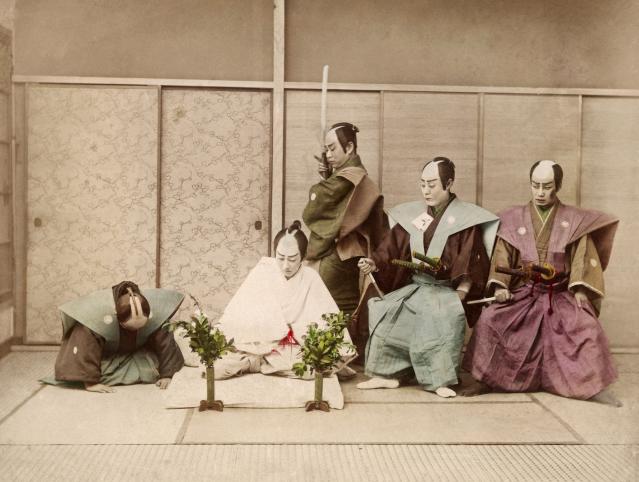 For starters, the word literally translates to “stomach cutting”. And in its most basic form, the ritual is a honorable suicide

The ritual of killing yourself was a noble tradition in Japan. There was a time the Western world thought Seppuku was a barbaric ritual. But all that changed with the writings of British diplomats Ernest Satow and Algernon Mitford during the late 19th century. These two witnessed incidents of judiciary seppuku and wrote about it. They called the ritual a noble act, and even deemed it as act of chivalry.

The ritual, called hara-kiri as well, is a ritualistic suicide by disembowelment practiced by samurai warriors in feudal Japan. But that is what most people know about it. There are many things people do not know about the ritual. Therefore, let’s try to get the hang of it.

For starters, the word literally translates to “stomach cutting”. And in its most basic form, the ritual is a honorable suicide. The samurai warriors stabs himself in the gut, makes some slicing motions, and dies from blood loss or trauma. The ritual has been around for hundreds of years, but it is not practiced anymore. Here are five things you need to know about the ritual.

You could not do it alone

While the ritual was a suicide, it was extremely challenging to do it on your own. In movies and comics, the ritual is shown as a samurai sitting in silence and solitude, and then stabbing himself with a katana (the samurai sword). But that is not accurate.

In reality, the stabbing is just the first part of the ritual. The ritual finishes after your assistant, decapitates you. After cutting your abdomen, your spirit is free and released from your body. You are still alive and in excruciating pain. Your assistant, or “kaishakunin” as the Japanese call it is someone you trust, because he needs to decapitate you.

One had to be a master swordsman to perform the ritual

Proper seppuku is a complex ritual. It is not something you can easily do it. As mentioned previously, for starters, you couldn’t do it on your own. But the complex way of performing the ritual sometimes took days to plan, and hours to perform. The process begins with choosing the assistant that will carry out the decapitation. The assistant can decline the offer, only on the ground he is not a master swordsman and that his sword technique is inadequate. The assistant needs to remove the head in one clean stroke. However, in the same time, the assistant must leave a small flap of skin at the front of the neck so that it prevents runaway heads.

Stabbing was complex as well

The ritual of stabbing required three distinct motions. The gut slitting is the symbolic part. The act required specific technique, one that people had to master before they perform the ritual. The first motion is to insert the blade into the side of the belly close to the ribs. The side the performer chooses depends on the dominant sword hand. Then, one has to draw sharply across the gut to disembowel oneself followed by rotating the knife and yanking it up. The end is spilling everything out.

One has to have a high tolerance to pain to perform the ritual. Most of us will crumble out of the pain after the initial slicing.

Seppuku is not a male-only act

There is evidence that there were women samurai as well. But in most cases, the samurai was a male-dominant and male-only profession. However, that does not mean that seppuku was a male-only ritual. Women performed it as well. The female method of suicide was called “jigai”, and was executed a bit different.

Women in Japan had to perform suicide after being dishonored as well. For example, if you were raped, or your husband was dead, or you lost your home.

The ritual begins with binding the body together in a specific pose with rope. This is done to prevent an ugly death. Remember, Japanese women had to be beautiful at all times, even at their death and suicide. Once properly bound, women had to take a sharp knife and slit the artery on the neck in one stroke.

Yukio Mishima’s seppuku was seen as an embarrassment

Yukio Mishima was a famous novelist, poet, director, and actor. He committed a ritual suicide in 1970. And while in feudal Japan, seppuku was seen as an honorable act, Mishima’s suicide was seen as an embarrassment to the nation. People characterized it as an anachronistic act. In 2001, Isao Inokuma performed a seppku as well, and it was seen as an anomaly.

Mishima performed the suicide ritual along with his followers in 1970 while advocating for a political revolution. They invaded a general’s office, barricaded themselves in, and appeared on a balcony to give a speech on the post-war constitution. The problem was, most people liked the constitution, and he was ashamed. He marched back into the office and committed the suicide. The problem was the friend who had to cut his head missed four times, and had to be replaced by someone else. The failed decapitator committed suicide next to Mishima.