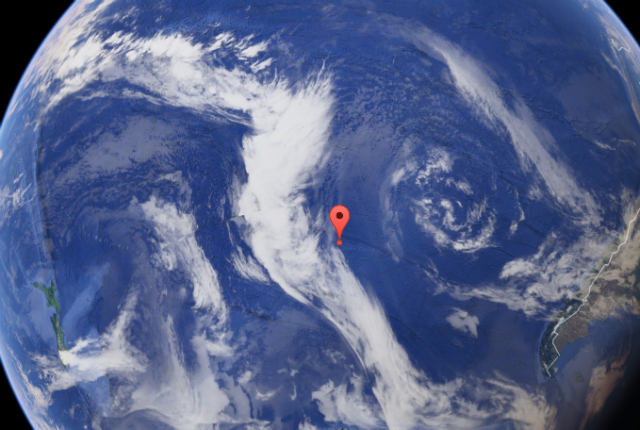 Called “one thousand and four hundred miles from anywhere”, the point of inaccessibility was discovered in 1992 by a Croatian-Canadian survey engineer. Hrvoje Lukatela wanted to find the place furthest from land, so he used a 3D model and a geospatial computer program to find the place. And no, it is not called after the Disney movie “Finding Nemo”. Although, that would be awesome, as Hrvoje actually found Nemo.

His logic was that because Earth is three dimensional, the most remote ocean point should be located in a point that is same distance away from the three nearest coastlines. Lukatela gave the name Nemo to the point, as a tribute to Captain Nemo, a fictional character in the novel “Twenty thousand leagues under the sea” by Jules Verne.

What is Point Nemo?

Ducie Island is a small atoll with only two kilometers diameter. The crew of Pandora was the first European crew to visit the Island. Motu Nui is just 100 meters across of Easter Island. The first European to visit was Jakob Roggeveen on Easter of 1722. A 20 kilometer wide volcanic island, Motu Nui is known for the giant stone monolith statutes on the coastline. Finally, Maher island is another small island which is connected to the Antarctica by the Getz Ice Shelf.

Here are some interesting facts about Point Nemo:

- The land close to the point, or Ducie Island is non-inhabited, and by the time you get to Nemo, you’d wish you never bothered

- If you somehow pass Point Nemo, you’ll closer to the International Space Station by 400km in space, which is closer than human will ever be

- In Latin, the name Nemo translates to “no-man”, which is basically what the area is

Point Nemo is known also as “South Pacific Ocean Uninhabited Area” to space agencies. For years, Point Nemo has been used as a dumping ground. Some of the agencies using Nemo as dumping ground are Russian, Japanese and European agencies. The reason is because the point has fewest human inhabitants and the quietest shipping routes.

By now, more than a hundred decommissioned spacecraft have been dumped into the area. Satellites, cargo ships, and even space stations have found their way to Nemo.

Small fragments of space parts burn up in the atmosphere. However, parts like fuel tanks, pressure vehicles and other parts of the fuel system can survive the atmospheric re-entry. These end up in the ocean, and Point Nemo is the perfect place for dumping. Experts calm that there is no hazard to the aquatic level. Since there is no residual fuel that leaks out, these space parts are safe for the aquatic life. And the fun part is, similar as shipwrecks, space parts also create habitats that can be colonized by sea creatures. For years, there have been rumors about what lives inside Point Nemo, but nothing has been proven yet.