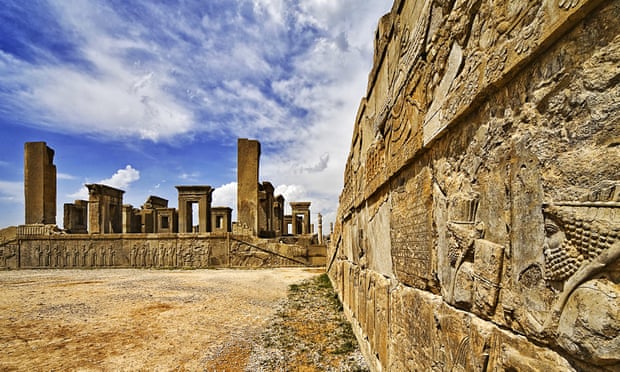 Persepolis was the capital of the Persian Achaemenid Empire, starting from the reign of Darius I, until its destruction in 330 BCE. The name comes from the Greek Persespolis (Persian city). Persians knew it as Parsa, which translates to City of the Persians

Persepolis is the jewel in Iran’s archeological crown. It is a monumental complex dating back to the sixth century BC. It was designed to impress with its vast raised terrace, grand staircases, and marble palaces. Persepolis was sacked several times by different visitors, starting with Alexander the Great.

Persepolis was the capital of the Persian Achaemenid Empire, starting from the reign of Darius I, until its destruction in 330 BCE. The name comes from the Greek Persespolis (Persian city). Persians knew it as Parsa, which translates to City of the Persians.

The city was located in a remote region in the mountains. That made travel difficult during the rainy season of the Persian winter. Therefore, the administration of the empire was also located in Babylon and Susa. The city was mostly a spring/summer royal residence. Judging by the remains, it was a ceremonial center where representatives came to pay respect to the king.

Today, looking at the architecture, you can understand the supremacy. Buildings like Imperial Treasury and Apadana Palaca mesmerize visitors. Nowadays, even modern buildings follow the architecture and use it as a model. For example, the Ministry of Foreign Affairs in Tehran.

The city remained an important site until it was sacked and looted by Alexander the Great in 330 BCE.

There were nine structures in the city. Those included the Apadana Palace, Trachara (the palace of Darius I), council hall, treasure, throne hall, palace of Xerxes I, harem of Xerxes I, Gate of All Nations, and Tomb of the King.

Three were built by Darius, who also began building the treasure. The others were built by his successors, most notably his son Xerxes I and grandson Artaxerxes I. In addition to these nine buildings, the site also included residential buildings and marketplace.

The location of the city was a secret for the outside world. It became the safest city in the Empire for storing art, artifacts, and treasure. The Greeks had no idea of the city until Alexander the Great sacked it. The ruins lay buried until the 17th century when they were identified as the royal city of Persepolis. Professional excavation began in 1931.

Function of the City

The function of Persepolis remains unclear to this day. It was not the largest city. It appears it served as a grand ceremonial complex. The secrecy made it a popular place for storing valuables. The city was occupied only seasonally. Archeologists have no idea where the king’s private quarters were.

One theory is that the city was used for celebrating Nowruz. That is the Persian New Year, held every spring equinox. It remains an important festivity in modern Iran.

The site is now under the protection of UNESCO. There are three criteria why the site is protected.

The first criterion is the terrace of Persepolis, with the double flight of access stairs and walls covered by sculptured friezes.

The second is the ensemble of majestic approaches, monumental stairways, and throne rooms. The Annex buildings of the city are classified among the world’s greatest archeological sites. They bear witness to a unique quality of ancient civilization.

And last, the palace of Persepolis, which continues to be the image of the AChaemenid monarchy itself.

You might be wondering why the ancient ruins are one of the greatest wonders of the Ancient World. Well, the site is a world of ancient mystery. While there are sites in Iran dating back over 7000 years, far more than Persepolis, the site is still the number one tourist destination.

The city might be a mere shadow of its former glory. But you can still see the grand staircases and the Tachara Palace, which is the oldest palace on the site. They are among the most intact parts.

Persepolis is a symbol of Iran, and the grandeur of the city is embedded in the psyche of Iranian people. For them, it is not just ruins of a forgotten empire. Instead, the site is the place where the Cyrus Cylinder, the first charter of human rights that expressed tolerance and quality for all races and religions was recorded. The Cyrus Cylinder is now in the British Museum.

Despite the negative attention Iran receives, the city remains a reminder of the most powerful empire. And it is a source of pride for Iranians who remember that they are descendants of great leaders. Their place in birth of ancient civilizations cannot be ignored.

Art
Understanding the Mandela Effect – How do we Create False Memories?
This effect occurs when a large group of people believe an event occurred when it did not. There are many examples in po...
Byzantine Style – Features and Best Examples
Mosaics were the signature characteristic of Byzantine architecture and Byzantine style. These mosaics illustrated relig...
Seven Things You Need to Know about the most famous Gothic Novel
That novel set the benchmark for all other writers of the vampire afterward. But how much do you know about the original...
How much Do You Know about Circus?
Most people associate the term circus with Great Britain. After all, it was in UK that circuses gained popularity during...