Night of Broken Glass – The Beginning of the Holocaust 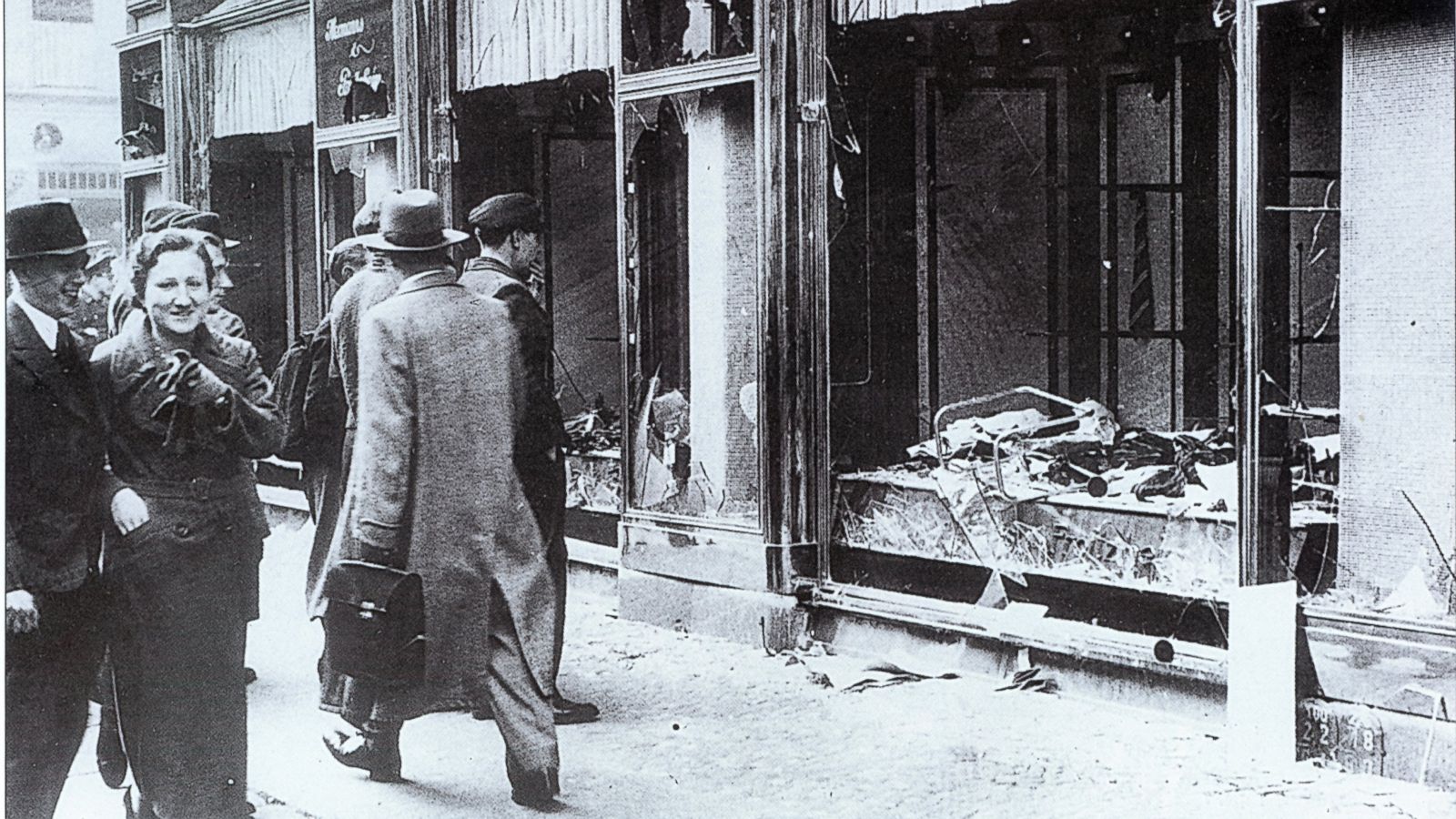 More than 7,000 Jewish businesses were destroyed, and 30,000 Jews were arrested and sent to concentration camps

Kristallnacht, or better known as the Night of Broken Glass, was a pogrom against Jews carried out by SA paramilitary forces and civilians in Nazi Germany. It occurred on the night of November 9th, and lasted until November 10. Many consider it the beginning of the Holocaust.

During the event, German authorities looked on without intervening. The name comes from the shards of broken glass that littered the streets after smashing of Jewish-owned stores, buildings, and synagogues.

Attackers demolished buildings with sledgehammers, with rioters destroying 267 synagogues throughout Germany, Austria, and the Sudetenland. More than 7,000 Jewish businesses were destroyed, and 30,000 Jews were arrested and sent to concentration camps.

Background of the Holocaust in Germany

In the 1920s, German Jews were fully integrated into German society. They were considered German citizens. Jews served in the army, navy, and contributed to every field of business in Germany, including science and culture.

But after the appointment of Adolf Hitler as Chancellor of Germany, conditions started to change. Hitler fully assumed power with the Enabling Act and the Reichstag fire. He quickly introduced anti-Jewish policies. The laws restricted the rights of German Jews to earn a living, enjoy full citizenship, but also gain education.

Some of the infamous laws include the Law for the Restoration of the Professional Civil Service in April 1933, and the 1935 Nuremberg Laws. These stripped German Jews of their citizenship and prohibited them from marrying non-Jewish Germans.

Effectively, the laws excluded Jews from German social and political life. Many Jews started looking for asylum abroad, hundreds of thousands emigrated, but the world quickly became closed for them. They either couldn’t enter the states, or couldn’t live there.

By the time the Evian Conference took place in the summer of 1938, more than 250,000 Jews had fled Germany and Austria. And by the end of the year, Germany entered a new radical phase of its anti-Semitic activity.

There is evidence of planning violence against Jews dating back to 1937. According to many historians, the goal and motive of the pogrom was to seize Jewish property and businesses.

In August 1938, German authorities announced that residence permits for foreigners were being canceled and would have to be renewed. That included German-born Jews. Poland, at the same time, stated it would renounce citizenship rights of Poland Jews living abroad. Effectvely, this made more than 12,000 Jews homeless. They were ordered to leave their homes in a single night, and allowed only one suitcase per person.

Their remaining possessions were seized as loot by both Nazi authorities and by neighbors. Among the families that were expelled, was the family of Sendel and Riva Grynszpan, Polish Jews living in Germany since 1911.

On the morning of Monday, 7th November 1938, their son Herschel, purchased a revolver and went to the German embassy. He wanted to talk with an official, and was taken to the office of Erns vom Rath, a professional diplomat with the Foreign Office. Grynszpan shot hi, and then confessed the shooting to the police.

Key Dates Leading up to the Night of Broken Glass

October 28, 1938, About 17,000 Polish Jews are expelled by Germany and forced across the border with Poland. But Poland refuses to allow them to enter, putting the Jews in a no-man’s land.

November 7, 1938, German diplomat got shot in Paris, by a 17-year old Polish Jew living in Paris.

November 12, 1938, Nazis fine Jewish community, imposing a fine of $400,000,000 on the community in Germany. Jews are ordered to clean up and make repairs after the pogrom.

The Night of Broken Glass

On the night of November 9, 1938, following Goebbels speech, violence against Jews broke out across the Reich. It appeared to be unplanned, set off by German anger over the assassination of German official in Paris. But in fact, Joseph Goebbels and other Nazis carefully organized the pogroms. In two days, more than 250 synagogues were burned, and more than 7,000 Jewish businesses were trashed and looted.

Dozens of Jewish people got killed, and Jewish homes were looted. All while police and fire brigades stood by and watched Germans trash Jews.

The morning after the pogroms, 30,000 Jewish men were arrested for the crime of being Jewish and sent to concentration camps.

Following the Night of Broken Glass, life was even more difficult for German and Austrian Jewish children and teenagers. They were banned from entering museums, public playgrounds, swimming pools, schools, and every part of Germany.

Former German Kaiser Wilhelm II, commented that “for the first time, I am ashamed to be German”. Following the Night of Broken Glass, Hitler sent orders requesting that the Jewish question be now, once and for all, coordinated and solved one way or another.

At the time, there were different views for the Jewish question within the Nazi party. For example, Goring wanted expropriating the Jews, not destroying Jewish property. He viewed Jews and their businesses as valuable assets.

After November 9, 1938, persecution and economic damage continued against German Jews. They were forced to pay a collective fine of one billion marks, close to $400 million, for the murder of von Rath. In today’s currency, that would equal up to $5.5 billion.

The number of emigrating Jews surged. Ten months later, more than 115,000 Jews emigrated from the Reich. The majority went to other European countries, and more than 14,000 made it to China.

Nazis seized houses property, shops, and everything that Jews left behind.

But Kristallnacht spared international outrage. A line had been crossed, and Germany left the community of civilized nations. It led to eventual decline in support of the Nazi regime. Many newspapers condemned Kristallnacht, comparing it to the murderous pogroms incited by Imperial Russia during the 1880s.

The US recalled its ambassador from Germany, and many other governments severed diplomatic relations with Germany in protest.

To put it simply, the Night of Broken Glass changed the nature of the Nazi persecution of Jews from economic, political, and social, to physical with beatings and murder. Nowadays, the event is referred to as the beginning of the Holocaust.

It foreshadowed the genocide to come. It is a critical step of a stage where each step becomes the seed of the next.

But the vent also served as instrumental in changing global opinion. In the US, the event served as the specific incident to symbolize Nazism and as the reason for the anti-Nazi movement. Following the Kristallnacht, Nazis became associated with evil.