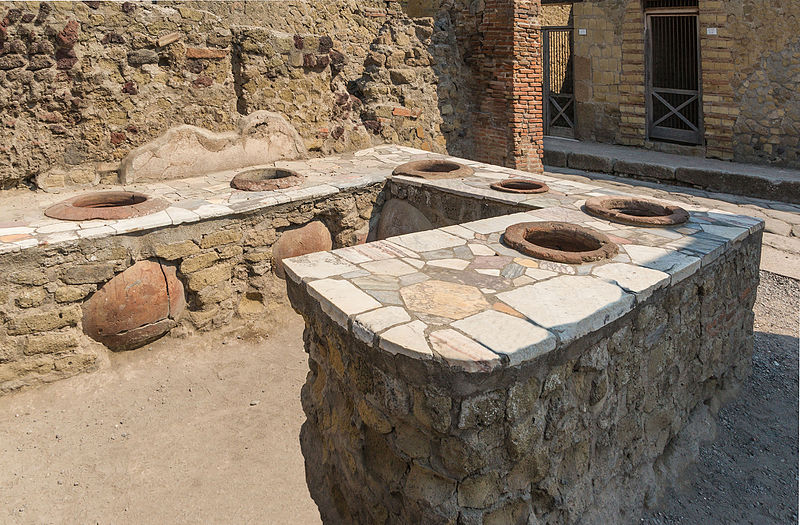 An ancient form of a take-out restaurant, the thermopolium was an outdoor service counter that offered ready to eat food

In 2013, a new British Museum exhibition in London titled “Life and Death in Pompeii and Herculaneum” gave us a great new extraordinary insight into the diet of the ancient Romans. What we didn’t know before was that back in Ancient Rome, take-out food was a real possibility. Romans could get those in a thermopolium.

Pompeii is one of the cities in Ancient Rome most famous for its thermopolium, or thermopolia

Pompeii was buried under meters of ash and pumice after the eruption of Mount Vesuvius in 79 AD. The preserved site has been subject of archeological research for many years. What archeologists have found is there are many “thermopolia” in Pompeii.

The object is a shop, or a bar, believed to be used for selling food. The thermopolia consist of a terracotta container sunk into a masonry counter. Nowadays, you can order take-out food with just one click of a button. Poor people in Ancient Rome did not cook. It was unusual for poor people to cook at home. Many of them would take their food to the baker, who would cook for them in the oven. Another common option was to purchase food from the local thermopolium.

An ancient form of a take-out restaurant, the thermopolium was an outdoor service counter that offered ready to eat food. The word literally translates to a “place where something hot is sold”. Thanks to archeological studies and research, we know there are more than 150 of thermopolium in Pompeii.

It is unknown what poor people could order, but many assume it included some sort of a tomato-free soup, pickles, ham, fish, and eggs.

The architectural design as mentioned is rather simple, a small room with a stone counter at the front, in which several terracotta jars were placed. These jars were called Dolia. The jar was rarely used for storing hot food, as the process of cleaning would have been awkward afterwards. They were used for storing dried food.

Here is a description of the take-out food of Pompeii by Mary Beard, a classics professor at Cambridge University:

“The best way to escape a diet of bread, cheese, and fruit, eaten in small lodgings over a shop of workshop, where there were limited or no facilities for cooking anything more interesting, was to eat out. Pompeii has long been thought of as a cheap café culture, with bars, taverns, and thermopolia lining the streets, catching the passing trade, from visitors with time on their hands to local residents with nowhere nice of their own to be”

The bread of Pompeii

The 2013 exhibition also showed how the bread looked back in Roman times. Different cities have different ideas about what daily bread should be like. For example, in Paris, that is the baguette. In Moscow, that is a heavy boule of rye. In Pompeii, the daily bread is a circle of bread made from sifted white flour. One item that was shown during the 2013 exhibition was a loaf of bread. It was baked 2000 years ago, and the baker left his stamp, “Celer, slave of Quintus Granius Verus”. The load is round and plump, similar to cake, and divided into eight wedges.

History
Weird History of Dog Poop – The Secret Ingredient in Victorian Leather
Back in Victorian Britain, there was a job title called “pure finder”. The name is ironic, since workers didn’t fi...
Weirdest and Most Brutal Ways of Torture in History
From crucifixion, to playing, boiled alive, or tortured by rats, we take a look at brutal ways of torture
Opium Wars – How they Defined Relations Between China and Europe
The opium wars, fought between Britain and France, and China, were a period of humiliation for the Chinese. They resulte...
Weird Facts about Tiramisu – The Italian Delight
Tiramisu is a coffee-flavored Italian dessert. Made of ladyfingers dipped in coffee, and then layered with a whipped mix...