Kuelap, Peru - The Other Machu Picchu in Peru you can visit 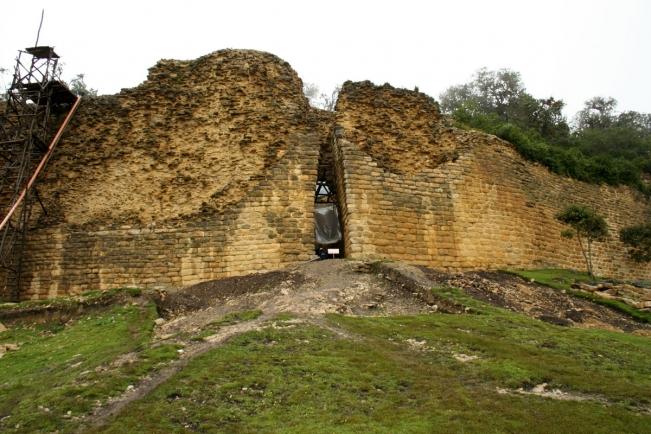 Kuelap is a city in Northern Peru, a fortress that is the largest stone structure in South America. The belief is that the city was built to serve as defense for hostile attackers

When you think of Peru and tourist attractions, Machu Picchu is the first thing that comes to mind. However, some 100 plus years ago, Kuelap was discovered, and it has evolved into the second most popular attraction in the country. Kuelap might not have the secrets and mysteries of Machu Picchu, but it is still a site that is worth visiting. Kuelap is a fortress built around 800 AD, Kuelap was one home to the Chachapoyan people. They were known as “cloud warriors” in the time of the Incas.

The fortress of Kuelap is the largest stone structure in South America. It is associated with the Chachapoyas culture. The fortress consists of a walled city, surrounded by exterior stone walls. There are around 400 buildings within the complex that is situated on a ridge. Kuelap is located in north Peru, which is one of the reasons it is called “The Machu Picchu of the North. The fortress is around 600 meters in length and 110 meters in width.

Archeologists believe the fortress was built for defense against hostile attackers. The complex was occupied by the Incas until the Early Colonial period. Kuelap was discovered in 1843. Before the Columbian period, there were only four written references to the city and the fortress.

The fortress itself contains 450 stone houses. The mountain on which the fortress is located is higher than the one of Machu Picchu.

The Structure of the City

In order to appreciate the greatness of the city and the fortress, you must think of the time it was built. And then, simply look at the structure and be amazed. The city is now in ruins, located at the summit of a hill. To get to the lost city, you must go to El Tingo first, a town that is located on 1800m above the sea level.

The city itself, and the fortress, are situated at 3000 meters above the sea. The walls rise up to 19 meters in height, and the city is 600 meters in length.

Within the complex, there are levels of platforms and those flat elevations support the construction of more than 400 buildings. Most of the buildings in the city are cylindrical, and in most cases, only the base remains. The walls in the houses are decorated with friezes of symbols.

There are three structures in the city that stand out. Those are the “El Tintero”, a circular turret located in the southern end of one of the biggest platforms in the city. The turret has the shape of an inverted cone, which is a challenge for the laws of gravity. The second structure is “La Atalaya”, another turret structure. And the last one is “El Castilo”, a structure located on the top of an platform.

There are three portals to access the first level of the city. Two are placed on the East side, while the last one is located on the Western Wall.

Kuelap – The fortress of Celts and Carthaginians

There are some theories that Carthaginians took refuge in South America, and Kuelap was one of their fortresses. In the documentary “Secrets of the Dead, Carthage’s Lost Warriors”, Professor Hans Giffhorns says that the Carthaginians flee the Roman Empire and took refuge in Kuelap. According to his theory, people from the Old World traveled to Peru and other countries and joined forces with the Chachapoya. In the documentary, the professor stresses that Celtic Iberians and Carthaginians could have also lived in the ancient city of Kuelap. He even believes that the dead people of Kuelap are descendants of the Carthaginians and the Celts.

The city of Kuelap is not easy to get to. The city is off the tourist path largely due to the inaccessibility to the city. However, that is about to change in the next years, as the Peruvian government has given a 20 years grant for a cable car system. The system should allow tourists and visitors easier path to the spectacular fortress and city.

The cable car system should be operational in 2016. At the beginning, there will be 26 cars, each of which can carry up to 10 passengers. The goal is to make the cable car system able to carry 1000 passengers every hour. Kuelap is an intriguing part of the North in Peru, and the government intends to capitalize on that.

Facts to Vow You

- Three thousand people would have lived in the city, working as farmers, artisans and builders (bear in mind the population back in the days, when cities had around one or two thousand citizens).

- The walls of the city thrust 20m in height. They are constructed from limestone slabs that are arranged in geometric patterns. The largest stone is 2m thick.

- The city is the largest stone monuments of the New World, located on the slope of the Andes, somewhere around 3000 meters above sea level.