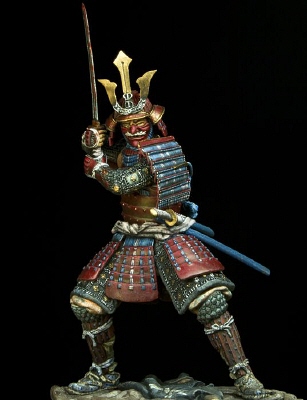 Samurai were noble warriors fighting evil and defending the country and lived by their moral code, the "bushido"

Samurai are the most well-known class of people in Ancient Japan. The legend of Samurai goes so far, that even Hollywood made a movie about it. Samurai were noble warriors fighting evil and defending the country. Their armor and sword were sacred, and they lived by a strict moral code. The code, named “bushido” governed their entire life. The translation of the term is “the way of the warrior”. Here are seven facts you need to know about the Samurai.

There were female Samurai

The difference between male and female Samurai was in the weapon of choice. Men used a sword, while female warriors used naginata, a spear that had curved blade.

The armor was all about practicality

The first thing you think about the armor when you see it is that it is heavy. And the truth is that the Japanese traditional armor was heavy and fierce. However, the weird-looking armor was built for practicality. It remains one of the most functional and practical armor of all military history.

The armor of the Samurai was designed for mobility. The armor was sturdy, yet flexible enough to allow free movement. Made of lacquered plates of leather or metal, the plates were carefully bound together by laces of silk or leather. Samurai had their arms protected by large and rectangular shoulder shields. The right hand had no sleeve, allowing maximum movement.

The helmet had a purpose as well. Made of riveted metal plates, the most important feature of the helmeted was the neck guard. The helmet defended the Samurai from arrows and swords coming from all angles. As for cultural references, Darth Vader’s helmet was inspired by the Samurai helmet.

The common misconception about the Samurai is that they were a rare elite force. People think of them in the same spirit as Navy Seals of today. But they are not a small, tightly defined caste of noblemen. In fact, Samurai composed an entire social class.

The term “samurai” actually means “those who serve in close attendance to the nobility”. Over time, the term evolved and became associated with the bushi class. At the peak of its popularity and power, Samurai composed 10% of Japan’s population. At the end of their era in the 1870s, they composed 5% of the Japanese population.

The Samurai warriors had several weapons. But the katana is the most famous one. Originally, they carried a sword called “chokuto”. The chokuto was a smaller version of the straight sword medieval knights carried.

As their technique evolved, samurai switched to curved swords, and the katana was born. According to their code, the bushido”, the Samurai’s soul was in his katana. They also carried a smaller sword called “wakizashi”. The set was called “daisho”, which translates to big and small set.

But they had many more weapons at their disposal. Samurai also used a longbow, spears, and even firearms and cannons once gunpowder was introduced.

As for the katana, the Samurai tested the blade by hanging dead enemies from a tree and then make 16 systematic cuts through the body.

They were highly educated

The term warriors usually refers to people that are brave, and great in combat, but not so good in education. But Samurai were highly educated warriors. They were literate, and they could read at a time when few Europeans could read. They were skilled in mathematics, and also studied calligraphy, flower arrangement, and literature.

Their code, bushido, dictated that they should better themselves in a multitude of ways, not just combat. Some of the activities they participated in included monochrome ink painting, tea ceremony, rock gardens, and poetry classes.

As mentioned, Samurai lived entirely by their moral code. When a Samurai warrior was dishonest, he had to regain his reputation and honor. One way to do that was perform ritual seppuku, or “hari-kiri”. The gruesome act included a ritualistic suicide, in which the samurai cuts his head off.

The whole process starts with a ceremonial bath, and then dressing in white robes. The samurai is given his favorite meal. Once he is done eating, the samurai is presented with a blade on an empty plate. He needs to write a death poem, expressing his final words, and once the poem is finished, he grabs his blade, wraps a cloth around it, and then performs a suicide. While cutting his head, a samurai must leave a small strip of flesh in the front. This ensures the head will fall forward, not fly at the spectators, which causes eternal shame.

Samurai warriors also performed seppuku at the battlefield so that they are not captured. This seppuku included a samurai piercing his stomach with a short blade moving it from left to right. Then, a friend will decapitate the disemboweled samurai so that he has quick death.

Back in their time, the Samurai warriors were trend-setters. They influenced style in Japan, and all around the world. Their clothing was designed to fit their needs. The regular Samurai outfit included wide hakama trousers, kimono, or a two part vest leaving the arms free. The vest could be easily removed in case of a surprise attack.

The most distinctive part of their fashion and style was the topknot hairstyle. And we see the man bun has survived even today.