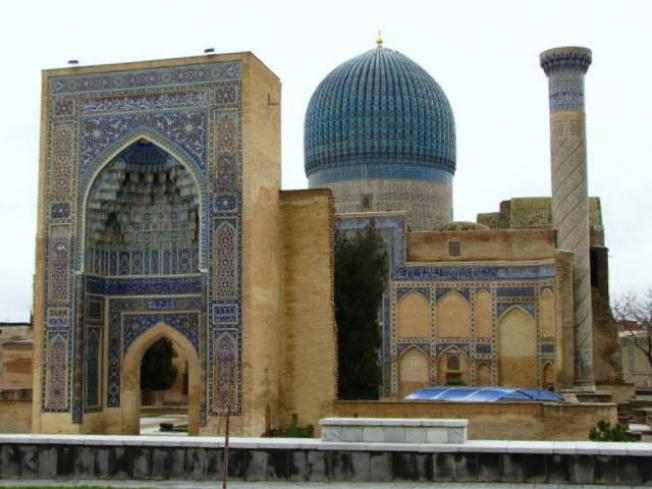 Timur was one of the most ruthless invaders in the history of mankind. He assumed the title of Great Khan in 1369, and he immediately started a campaign to make the Mongol empire as big as it was during the reign of Genghis Kahn. One of the most horrific actions of Timur is the pyramid he built in North India. Timur built the pyramid out of 70,000 human skulls. According to historians, Timur was tired of carrying the skulls around, so he decided to use them for a “good cause”

Timur, or commonly known as Tamerlane was one of the best military tacticians during the 14th century in Asia. He was also responsible for the death of around 17 million people. He lived for 68 years, building the biggest dynasty after Genghis Khan. His tomb represents and important piece of the history and culture of the Persian-Mongolian architecture. The tomb, or the mausoleum where Timur lies is the precursor for later architectural tombs. Even the Taj Mahal in Agra is built according to some of the principles of the Timur Tomb. But one thing that other tombs do not have, and Timur’s have, is a curse that allegedly changed the course of World War II. The curse changed the course not once, but twice during the worst war in the history of mankind. Here is how.

As mentioned, Timur’s Tomb or Guri Amur as they know it in Asia, is the mausoleum of the conqueror Tameline (Timur). The tomb is located in Uzbekistan and architects have built tombs according to its structure years later. Some of the popular tombs that are built upon the model of Timur’s Tomb are the Hamayun’s Tomb and the Taj Mahal. Today, only the foundation of the tomb, the entrance portal and one of the four minarets remain to serve as a reminder of Timur.

Timur was one of the most ruthless invaders in the history of mankind. He assumed the title of Great Khan in 1369, and he immediately started a campaign to make the Mongol empire as big as it was during the reign of Genghis Kahn. One of the most horrific actions of Timur is the pyramid he built in North India. Timur built the pyramid out of 70,000 human skulls. According to historians, Timur was tired of carrying the skulls around, so he decided to use them for a “good cause”.

The biggest mistake Timur made was to try and conquer China. At the time, China was ruled by the Ming Dynasty. The mistake was that Timur tried to conquer one of the biggest countries in the world during winter. It was very unlikely for him, as his normal conquest were during the spring, when his Mongols were best used and utilized. He faced one of the coldest winters in 1405, fell ill and eventually died before accomplishing his wish to conquer China. Timur died at 68 years old.

Important Inscriptions on the Tomb

As we mentioned previously, Timur’s Tomb is engraved with two inscriptions that contribute to the myth and legend of the curse.

The first inscription is written on the tombstone, and says “When I Rise From the Dead, The World Shall Tremble”.

The second one is located inside the tomb, and says “Whosoever Disturbs My Tomb Will Unleash an Invader More Terrible than I’.

The “curse” Timur’s Tomb changed the course of the War two times, the first time when Stalin opened it, and the second when he returned the remains to the tomb.

Stalin ordered anthropologist and historian Mikhail Gerasimov to open the Timur’s Tomb in 1941. At the time, Gerasimov was a known and popular anthropologist famous for reconstructing a face from a skull. His job was to do that with Timur’s skull, and Mikhail succeeded. Soviets opened the Tomb on June 20, 1942. The tomb was immediately filed with odor of camphor, resin, rose and frankincense. Research showed that the odor was coming from the oils used for embalming. Two days after the Soviets opened the Tomb, Hitler and Nazis invaded Russia. The invasion came without formal declaration of War. The operation was known as “Operation Barbarossa”. It is worth noting that three elder men warned Gerasimov and the Soviets that the Tomb is cursed and something might happen. The men told the Soviets that the curse takes effect after 3 days. The Soviet Union suffered numerous defeats at the hand of Hitler. And even though the Nazi were far from conquering Russia, they made progress.

Then, after few months, Stalin started believing in the curse, and ordered that the remains of Timur be returned to the Tomb. Stalin ordered that the process is done with full Islamic burial rights. The Soviets returned the remains to the tomb in December 1942. Nearly a month later, the Nazi surrendered and Stalin won the Battle of Stalingrad. The battle remains as one of the bloodiest in the history of mankind, not just the World War II.