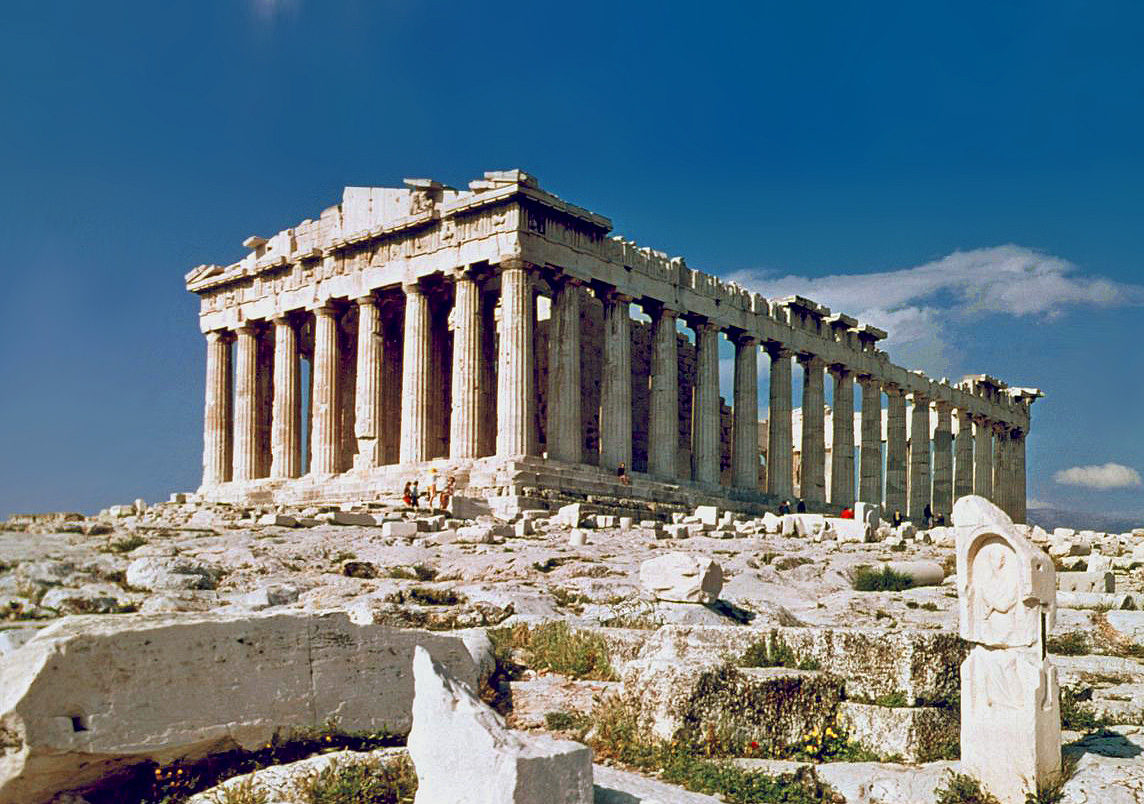 When you think of a structure that is easily recognizable as “Greek structure”, you think of the temple. It is worth noting that temples in Greece were diverse, and there were several different type of temples built. The form, shape and structure of the temples depended architectural order, be it Doric, Ionic, or Corinthian.

The earliest temples were built from mud brick and wood, and were used to honor divinities. As you probably know, Greeks believed in many divinities, not in just one God. The first, and most simple temple was rectangular room with projecting walls, and as a result, a shallow porch emerged. This basic structure remained unchanged for several centuries. It was in the eight century B.C.E. that Greeks started changing their materials from wood and mud bricks, to stones.

At this point, the Doric order of architecture became firmly established. The modern image of Greek temples, the one that we have today embedded in our minds is influenced by the Doric order. Some of the popular examples include the ruins in Sicily and Southern Italy. The Parthenon in Athens is also done in Doric order architecture. And we know that the Parthenon is one of the most famous temples of Greek times. During this period, multi-phase architecture development also began.

To understand the other orders of architecture in Greece, we need to mention their main characteristics. The Doric order, which we already mentioned, features columns with no base, no simple capital, and a frieze constructed by alternating metopes and triglyphs. The Ionic order, on the other hand, has columns with bases, with a scrolled capital, and a solid frieze. The Corinthian order features slender columns, with an elaborate capital on top and ornately sculpted friezes. Capitals are usually stylized in the shape of acanthus leaves, and you can see many decorative moldings all the way of the columns.

Cultural life and socializing was a huge aspect of life in Ancient Greece, and for that, the Greeks had theaters. Nowadays, most of the theaters are of closed type. But back in Ancient Greece, theaters were large and open-air structures. They were used for dramatic performances, be it concerts, or theater performances. Theaters utilized the panoramic landscape. In Ancient Greece, the theater was composed of three parts: the seating area, the circular space where the chorus was able to perform, and the stage. The composition of the theater was done in tiers, so the spectators are able to see.

During the Roman era, the theater underwent a few modifications of the architecture, but the essence stayed the same.

One of the most important buildings in Ancient Greece, after the temple, was the Bouleuterion. This was a civic building, serving as the meeting place for the citizen council. Some cities hosted up to 500 members. The term bouleuterion comes directly from the term “boule”, which is a citizen council. The representatives of the boule gathered in the civic building and discussed public affairs.

Most common shape of the civic building was rectilinear, with the top covered, and a stepped seating compound. The central speaker was surrounded by seats, so everyone can hear what the speaker was saying.

Ancient Greece is the birthplace of the Olympics, so it is only natural that the birthplace of the Stadium, the place where the Olympics happened is also Greece. Fun fact: measurements of modern stadiums are very close to those of Greek stadiums. The word “stadium” is directly derived from the word “stadion”, a measurement that is equivalent to 578 feet. Before the Olympic games, the Greek stadium was the location for foot races. It is funny that stadiums were often found in sanctuaries, as they were home for sacred games back then. As you see, religion played a huge role in the Olympic games.

Another aspect of the sports architecture that influenced modern architecture is the gymnasium, the training center for athletes, as well as the palaestra, an exercise facility for wrestlers.

Nowadays, we place fountains in our house as a way for decorating the garden. But back in Ancient Greece, fountain house were more than just a decoration, they were public buildings that provided access to clean drinking water. People from the city came at the public space and filled jars and containers with water.

There was a tendency fountains to be placed at the center of the agora, a public space that served as market. And despite Greeks being the ones that “invented democracy”, gathering water was seen as a woman’s task. Nowadays, it would be sexist to think that only women should gather water. Back then, gathering water gave women a way to socialize.

One of the most influential Greek architectural elements was the colonnade. The colonnade heavily influenced later architecture. In simple terms, a colonnade is a row of columns supporting a roof. In some cases, colonnades supported a different entablature. Colonnades can be attached to a building, but also be free-standing.

Greek architects figured out a way to best use colonnades, turning them into a “stoa”, a long and covered colonnade. Stoas were used as public gathering space, and they were extremely long, open on three sides, with the back always walled in. In time, Greek city planners found a way to utilize the stoa for marketplace.

One of the greatest songs ever written is Bohemian Rhapsody. And that is a fact. The single is now the third best-selling single of all time in the United Kingdom. Bohemian R...