George recognized that rock oil, a liquid that oozed from rocks, could actually be used as an illuminant. He and his business partner James Townsend found a way to extract the liquid in sufficient quantities, allowing them to compete with the whale fat and coat oils that were at the time being used in lamps

Nowadays, people refer to George Bissell as the father of the American oil industry. He is widely regarded as five of the most influential people in the history of the oil business. He was the spark that ignited the inevitable march of oil from a relatively unimportant liquid to the most important resource on Earth.
George recognized that rock oil, a liquid that oozed from rocks, could actually be used as an illuminant. He and his business partner James Townsend found a way to extract the liquid in sufficient quantities, allowing them to compete with the whale fat and coat oils that were at the time being used in lamps.
He founded the Pennsylvania Rock Oil company, which completely changed the way we drill oil. At the time, oil was mined, but the company decided the best way for extracting was to use the same drilling technique developed to bore for salt.

Let’s talk about the early life of the oil pioneer. Bissell was born in Hanover, New Hampshire. His father Isaac Bissell was a fur trader in Detroit and a Revolutionary War soldier. His mother, also had a history of war family. Her father, George’s grandfather, was John Wemple, a Revolutionary War Captain.
He got his education at Dartmouth College, paying his way by teaching and writing newspaper articles. Bissell graduated in 1845, studying literature and languages. As you can see, those majors had nothing to do with his later career. After graduating, he continued to earn living as a teacher at Norwich Academy. He also traveled and worked as a journalist.
At one point, he settled in New Orleans, Louisiana, where he worked as a high school principal and superintendent of schools.
For the next few years, he studied law in his spare time. Then, in 1853, he moved to New York City and became a practicing attorney. That is where he discovered oil.

How he discovered oil

In the same 1853, when he was working as a practicing journey, he visited Hanover. There, he met with Professor Oliver Hubbard and Dr. Dixi Crosby. They showed him a substance with which they were experimenting. Hubbard and Crosby called it “rock oil”.

At the time, it was primarily used as a medicine, but the professors believed it could be obtained more readily. That would allow to be refined and used as a source of light, a cleaner fuel than whale or coal oil.
The problem was they didn’t know how to extract it from the earth. Bissell, on his part, was instantly intrigued and immediately began learning what he could about methods used to obtain rock oil.
Then, in 1854, he and his law partner purchased land in an oil-producing region in Pennsylvania. There, they formed the Pennsylvania Rock Oil Company.
In the first two years, the company failed in all its attempts to extract oil. It was then that Bissell decided to try derrick drilling, a method used for obtaining salt.
When he first proposed the idea, it was met with ridicule. But he persisted, and three years later, the company struck oil and proved the method to be effective.
This is why people call him the Father of the Petroleum Industry. He was the one who turned petroleum into a commercial product.

One such group came from New Haven, Connecticut, which eventually formed the Seneca Oil Company. Bissell and his partner Eveleth had a royalty dispute with the investors, but a business relationship resulted.
The company struck oil for the first time on August 27, 1859, on a farm in Titusville, Pennsylvania. Fun fact: John D. Rockefeller took notice of the event and decided to jump on the opportunity and joined the Pennsylvania oil rush, forming his own business with Maurice B. Clark.
By 1882, Rockefeller would effectively establish a monopoly over the industry in Pennsylvania with the formation of the Standard Oil Trust.
With the discovery of oil in other states, the interest would shift elsewhere. But the legacy of George Bissell lives on. He was the one who changed the way how we extract oil and believed in his method. 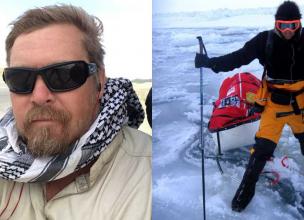 Personal Triumphs
Karl Bushby and the Goliath Expedition
Karl began his journey on 1 November 1998, and originally expected to finish the 36,000 miles journey trek in eight year...
March on Rome – How Mussolini Helped Hitler
100 years later, and we can argue that without the March on Rome, Hitler’s rise to power might never have happened. We...
Justinian I – Who was the Man we Thank for Today’s Laws?
Justinian I tasked himself with collecting and codifying existing laws and legal works from the Roman world, and ordered...
Mikhail Gorbachev – Achievements and Failures
Mikhail Gorbachev was the last Soviet Leader. He passed away on August 30, 2022, in Moscow, Russia. In 1990, he won the ...