Gateway to Hell in Turkmenistan – Will we See the End of It? 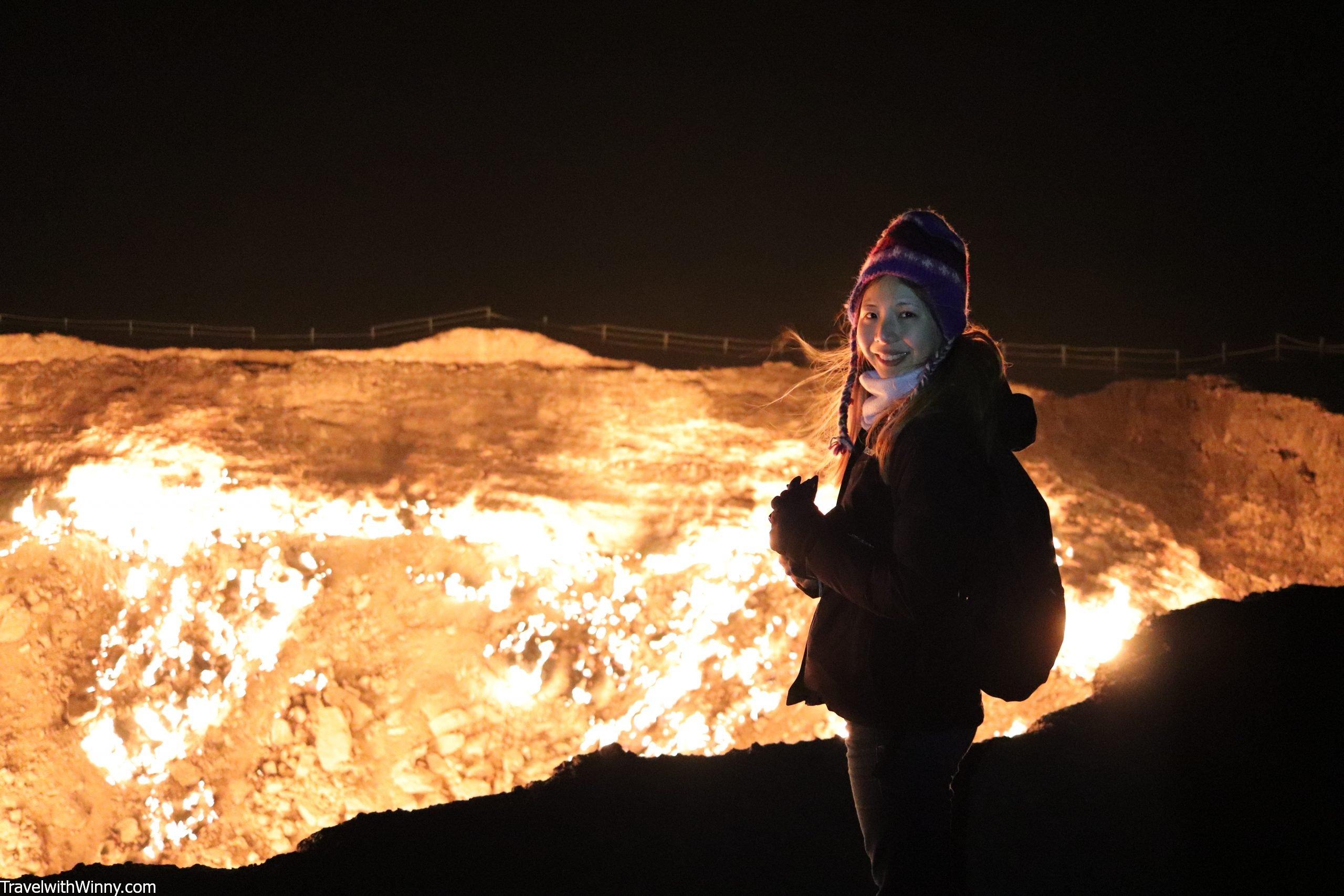 The original name of this place is Darvaza gas crater. Turkmen media uses the name Shining of the Karakum. But the common name most people know is the Door to Hell or Gates to Hell. The area is a natural gas field collapsed into a cavern near Darvaza, Turkmenistan

The original name of this place is Darvaza gas crater. Turkmen media uses the name Shining of the Karakum. But the common name most people know is the Door to Hell or Gates to Hell. The area is a natural gas field collapsed into a cavern near Darvaza, Turkmenistan.
There are no accurate records of how the crater ignited. Some facts are disputed. But the popular theory is that Soviet geologists intentionally set it on fire in 1971 to prevent the spread of methane gas. And it is thought to have been burning continuously ever since. 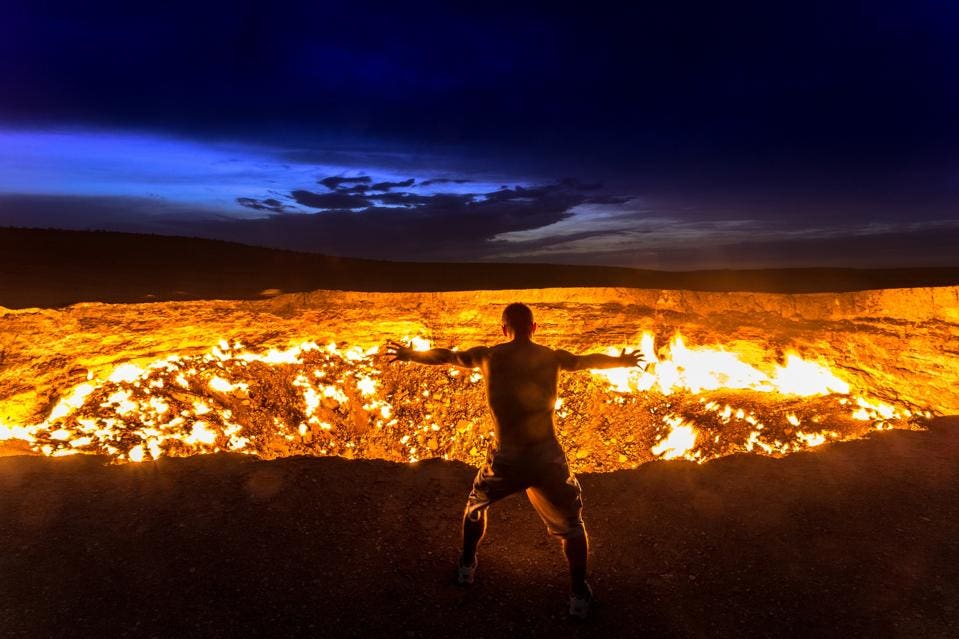 Nowadays, the crater has become a popular tourist attraction. The area around the Gates to Hell is popular for wild desert camping.
There are reports that the president of Turkmenistan wants to shut it down. Will that happen? Let’s talk a bit about the history and facts of the Doro to Hell.

History of the Gates to Hell

Turkmen geologist Anataoly Bushmakin is one of the historians of the place. He says that the site was identified by Soviet engineers in 1971. It was originally thought to be a substantial oil field site.
The engineers set up a drilling rig and operations to assess the quantity of oil available at the site. But soon after the preliminary survey found a natural gas pocket, the ground beneath the drilling rig and camp collapsed into a wide crater. The rig was buried with no casualties.
Expecting dangerous releases of poisonous gases from the cavern into nearby towns the engineers considered it advisable to burn the gas off. It was estimated that the gas would burn out within a few weeks, but it has instead continued to burn for more than 50 years and is expected to keep on burning.

The early years of the history are uncertain. Local geologists say that the collapse into a crater happened in the 1960s. According to their theory, the gases were not set on fire until the 1980s.
But there are no records available of either the Soviet or Turkmen version of events.
In April 2010, the President of Turkmenistan, Gurbanguly Berdimuhamedow, visited the site and ordered that the hole should be closed. In 2013, he declared the part of the Karakum Desert with the crater a nature reserve. In 2019, he appeared on state television doing doughnuts around the crater to disprove and correct rumors of his death.
The crater was part of a National Geographic Channel Series “Dye Trying”, with the episode titled Crater of Fire releasing on July 16, 2014. Explorer George Kourounis became the first person to set foot at the bottom.

Fascinating Facts about the Gates to Hell

Size of a football field
One of the reasons why the crater is so popular as a tourist attraction, is the size. More than 50,000 tourists have visited the site in the past 10 years. It has a total area of 5,350 m2, which is the size of an American football field.
Largest Gas Reserve in the World
We said that the gas crater is near the Darvaza village. Located in the middle of the Karakum Desert, the gas reserve is one of the largest in the world.
Locals gave it the nickname
Locals gave the nickname Door to Hell to the field. It refers to the fire, boiling mud, and orange flames in the large crater.
Gas was expected to burn for only a few weeks
Originally, engineers thought it is best to burn the gas off. They estimated that will last for a few weeks. But four decades later, the fire still burns within the crater.

Will we see the End of It?

In January 2022, a commission was tasked to find a solution for extinguishing the burning gas crater in Darvaza. The commission hopes to either extinguish the Darvaza gas crater altogether, or find a way for the crater to still burn without encompassing negative impacts on the nearby environment.
The president of Turkmenistan, Gurbanguly Berdimuhamedow, stated his concern regarding environment and economy. He ordered the government to set the fire down. 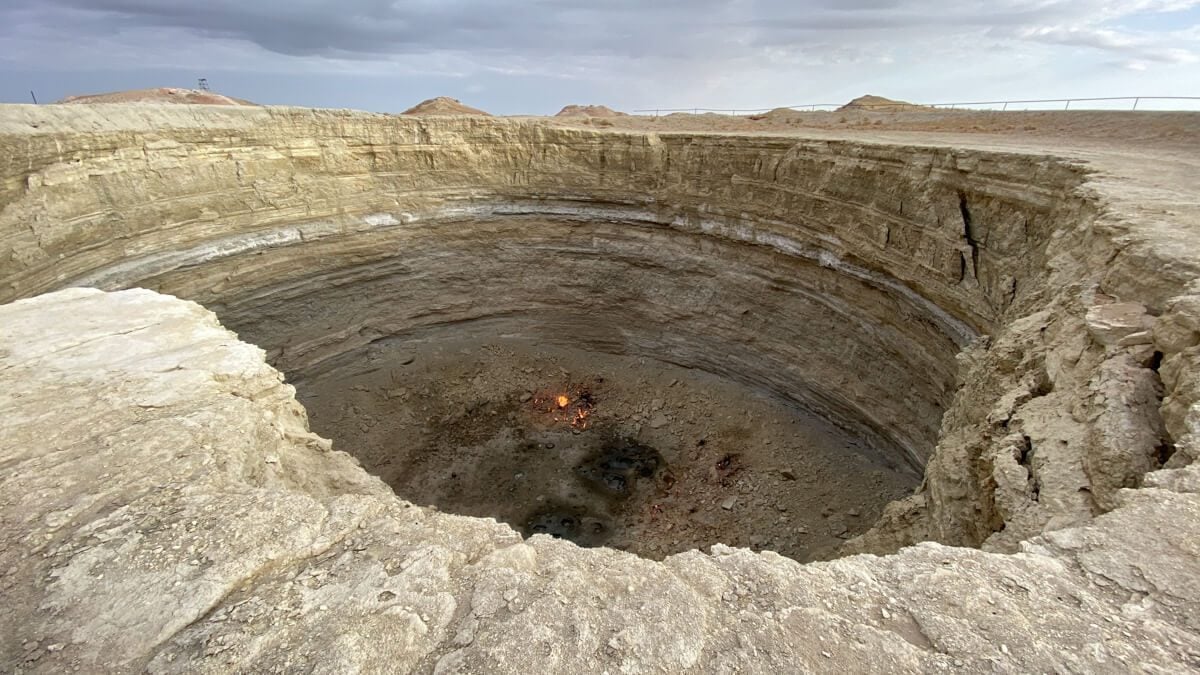 Back in 2010, Berdimuhamedow, ordered the experts to find a way to stop the fire. But that hasn’t happened since.
The Turkmen president says that the “fire made by human hand has bad influence on the environment and health of the people living nearby.

In this episode of Mystery Places, we travel to the richest country in the world, visit a mind-blowing hotel in Italy, and visit the USA in Germany.We also check out a chicken-shap...

44:18
Conspiracy
How Does Vampire Folklore Differ Around The World?

The legend of blood sucking vampires has captured peoples’ imagination for generations. A crack team of archaeologists and forensic scientists have uncovered hard evidence for th...

07:32
Conspiracy
Inside a Neo Nazi Music Festival | Decade of Hate

Music festivals, like most cultural events, were badly affected by the coronavirus pandemic, impacting both the smallest of DIY festivals to behemoths like Glastonbury.And this was...