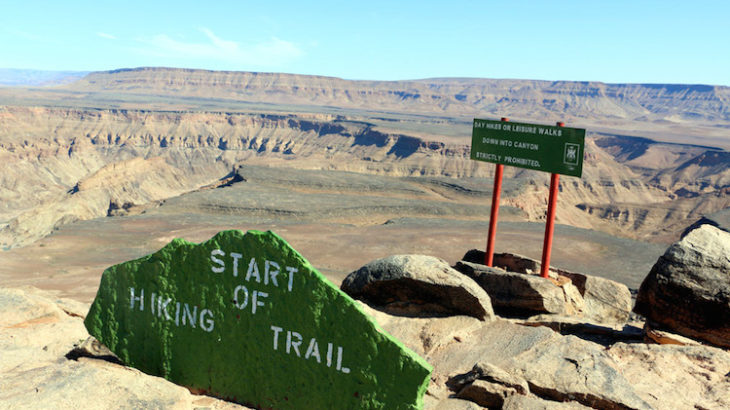 The Fish River Canyon consists of an upper canyon and a lower canyon. In the upper canyon, river erosion was inhibited by hard gneiss bedrocks. On the other hand, the lower canyon formed after erosion had finally worn through the gneisses. Both parts were declared a national monument in 1962

The Fish River Canyon, located in the south of Namibia, is the second largest canyon in the world, second only to the Grand Canyon. Usually, people know only of the first, but in this case, the second largest canyon is quite popular as well.
With a total length of 160km, maximum width of 27km, and a maximum depth of nearly 550m, the canyon is awe-inspiring and breath-taking.
The Fish River Canyon is the largest one in Africa. It river, the Fish River is the longest interior river in Namibia and cuts down into the plateau which is total dry.

Geology of the Canyon

The Fish River Canyon consists of an upper canyon and a lower canyon. In the upper canyon, river erosion was inhibited by hard gneiss bedrocks. On the other hand, the lower canyon formed after erosion had finally worn through the gneisses. Both parts were declared a national monument in 1962. Upstream, the river runs through horizontal dolomite strata. These metamorphic rocks formed part of the canyon. According to geologists, about 650 million years ago, plate movement formed a north-south graben, or a lowered area, along which the ancient Fish River could flow and eventually erode a plat plain.
This is what we call today the upper canyon. Glaciation at ground 300 Mya, part of the Dyka glaciation during the Karoo Ice Age, further deepened the canyon.
Around 60 Mya, South America and Africa separated and Africa rose significantly, which increased gradient of the Fish River and enabled it to erode the lower canyon into the hard gneisses.

Location of the Canyon

As we said before, the Fish River Canyon is located in the south of Namibia. The enormous canyon is locally known as Visrivier Kuil or Visrivier Canyon.
There are no large towns in the area, but there are some holiday resorts nearby. Some 70km or 45 miles to the north, there is a campsite referred to as Hobas. This is the closest you can get before accessing the canyon.
Popular hiking trail
The Fish River canyon features one of the most popular hiking trails in southern Africa. It is one of the best ways to explore and discover the canyon. The Fish River Canyon Hiking Trail is considered one of the most popular trails and provides the ultimate hiking experience.

The visitors start after just a short descent of 2km from the Hobas camping site. After that, it follows the river for a total distance of 88km through rugged terrain.
While the trail features some footpaths, there are a lot of areas without it as well. To complete it, it takes around 5 days.
Yet, hiking is not possible throughout the year. The area is prone to heavy showers that results in canyon flooding. Combine that with the hot temperatures and you have a big challenge. Hiking permits are issued between May 1 and September 15 of every year.
The canyon is home to the annual Ultra Marathon, which is 100km long. The lite version has a total distance of 65km.

Comparing to the Grand Canyon, it is a quite smaller. We said Fish River Canyon is more than 160km in length and 27km across at its widest point.

Now, the Grand Canyon is 446km long and 1800m deep, but with a similar width to the Fish River Canyon.
There is one area where the Namibian wonder prevails. It stretches across a whopping 5900 square km. It is far more than the American rival.

Besides hiking, there are a lot of other activities you can do at the canyon. You can try the helicopter tour for a beautiful views. Or you can walk to a few viewpoints that are in the beginning.

Nature is the highlight of the canyon, and the breathtaking views come from everywhere in the canyon.
Besides the common hiking trail, there is a challenging trek as well. Known as the Lowenfish hiking trail, it is one without hardly any water and large sections are exposed. But it is one designed for tourists who want to walk in the wilderness on landscape untouched by people.
Last, but not least, you can go on a horse riding trail. Half a day ride will get you close to the rim. 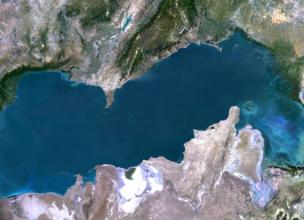 Nature
Caspian Sea – Largest Lake in the World
The Caspian Sea covers 143,550 square miles and has a volume of 19,000 cubic miles. Stretching for nearly 750 miles from...
Namib Desert – World’s Oldest Desert
The Namib is a coastal desert in Southern Africa. There are many reasons why people fall in love with this particular de...
Enchanted Well in Brazil – A remarkable remote natural wonder
Lit by direct sunlight between 10:30 and 12:30, the well is a somewhat of a miracle. The direct sunlight allows a breath...
Amazon Rainforest –8 Things You Probably Didn’t know
The biggest rainforest in the world is two and a half million square miles big. It stretches over nine Lain American cou...