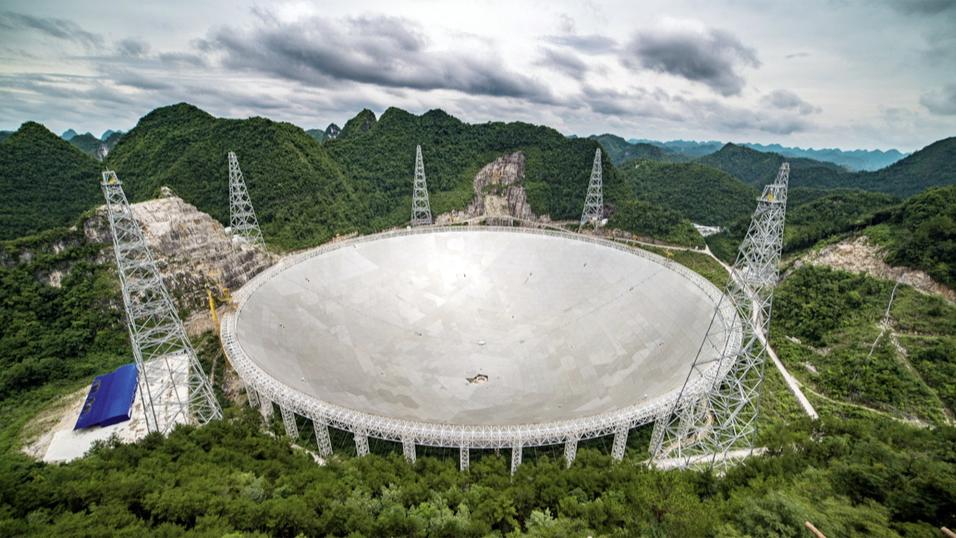 Apart from the obligatory extraterrestrial life hunting, the telescope will also become handy in a number of different ways, for example, detecting low-frequency gravitational ways and discovering brand new information about the universe

FAST was finished in 2016 and is currently at early-research stages. China plans to open it to researches around the world. Located at a very radio-quiet region 1,240 miles southwest of Beijing, it has up ten times the potential to discover signals produced by distant, alien civilizations. It might even help locate an alien homeworld.
Apart from the obligatory extraterrestrial life hunting, the telescope will also become handy in a number of different ways, for example, detecting low-frequency gravitational ways and discovering brand new information about the universe.
The massive, 1,650-foot-wide satellite dish and the accompanying research facilities cost $180 million and consists of 4,450 individual parts. If you want to put it into perspective, it is roughly as big as 30 football fields.
The Five-hundred-meter Aperture Spherical radio Telescope, or FAST, is a radio telescope located in the Dawodang depression, a natural basin in Pingtang Country, southwest China.
It has a novel design, using an active surface made of 4,500 panels to form a moving parabola of metal panels in real time. 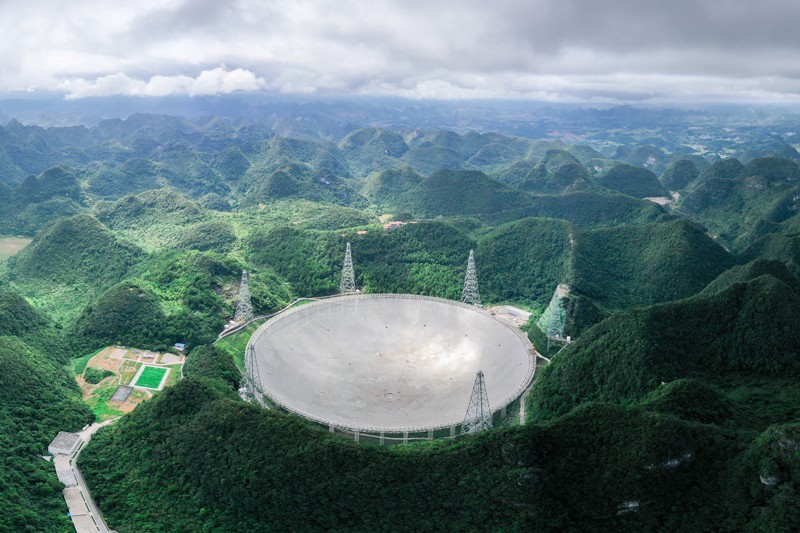 Construction of FAST began in 2011. It observed first light in September 2016, and after three years of testing and commissioning, it was declared fully operational on January 11, 2020.

What can FAST do?

Expected to map the neutral hydrogen gas in the Milky Way Galaxy at a very high resolution and increase the number of known pulsars, FAST can detect radio emissions from extrasolar planets that are similar to Jupiter. It should also be able to search for signals from extraterrestrial intelligence around many more stars. According to the FAST website, the objectives are:
- Pulsar observations
- Large scale neutral hydrogen survey
- Detection of interstellar molecules
- Leading the international very long baseline interferometry (VLBI) network
- Detecting interstellar communication signals
- Pulsar timing arrays
The telescope joined the Breakthrough Listen SETI project in October 2016 to search for intelligent extraterrestrial communications in the Universe.

Overview of the Project

FAST has a reflecting surface 500 meters in diameter located in a natural sinkhole in the karst rock landscape. This helps focusing radio waves on a receiving antenna in a feed cabin suspended 460ft above it. Made of perforated aluminum panels, the reflector is supported by a mesh of steel cables hanging from the rim.
The surface is made of 4,450 triangular panels, 36ft on a side, in the form of a geodesic dome.
Above the reflector, there is a lightweight feed cabin moved by a cable robot using winch servomechanism on six support towers. The receiving antennas are mounted below this on a Stewarrt platform, providing fine position control. 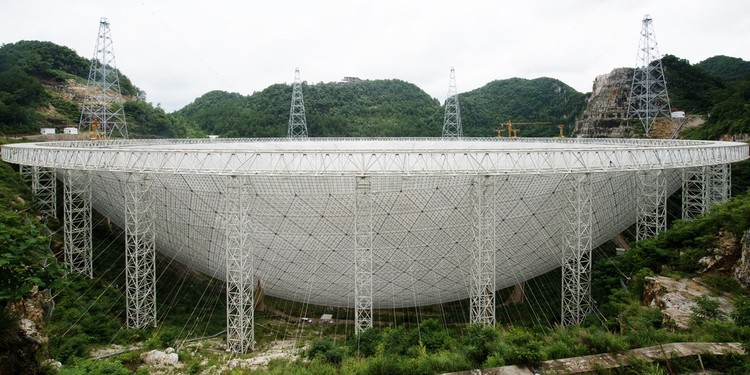 The basic design of FAST is similar to the former Arecibo telescope. Both projects had reflectors installed in natural hollows within karst limestone, and made of perforated aluminum panels with a movable receiver suspended above.
Also, both telescopes had an effective aperture smaller than the physical size of the primary. Yet, there are many differences between the two, not just in size. Yes, the idea of a large spherical dish in a karst depression is rooted in Arecibo telescope. Here are some differences.
For example, Arecibo’s dish was fixed in a spherical shape. Yes, it was suspended from steel cables with support underneath, but they were manually operated and adjusted only during maintenance. Simply said, Arecibo has a fixed spherical shape with two additional suspended reflectors.
The second difference is Arecibo’s receiver platform was fixed in place. The primary support cables were static, with the only motorized portion being three hold-down winches which compensated for the thermal expansion.
Third difference is Arecibo could receive higher frequencies.
Fourth, FAST dish is significantly deeper, which contributes to a wider field of view. FAST’s radius of curvature if 980ft, barely larger than the one of Arecibo, 870ft.
Fifth, and last difference, Arecibo’s larger secondary platform housed several transmitters, making it one of only two instruments in the world capable of radar astronomy.

Eye in the Sky

The complex project has seen its fair share of challenges before it was declared fully operational. For starters, it has a radical design. Initially, FAST struggled to attract staff because of its remove location. Yet, the pay-off for science will be immense. 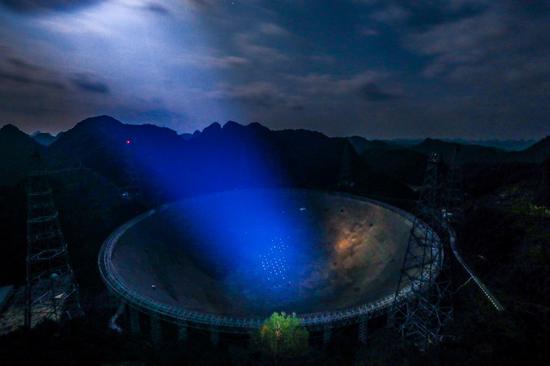 Testing began in 2016, with only Chinese scientists able to lead projects studying the preliminary data of the telescope. Now, observation time will be accessible to researchers from around the worwld.
Known as Eye of Heaven, the instrument examines only a tiny fraction of the sky at any one time. This might make it unlikely to discover many new FRBs.

Science
The MOSE Project in Venice – How to Stop Flooding
The MOSE project in Venice will be fully operational in 2023. At the time, the barriers will be raised when the water le...
What are the most Reactive Metals?
The alkali metals are the family of elements that contain the most reactive elements. These metals include lithium, sodi...
ITER – The Future of Energy
The goal of the project (ITER, short for International Thermonuclear Experimental Reactor) is to create a plasma of 500 ...
How to Detoxify the Pineal Gland
The pineal gland is believed to play a vital role in consciousness. Detoxifying it can be helpful in attaining higher le...