Excalibur – The Myth, The Legend, and Modern Version 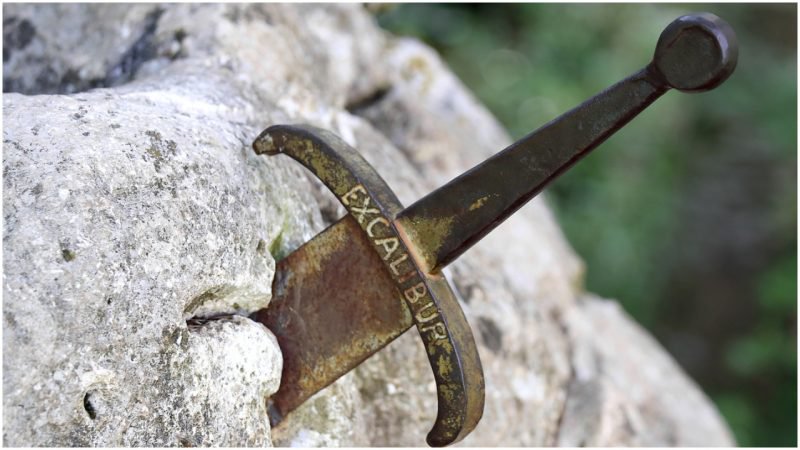 There are two legends regarding the origin of the Excalibur. The first one is the most famous legend regarding the sword, originally appearing in Robert de Boron’s poem Merlin

We all know Excalibur, that is the mythical sword of King Arthur, sometimes attributed with magical powers. The sword is also associated with the rightful sovereignty of Great Britain, as in whoever wields the sword, is the rightful ruler of Great Britain. Excalibur is also mentioned in legends, like the one about the Sword in the Stone. Even Disney made a movie about it. With that in mind, let’s revisit some of the legends and myths about Excalibur, and whether there is a modern version of the sword.

Excalibur and the Sword in the Stone

There are two legends regarding the origin of the Excalibur. The first one is the most famous legend regarding the sword, originally appearing in Robert de Boron’s poem Merlin. In this version, Excalibur is a sword embedded in stone, and can only be drawn by the rightful king of Britain. Whole Britain tries to pull the sword out of the stone, but nobody manages to do it. And then, Arthur comes over, a young boy, and he manages to do it.

The second legend was written by Sir Thomas Malory. In his version, Arthur receives the sword from the Lady of the Lake after breaking his first sword called Caliburn in a fight with King Pellinore. Arthur takes the stone from a hand rising out of the lake. And as he lays dying, he tells Sir Bedivere to return the sword to the lake by throwing it into the water. Sir Bedivere thinks the sword is too precious, so he twice only pretends to do so. He finally throws the sword to the lake, and just as the sword strikes the water’s surface, a hand reaches up to grasp it and pull it under. According to Sir Malory’s version, Arthur will return one day to save Britain from a threat.

- The sword was first time mentioned in a Welsh legend from 10th century, in a poem “Preiddeu Annwfn”. The sword is also mentioned in “The Mabinogion”, a collection of eleven prose stories collated from medieval Welsh manuscripts

- In play called Beunans Ke in the 15th or 16th century, Arthur’s sword is mentioned as Calesvol

- Geoffrey of Monmouth, a cleric and one of the major early British historians, mentions the sword in the History of the Kings of Britain, which was written in Latin

- In one legend, when the Excalibur was drawn for the first time by Arthur, in the first battle, the blade blinded his enemies with the light of thirty torches

In Disneyland in Paris, there is a sword in stone, just like the one from the movie and the stories. But the modern day version of the Excalibur lake is often believed to be Dozmary Pool on Bodmin Moor, Cornwall.

The lake is one of the many candidates. In 2017, a family from Yorkshire went there on a vacation. The legend of the Excalibur lake tells the lake is bottomless, but Dozmary Pool is known to be just a few feet deep. The family says that on the hot summer day in 2017, the daughter stepped into the shallow pool to cool off, and she spotted a sword on the bottom of the lake. And there was really a four-feet long sword laying in the mud, but it was just a regular sword.

Later, it was discovered that the sword was not Excalibur. Mark Wilkins claimed he put the sword in the Cornish Lake sometime in the 1980s as an offering to Celtic gods.