Dendera Temple the Home of Many Ancient Mysteries 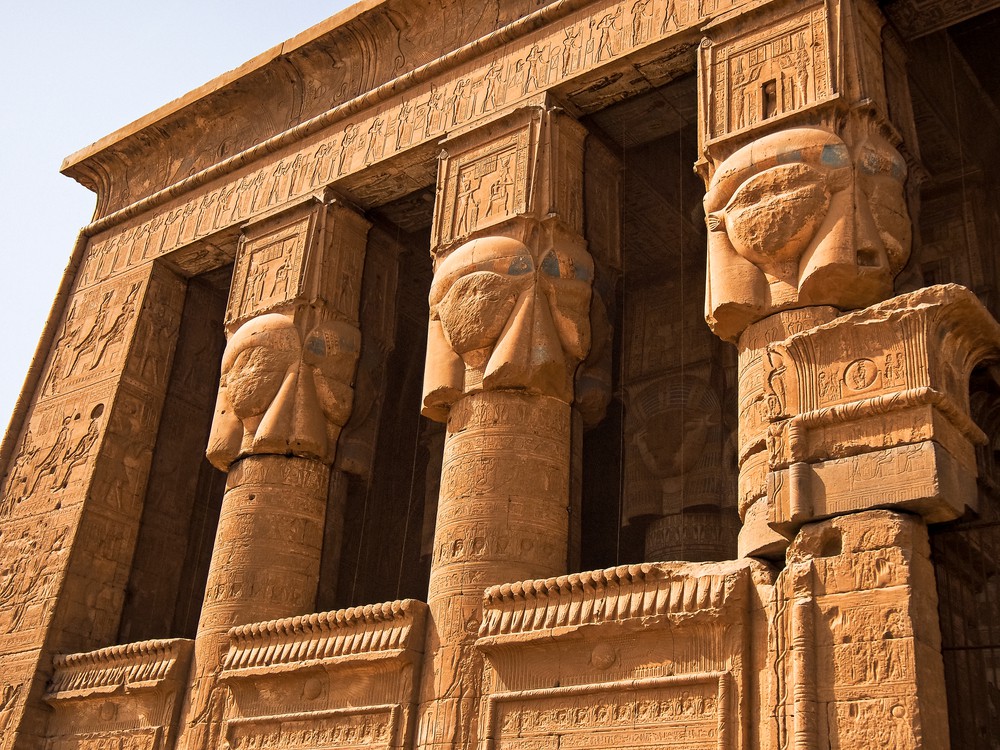 The Dendera complex has long been one of the most tourist-accessible ancient Egyptian places of worship. Up until 2003, it was possible to visit virtually every part of the complex. In 2003, the highest part of the roof of Hathror temple was closed. The temple was known as the Castle of the Sistrum or House of Hathor

Many people give credit to Benjamin Franklin for discovering electricity. He was one of the greatest scientific minds of his time. He explored many areas of science, made many discoveries, electricity being one of them. But about 2.5m south-east of Dendera, Egypt, lies a temple where electricity might have been a topic.

It is just one of the many fringe theories about the Dendera complex. It is one of the best preserved temple complexes in Egypt.

The Dendera complex has long been one of the most tourist-accessible ancient Egyptian places of worship. Up until 2003, it was possible to visit virtually every part of the complex. In 2003, the highest part of the roof of Hathror temple was closed. The temple was known as the Castle of the Sistrum or House of Hathor.

History of the Complex

In ancient times, Dendara was associated with healing. Patients traveled to the complex for cures. They were houses in special buildings where they could rest, sleep, and commune with the gods. The temple bears the name of Cleopatra and her Son, whose father was Julius Caesar.

Nowadays, the place sings with the music of birds. There have been temples on the site since the Old Kingdom. The present temple was constructed between 116BC and 34AD. Construction began during the reign of Ptolemy VIII.

Hathor, who bears the name of the main temple, was the goddess of love, joy, and beauty. You can find her image sculpted on the supporting pillars. However they were defaced by the Christians. The walls, roof, and rooms, however, are extraordinarily well preserved.

The main highlight of the complex is the majestic temple of Hathor. It was built in the 1st century BC by Pharaoh Ptolemy VIII and Queen Cleopatra II. The temple immortalized their names in history and honor the deity Hathor.

The temple contained a great hall full with 18 massive decorated columns. The walls of the great hall contain hypnotic scenes depicting offerings made by Roman emperors. The magical ceiling is filled with enhancing astronomical decorations, for example, the sky deity Nut.

The temple of Hathor has been the birthplace of some of the most controversial fringe theories. For example, the carving of a Djed pillar and a lotus flower spawning a snake within it. Some believe it is proof that Egyptians obtained electric lighting devices resembling a light bulb. However, there is no proof for this theory. 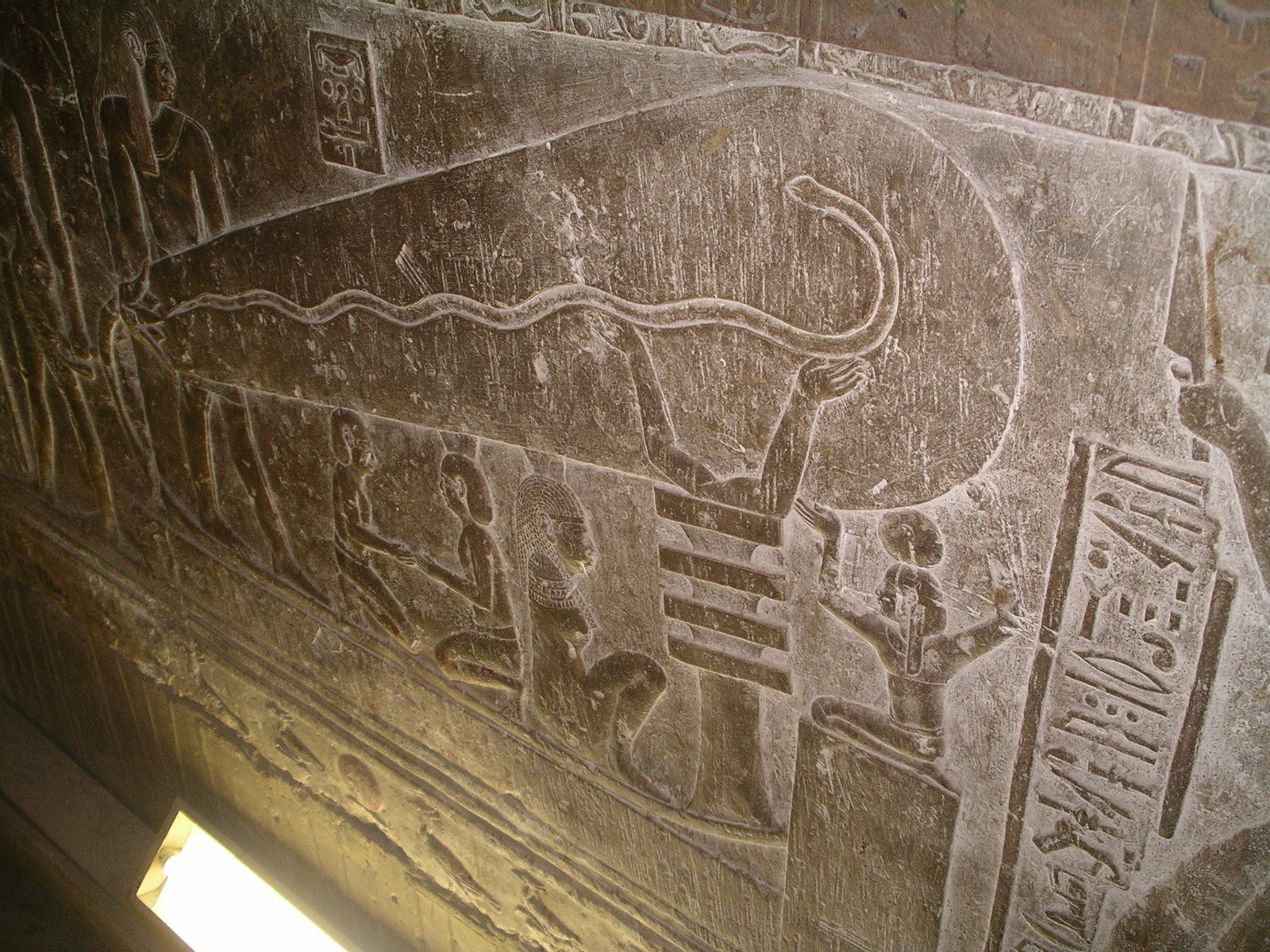 The more logical answer is that the mythological depiction represents aspects of Egyptian mythology.

Another mystery of the Dendera temple is the melted stairs. They lead up to the temple roof. These stone steps appear to be melted. And it is hard to imagine what could have melted solid stone steps at the time of the building. 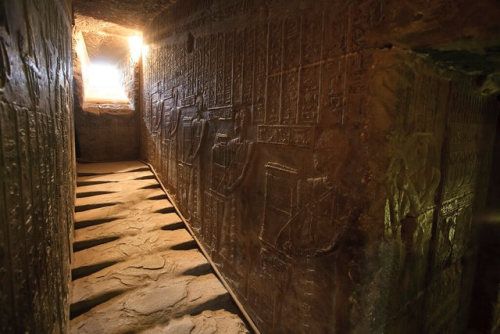 The temperatures would have to have been tremendously high. Think nuclear explosion. Now, the site was built over an even older site, but there is no conclusive proof of this. Maybe that is the reason the stairs are melted.

The main attraction of the temple is the mystical Zodiac signs. They are map to the stars on a plane projection showing 12 constellation found at the Osiris chapel at the Hathor temple. They contain images of the ram, bull, heavenly twins, crab, lion, virgin, scales, scorpion, archer, goat, watering pots, and fishes with glittering tails. In 1820, the real Zodiac was removed from the temple ceiling by French invaders. They took it to Louvre, and replaced the original with a fake one. 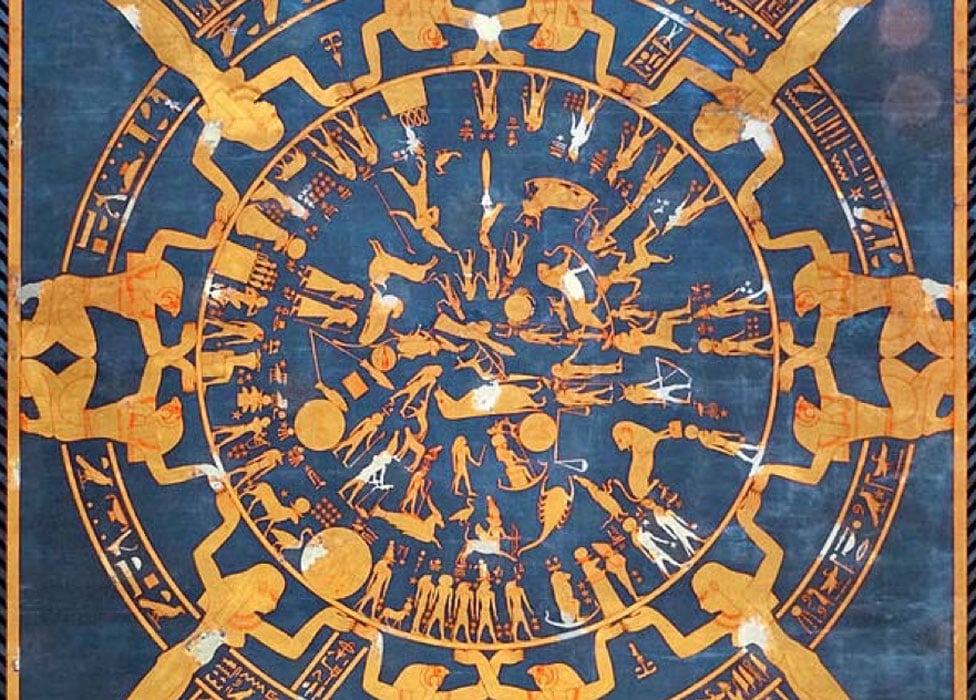